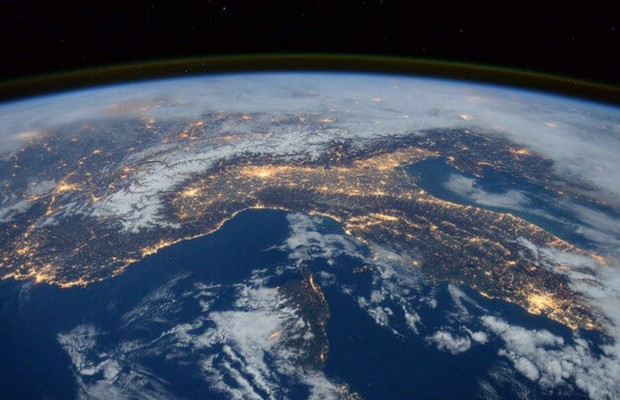 In honour of Earth day 2017, NASA realised some breathtaking photos of the planet we live on. Spectacular shots from above are showing us a beauty of the Earth that we can not be aware of living our everyday lives. So, this gallery deserves your full attention and time to enjoy each photo, to realise what it actually presents and to learn what people from NASA said about a particular shot. Happy Earth day!

“Bermuda is a British Overseas Territory in the western Atlantic off the east coast of North America.” 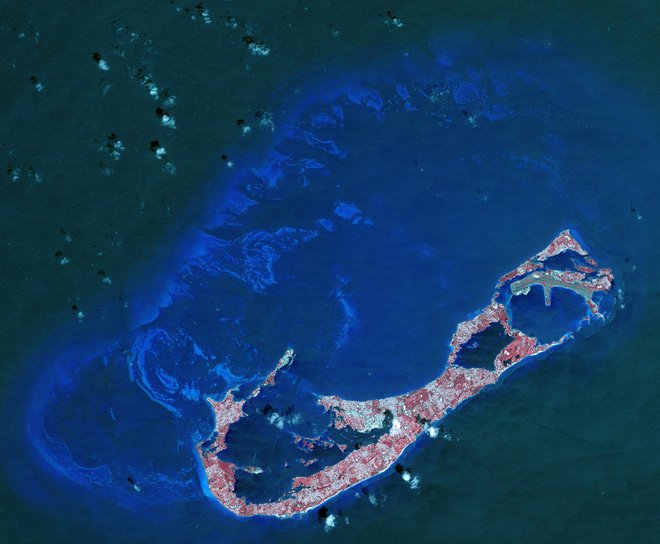 “NASA’s Earth Observatory has tracked down images resembling all 26 letters of the English alphabet using only NASA satellite imagery and astronaut photography. In this image, the letter ‘Y’ is for yardangs, elongated landforms sculpted by erosion and similar to sand dunes, but instead comprised of sandstone or siltstone.” 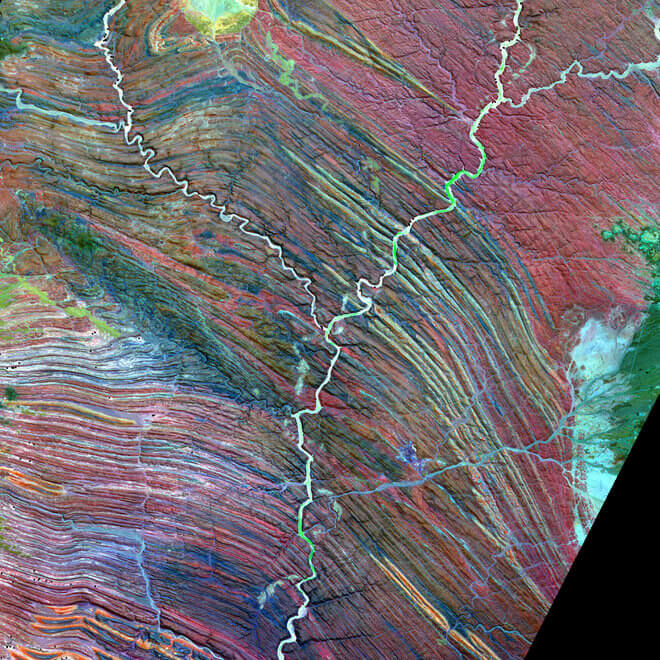 “Astronauts aboard the International Space Station took this detailed image of a tiny island with many concentric zones around it. Adele Island, off Australia’s north coast, is only 2.9 km (2 mi) long, but the entire tidal zone with all the concentric zones is 24.5 km (15.2 mi) long, surrounded by extensive sandbanks in the tidally exposed area.” 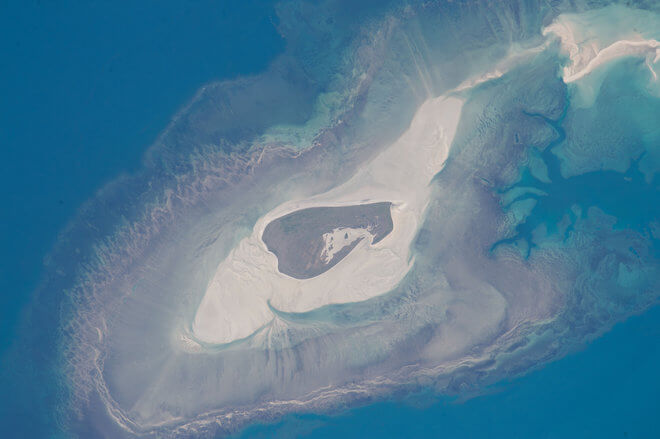 “On Oct. 12-13, 2015, NASA astronaut Scott Kelly shared a series of seventeen photographs taken from the International Space Station during a flyover of Australia.” 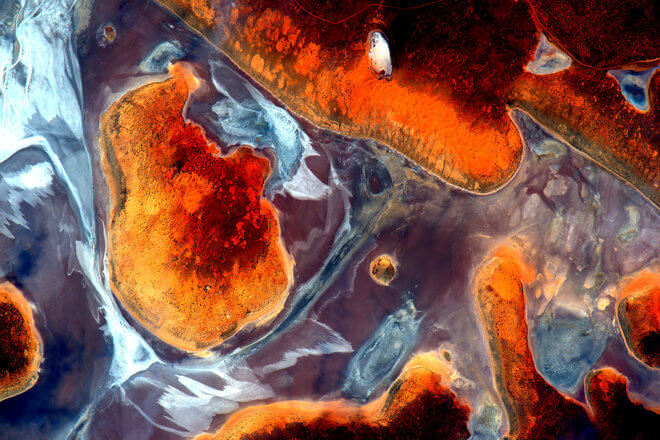 “Here is a view of Earth and its moon, as seen from Mars. It combines two images acquired on Nov. 20, 2016, by the HiRISE camera on NASA’s Mars Reconnaissance Orbiter, with brightness adjusted separately for Earth and the moon to show details on both bodies.” 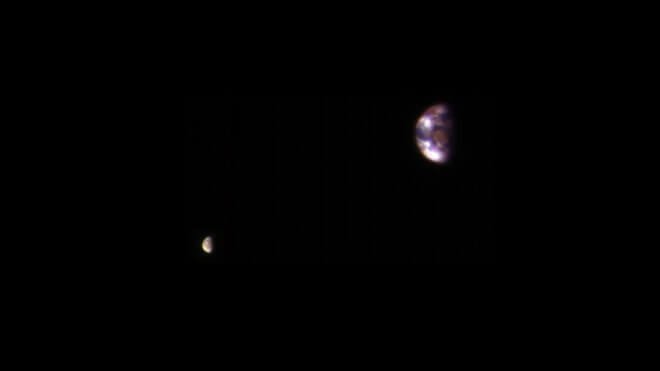 “NASA scientists are releasing new global maps of Earth at night, providing the clearest yet composite view of the patterns of human settlement across our planet. This composite image, one of three new full-hemisphere views, provides a view of the Americas at night.” 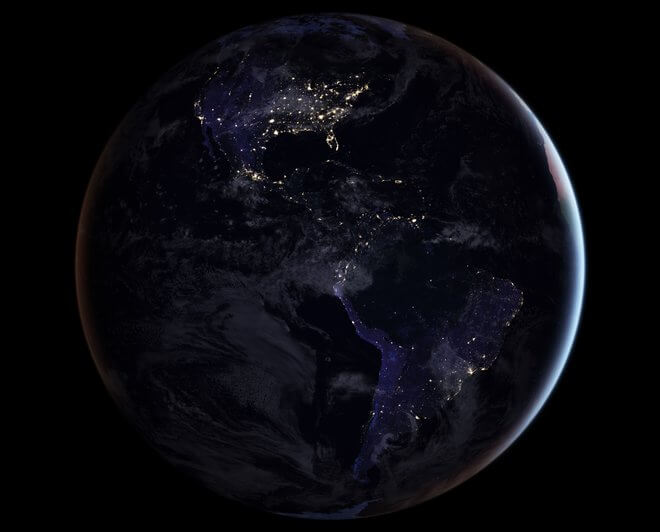 “As scientists and crew with NASA’s Operation IceBridge mission prepared for a research flight on Nov. 5, 2016, the weather in Punta Arenas, Chile, was cold, wet, and windy. But when they reached their survey site in West Antarctica, skies were clear and winds were calm — a perfect day for scientists to collect data over the Getz Ice Shelf.” 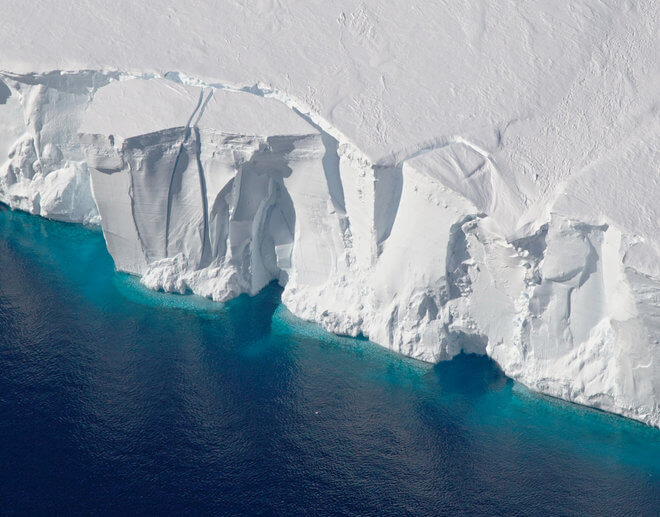 “This photograph of the Florida Straits and Grand Bahama Bank was taken during the Gemini IV mission during orbit no. 19, on June 4, 1965. The Gemini IV crew conducted scientific experiments, including photography of Earth’s weather and terrain, for the remainder of their four-day mission following Ed White’s historic spacewalk on June 3.” 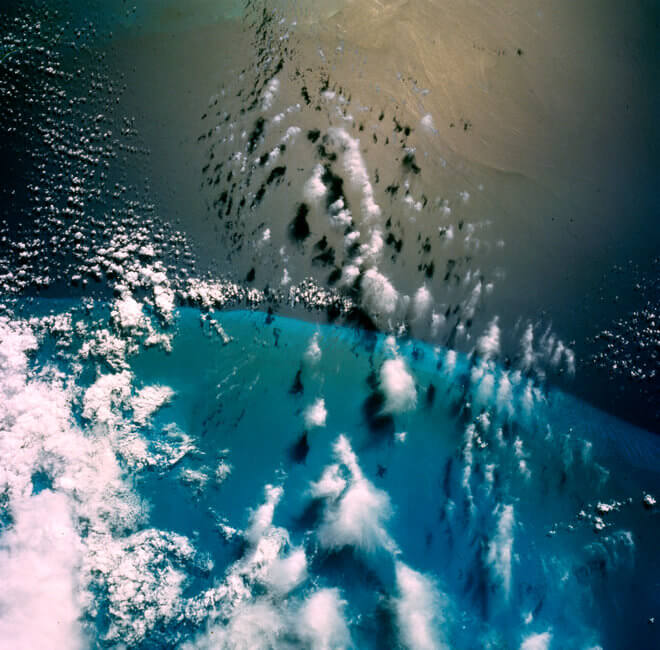 “To celebrate the centennial of the U.S National Park Service, Expedition 48 Commander Jeff Williams of NASA has taken hundreds of images of national parks from his vantage point in low Earth orbit, aboard the International Space Station. Here, a series of Williams’ photographs are assembled into this composite image of the Grand Canyon.”

“An astronaut aboard the International Space Station took this photograph of small island cays in the Bahamas and the prominent tidal channels cutting between them. For astronauts, this is one of the most recognizable points on the planet. 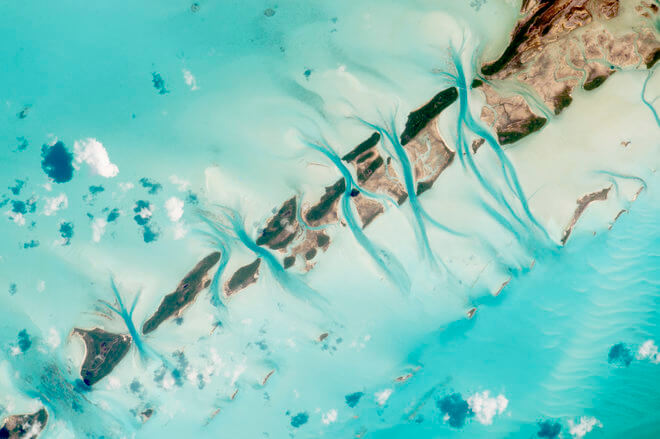 “The Larsen Ice Shelf is situated along the northeastern coast of the Antarctic Peninsula, one of the fastest-warming places on the planet. In the past three decades, two large sections of the ice shelf (Larsen A and B) collapsed. A third section (Larsen C) seems like it may be on a similar trajectory, with a new iceberg poised to break away soon.” 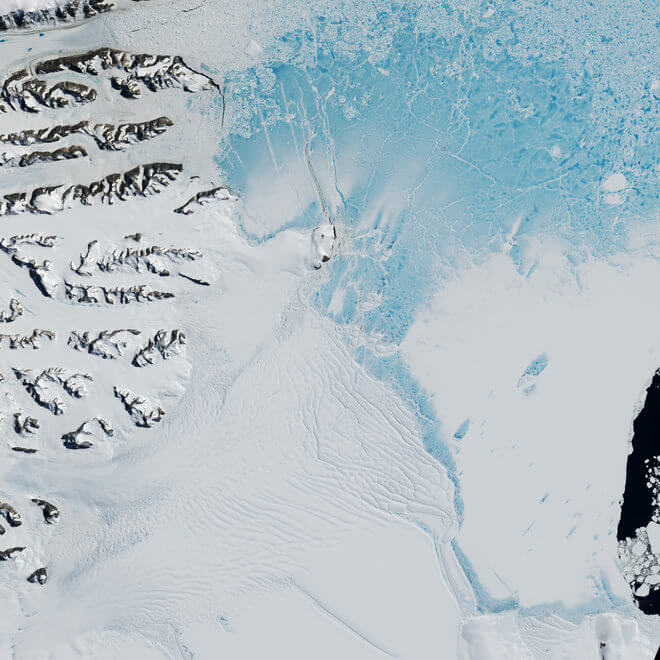 “This composite image of the Mount Brandberg Nature Reserve in Namibia, Africa was put together at the Johnson Space Center in Houston from several International Space Station images. Expedition 47 crew members photographed the middle of a vast African desert.” 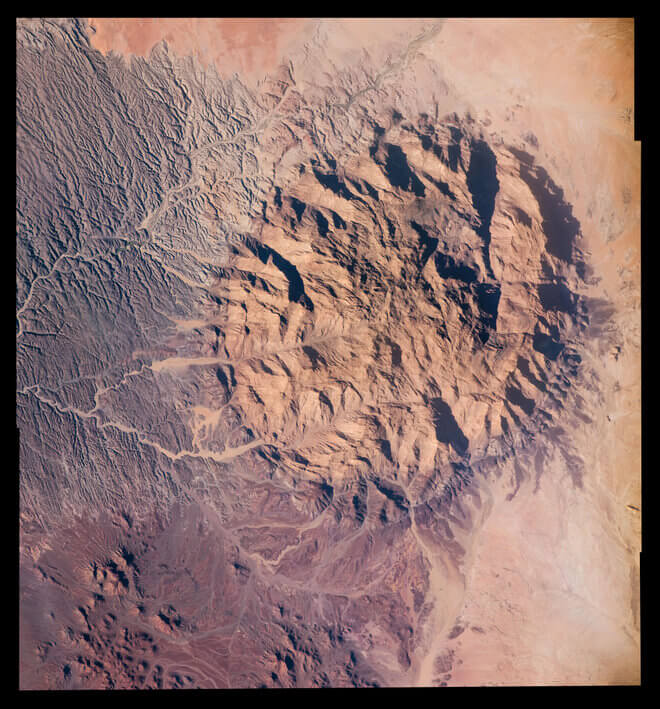 13. Green and Windy – The MacKenzie River in Canada’s Northwest Territories.

“This view, acquired on Nov. 7, 2016, by the Operational Land Imager (OLI) on Landsat 8, shows a portion of Canada’s Mackenzie River Delta and the town of Inuvik, home to more than 3,000 people. A frozen highway — 194 kilometres (120 miles) long — runs between the remote outposts of Inuvik and Tuktoyaktuk along the river’s East Channel.” 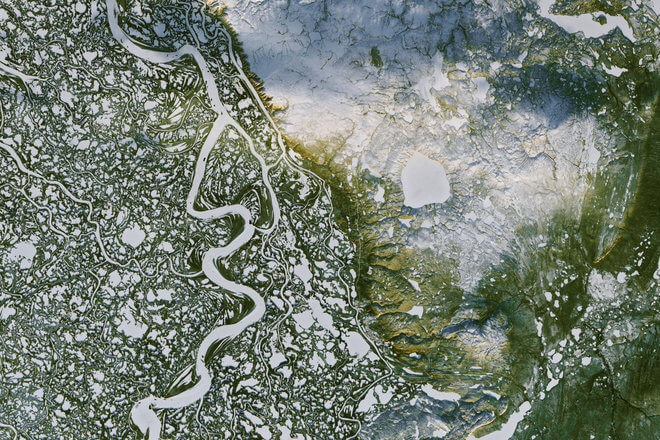 “During an International Space Station flyover of Australia, NASA astronaut Jeff Williams captured a colourful image of the coast and shared it with his social media followers on March 29, 2016, writing, ‘The unique terrain of the northwestern Australian coast.'” 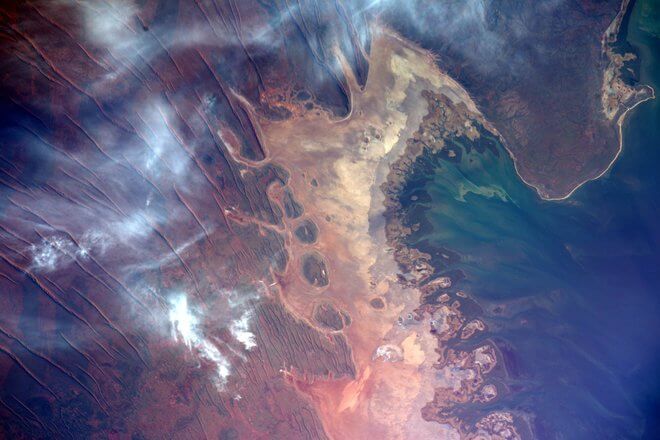 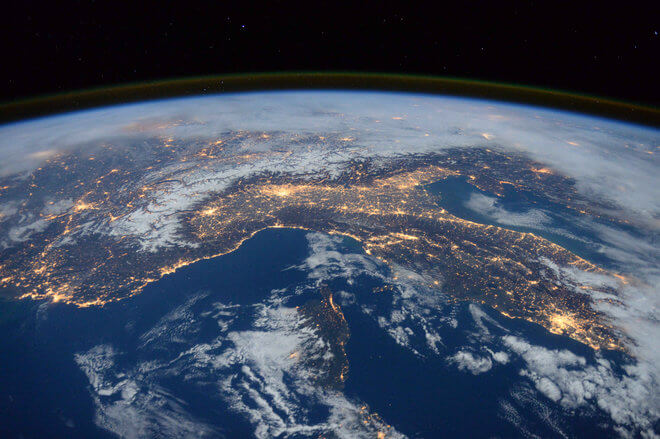 “An astronaut aboard the International Space Station (ISS) used a long lens to document what crews have termed one of the most spectacular features of the planet: the dunes of the Namib Sand Sea.” 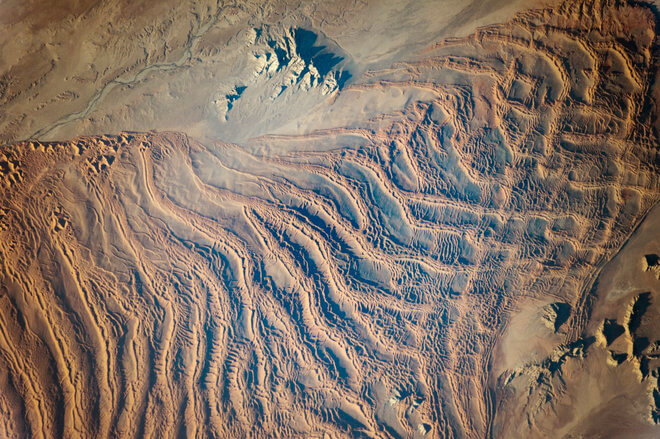 “Expedition 50 Flight Engineer Thomas Pesquet of the European Space Agency photographed the Rocky Mountains from his vantage point in low Earth orbit aboard the International Space Station. He shared the image with his social media followers on Jan. 9, 2017, writing, ‘the Rocky mountains are a step too high – even for the clouds to cross.'” 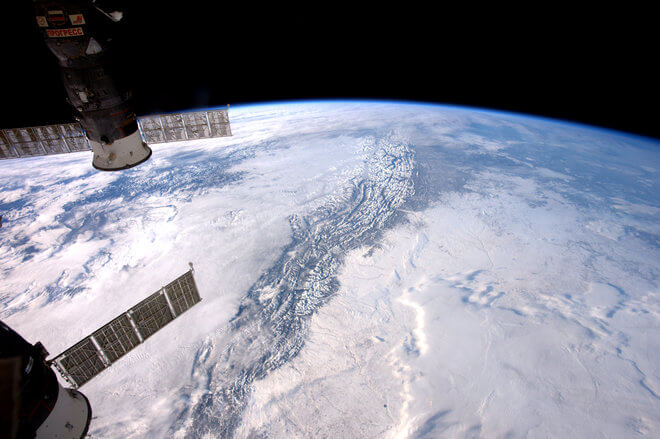 “Middle school students programmed a camera aboard the International Space Station — the Sally Ride EarthKAM — to photograph this portion of the Sahara desert in western Libya on October 3, 2016. The Expedition 50 crew set up the EarthKAM gear in the Harmony module’s Earth-facing hatch window, to allow students to photograph targets on Earth.” 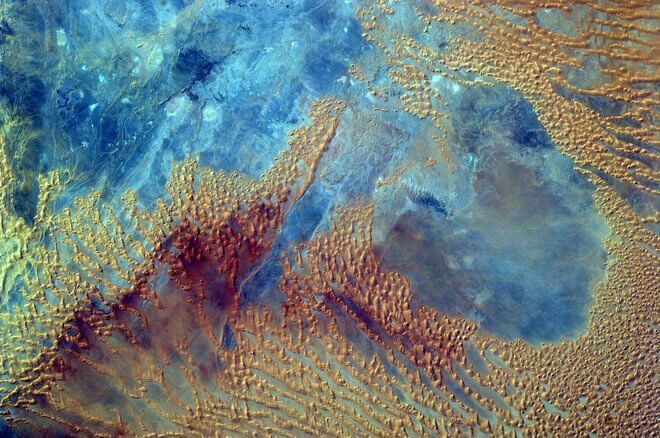 “The remotely controlled Sally Ride EarthKAM aboard the International Space Station snapped this striking photograph of South Africa on Feb. 9, 2016. The EarthKAM program allows students to request photographs of specific Earth features, which are taken by a special camera mounted on the space station when it passes over those features.” 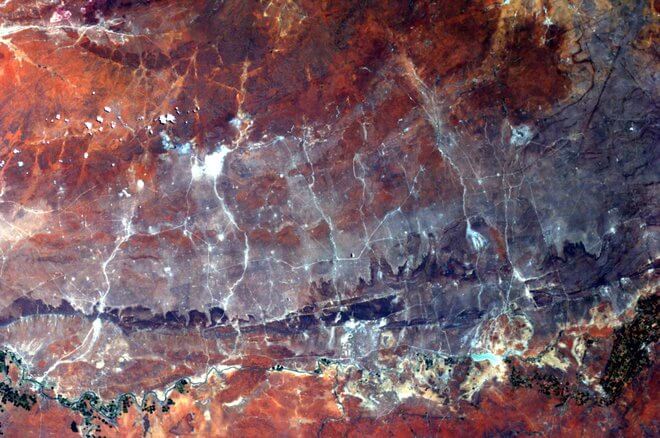 20. The Pacific Ocean with sunglint –

“This Earth observation composite image from the International Space Station captures morning sun glint and low clouds over the central Pacific Ocean. The image was put together at the Johnson Space Center in Houston, from a series of photographs taken by Expedition 47 Flight Engineer Jeff Williams on March 25, 2016.” 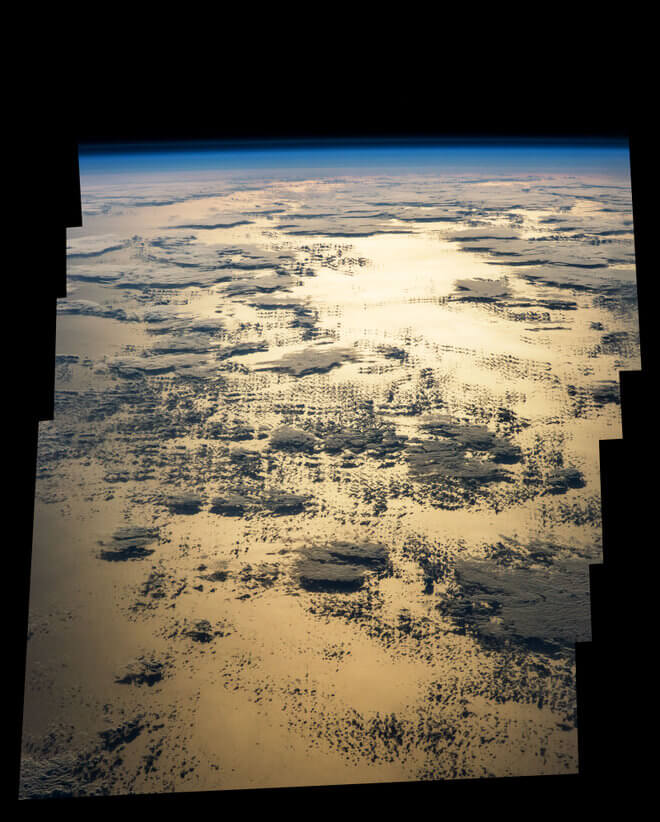 “Expedition 50 Flight Engineer Thomas Pesquet of the European Space Agency shared this photograph from the International Space Station on Feb. 14, 2017, writing, ‘Venice, city of gondoliers and the lovers they carry along the canals. Happy Valentine’s Day!'” 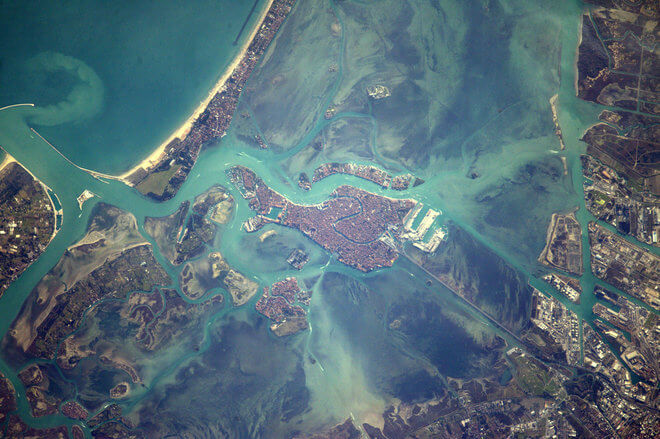 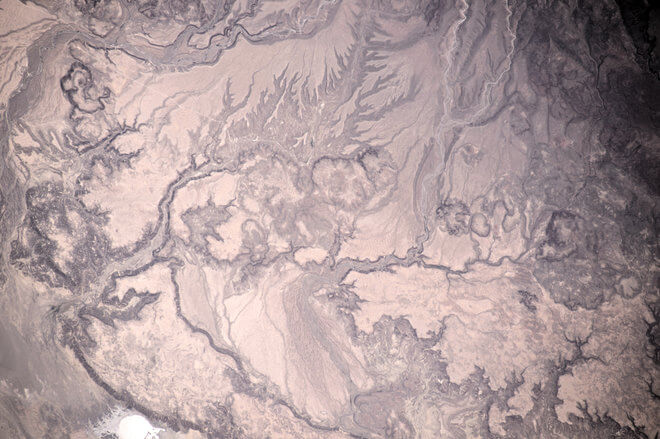 23. Whirling and Swirling –  the Gulf of St. Lawrence.

“Orbiting above eastern North America, a crew member on the International Space Station photographed a dense pattern of eddies in the Gulf of St. Lawrence. Caught briefly in the Sun’s “glint point,” reflections off the water surface show an interlinked mass of swirls and eddies in the shallow water north of Prince Edward Island.” 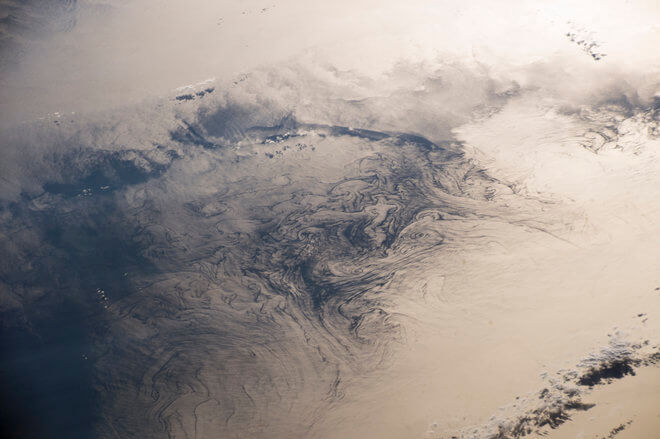 “Yamzho Yumco (Sacred Swan) Lake in Tibet is surrounded by snow-capped mountains and is one of the three largest sacred lakes.” 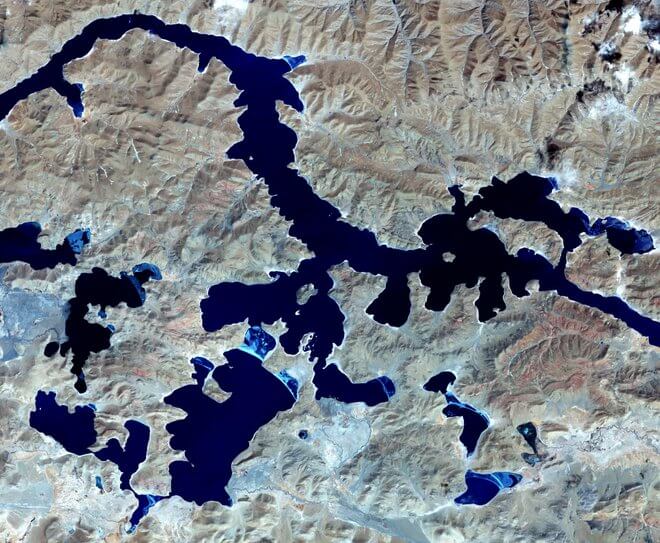 “Just hours after the winter solstice, a mass of energetic particles from the Sun smashed into the magnetic field around Earth. The strong solar wind stream stirred up a display of northern lights over northern Canada.” 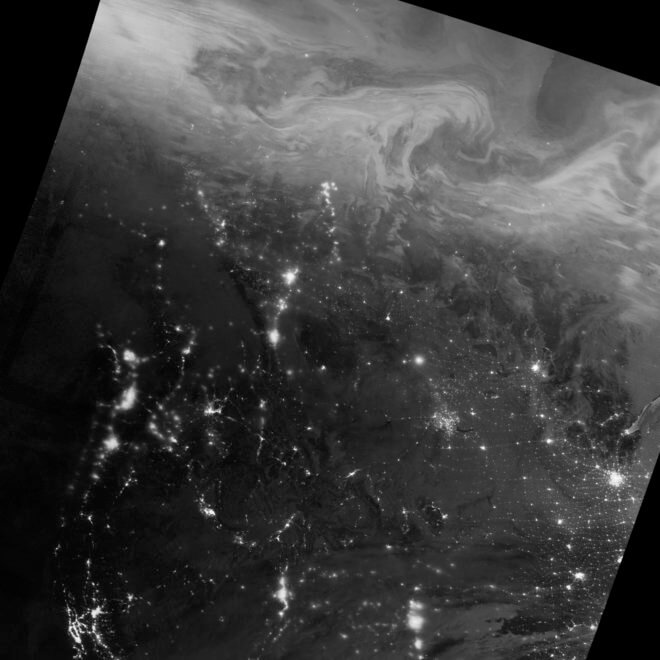