Facts about Gremlins that every true fan got to know

by Ramona Kab
in Movies, Trending
0

Some of us are just old enough to remember the cute fuzzy face Gizmo from the movie Gremlins. We might even remember more vividly the face of Stripe, the evil gremlin leader in the film. In this post, we are paying tribute to the movie by presenting 24 facts about Gremlins.

Gremlins was considered to be one of the best films released in 1984. The movie follows a gadget salesman who happened to pick up a cute creature called a ‘mogwai’ from a store in Chinatown and named it Gizmo. Creatures like Gizmo are considered to be in the first stage of the gremlin’s 3-part life cycle.

After evolving into a cocoon in the second stage, they then become gremlins. The shopkeeper warned him never to expose it to bright light, water, or feed it after midnight. Unfortunately, all of these prohibited things happen to unleash a gang of gremlins takes over the town on Christmas Eve. 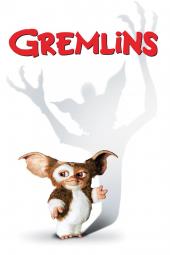 Gremlins had a stellar team with Steven Spielberg overseeing it. The film was written by Chris Columbus who also wrote the screenplay for The Goonies and directed by Joe Dante of The Twilight Zone: The Movie. And it still continues to be one of the most beloved fantasy-horror comedies of all time.

Here are 24 facts you may not have known about Gremlins. 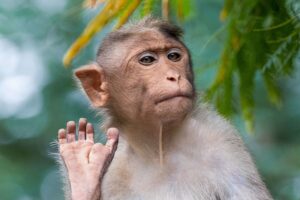 Since there was no CGI back then, producers considered putting monkeys in gremlin costumes so they could easily film scenes where the creatures were supposed to be climbing and moving. This idea was promptly axed when, after putting a gremlin mask on a monkey as a test, director Joe Dante’s office was destroyed.

The filmmakers decided to do the film entirely with practical effects instead. Using puppets proved to be plenty of work for the cast and the crew, but it paid off in the long run.

2. The movie influenced the creation of the PG-13 rating.

Along with a couple of other movies, Gremlins prompted the Motion Picture Association to create the PG-13 movie. Many audience members felt that a PG rating was not sufficient for the violent scenes in the movie but did not merit an R rating. Thus, the PG-13 rating was created.

3. They used the same set as Back to the Future.

4. Stripe and Gizmo were supposed to be the same character. 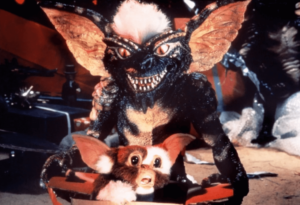 During the film’s development, Gizmo and Stripe were planned to be the same character with one good side and an evil one. However, Steven Spielberg suggested that they be separate. This was so that the audience could have a good gremlin to identify with and an evil one to root against. The director has been said to favor this decision, calling it one of the reasons that the film is still so fondly remembered today.

5. There was a Texas Chainsaw Massacre homage.

The department store scene where Stripe attacks Billy with a chainsaw was inspired by The Texas Chainsaw Massacre. While it wasn’t originally in the script, director Joe Dante and actor Zach Galligan added it to pay homage to the film.

In Cantonese, “mogwai” translates into “demon” or “devil.” Its pronunciation in Mandarin is “mogui.” 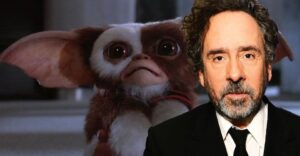 As a producer, Steven Spielberg nearly hired Tim Burton to direct Gremlins after seeing a few of his short films. However, Burton had not yet directed a feature-length film at the time, so Spielberg decided against it. It would have been interesting to see what approach Tim Burton would’ve taken if he directed Gremlins!

8. The Gremlins were expensive.

While some of the mogwai and gremlins were puppets, many of them were actually animatronics. Each cost between $30,000 to $40,000! According to Zach Galligan, security would check every cast and crew member’s car trunk to ensure that nobody would steal them!

9. There’s a The Twilight Zone Easter egg in the movie.

When Billy takes Pete up to his room to show him the mogwai, there’s a rolled up movie poster for Twilight Zone: The Movie rolled up in the frame. This is likely because director Joe Dante directed the Twilight Zone film earlier that year.

10. The Gremlins were voiced by known voice actors. 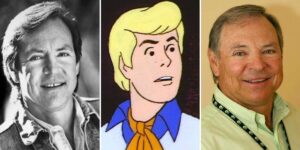 If you’ve ever watched Scooby-Doo, then you may be surprised to know that Frank Welker voiced both Fred Jones and the gremlins! Even though the gremlins don’t say that much, Welker was chosen to provide their voices rather than using artificial sound effects. Michael Winslow also voiced some of the gremlins. He’s most famous for being in Police Academy and Spaceballs.

11. Gizmo was also voiced by someone famous.

Gizmo was actually voiced by comedian and actor Howie Mandel with no alterations or special effects. Mandel was known for using the same voice in his stand-up act, and he would go on to use it again for the lead character in the ’90s animated cartoon series called Bobby’s World. The only part he didn’t voice for Gizmo was the mogwai’s song.

12. There is also a Star Wars Easter egg.

If you look closely enough at the bar scene, the Gremlin is actually playing a Star Wars video game.

13. The crew hated working with the mogwai puppets. 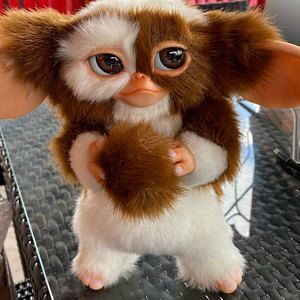 The puppets for Gizmo were particularly difficult to operate because of the small size, resulting in several frustrated crew members. In fact, the scene where gremlins throw darts at Gizmo was written in so that the crew could get their so-called revenge.

14. The gremlins were inspired by a rodent problem.

Chris Columbus conceptualized gremlins not because of some twisted imaginative thinking but due to a rat infestation he encountered. While he was attending film school in New York, Columbus lived in a loft that was pleasant enough during the day. However, the rats would pitter-patter around the place at night, making it really creepy. This inspired him to pen a story about an army of creatures that caused mischief in the dead of night. The idea eventually morphed into the screenplay of Gremlins.

15. The entire cast fell asleep during one night shoot.

There was a serious issue with the gremlin puppets during one night shoot that the entire cast fell asleep on set! This is really the funny one among facts about Gremlins.

16. In the original script, gremlins were supposed to eat people. 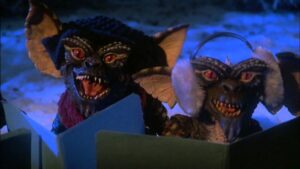 There was a scene in the original script where gremlins ate customers instead of burgers after attacking a McDonald’s. However, this was too violent, so it wasn’t included in the film.

17. Joe Dante didn’t expect the film to be a success.

Director Joe Dante was quoted saying, “I still have no idea why this picture was successful” after the movie’s release. Well, thank goodness it was!

18. Gremlins was the last movie shot on particular film stock.

The Eastmancolor 125T film stock was used to shoot this movie. It was the last picture film to do so since the film stock was discontinued soon after the shooting was over.

19. The new mogwai were made of balloons. 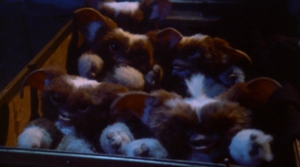 When Gizmo gets wet and produces new mogwai, the audience can see the fuzzball growing and expanding onscreen. This was thanks to balloons, which were inflated gradually to mimic the appearance of growing fur balls.

If you ever thought Furby toys looked somewhat familiar, you’re probably thinking of how similar they look to the mogwai in Gremlins. In fact, Warner Bros. sued the makers of Furbies. Tiger Electronics, which created the toys, acknowledge the resemblance and paid Warner Bros. a seven-figure settlement. They also promised to redesign Furbies to look less like Gizmo.

21. Gremlins seemed to be a fan of Disney films.

In the film, while the gremlins were watching Snow White and the Seven Dwarves, one of the gremlins can be seen wearing a set of Mickey Mouse ears. What a fan!

22. Sylvester Stallone agreed to be parodied. 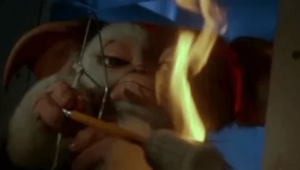 In Gremlins 2, Gizmo finally shows a tougher side as he proceeds to get revenge on the evil gremlins. The film producers decided to ask Sylvester Stallone himself rather than having to go through studio executives or lawyers if they could parody a scene from Rambo.

In the Gremlins sequel, Gizmo is seen being inspired by a Stallone’s character, donning a bandana with a flaming bow and arrow. Thankfully, Sylvester Stallone freely gave his permission for this scene to be done.

The Scottish rock band Mogwai reportedly got their name from this film!

While most moviegoers might prefer the first Gremlins film, critics and even director Joe Dante himself say they prefer Gremlins 2. This is no surprise for Dante, considering he had more creative control over the film. He reportedly said that he could take the concept further and make the second movie less mean-spirited.

If you enjoyed these fun facts about Gremlins, you can look forward to our other posts on movie trivia!

The Original Inspiration for Batman's Cape