What a wonderful world! Miracles like the one that happened recently in Primorye Safari Park makes you think this and maybe even sing a rest of the famous song. And what happened in the park was that the hunter and the prey became best friends on everybody’s great surprise. Timor(the goat that still was nameless at the time) was meant to be a live food for Siberian tiger Amur. But Amur just didn’t want to eat him.

“Nobody taught the goat won’t be afraid of the tiger. So, Amur decided not to mess with the fearless goat, and didn’t eat it,” explains the park. “During the day, Amur and Timur walk together like a pair of good friends. Timur takes Amur for an alpha male, and follows [him] everywhere. Timur’s fearlessness and caution have led to such a paradoxical result.”

Amur, who was fed regularly with live food since then, became a real buddy to Timor and even acts protective towards him. According to one of the park officials, Amur “hissed at an employee who feeds the tigers, as if to tell him, ‘Hey, don’t you ever approach my friend.’ Before that, he never showed any aggression towards staff.” Nobody is sure what happened there and if maybe Amur will switch back to his previous behaviour. For now is nice to see this kind of unusual friendship.

“What a wonderful world…”  enjoy the gallery and video! 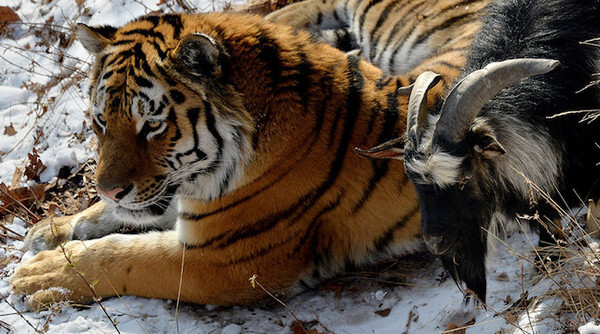