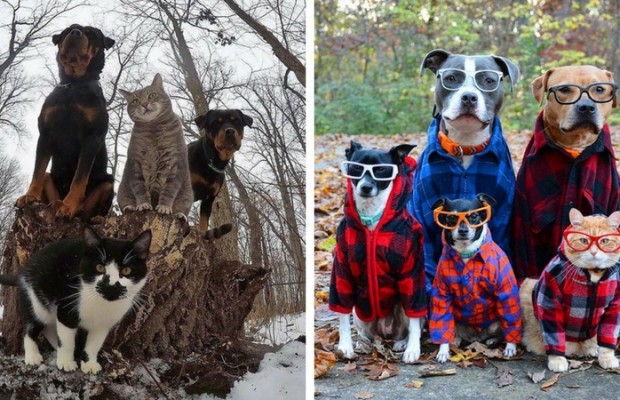 Here we have a huge collection of animal pictures but of a very particular kind. These animals know how to pose! Every one of them has a specific altitude so sharp that can easily make an album cover. When you scroll down the gallery you probably hear some lyrics along the way, that’s how inspiring they all look like.

Have your own example of a hot rising star posing for the album cover? Please share with us in the comments!

1. Are you gonna fly our way

4. Our band is called Shy guys and this is our first cover

5. Grunge band on their way up. You’re yet to hear about these cool guys.

7. I’m about to spill the greatest rap hit ever.

8. Rage against the freez

9. Yes, Justin Bieber influenced our music, but we have our own style.

10. Our songs are so deep even we don’t understand them.

11. I was made for lovin’ you, babe… Kiss tribute band

13. The Hot Cheeks, performing tonight at your town

18. It was tough decision, but I think I always wanted a solo career

24. My idea of us crossing the street for the cover was better

27. Clap along if you feel like a room without a roof

31. Emo rabbit posing for the cover

35. The best hip hop album of the year

37. Welcome to our block

39. Around the world with cow

42. I made it! Emerging new artist of the year

Related ItemsnewsWow
← Previous Story Can Dogs Eat This? Check Out This Ultimate 150 Types Of Foods Guide
Next Story → This Cat Hugs Sick Baby And Stays By His Side Every Day