Home / Animals / 37 if Animal Names Were Honest Photos that Show How it Would be Like. Spoiler, It’s Hilarious

37 if Animal Names Were Honest Photos that Show How it Would be Like. Spoiler, It’s Hilarious 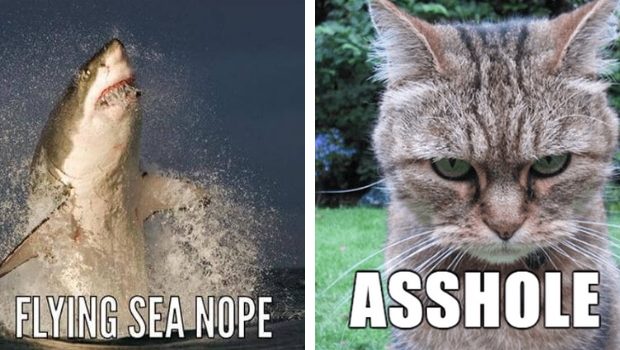 Have you ever wondered how animals were named? Most animal names do not even make sense by describing them in any way. What if animal names were honest? How would that look?

For example,  I was always fixated with ‘rabbit’. It made no sense that such a name was put to a fluffy and adorable animal. I always thought that ‘rabbit’ would best fit the frog as it is similar to the sound the frog makes.

Anyway, people are starting to give animals names they think they should have. And let me tell you, these names are not only true in describing the animal, but they are hilarious. These are the names animals would have if we lived in a world where animal names were totally honest.

If animal names were honest #1 The beach chicken.

We all know that seagulls look like a very familiar animal. Yup, everybody has been thinking this… A seagull totally looks like a chicken that lives near the sea. It is just hilarious to think that these two animals look like second cousins.

Whoever came up with the name ‘mosquito’ might have lost his mind. How could you name such an irritating animal with something that sounds like it’s a fancy French dish? The only things mosquitoes do is poke us with that disgusting needle-looking mouth of theirs.

I do not think this creature should have that name. In fact, the ‘nope’ should be written in all capital letters. This is because huge spiders such as this one make your legs shiver from disgust and gives you an urge to leave earth and go to another planet once and for all.

Yes, of course, we all needed to hear this. The killer whale looks just like a panda that prefers swimming over climbing on trees.

This is exactly what I was talking about in the beginning. A cute animal such as the rabbit deserves a name as perfect as Booplesnoop to describe the amount of adorableness it has. Thankfully someone out there was on my side.

Now I know that most of us have not seen an owl live (I haven’t) but doesn’t the owl just look familiar? Owls just look like the head of a cat with wings. I guess that’s why they stay active during the night; they are sneaky just like cats!

The only thing that separates a squirrel and a skunk is that they are different in color and that skunks fart. So why call it a skunk when it is simply a stinky farting squirrel?

It totally blows my mind that the alpaca looks as if a giraffe and a sheep had a love child. It is hilarious.

I know that you have thought of it before and have even come up with the name yourself. That is because seals act and look just like dogs. It has even been questioned if these creatures have some kind of connection.

The platypus is such a confusing animal. It has the face of a duck and the body of a small puppy. What a cute mix.

Sindy is all about art and animals. While she just recently started writing for our site, you can be sure she has vast experience writing about everything art. When she's not working, you will probably see her playing with her dogs or just chilling.

Read all posts from Sindy Hoxha

Related ItemsANIMALSfunnyhonestnews
← Previous Story This is the Automatic Feeder for Dogs That Prevents Your Dog From Gaining Weight
Next Story → The Zooz Electric Bike Can Take You Faster Through The City, Without Polluting The Air