Home / Animals / Shaq The Pug is Not Your Average Pug. He’s The Most Adorable Pug On Instagram Right Now

Shaq The Pug is Not Your Average Pug. He’s The Most Adorable Pug On Instagram Right Now 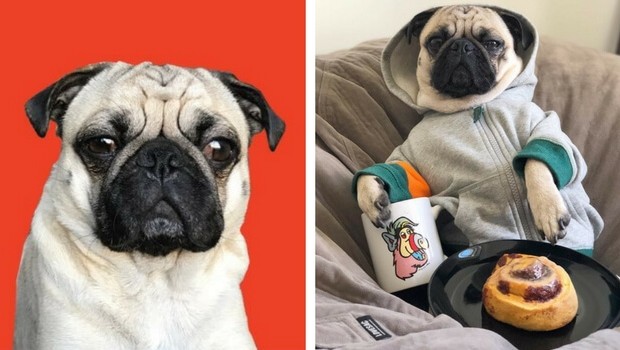 Have you met Shaq the Pug yet? If you had you would’ve remembered him, trust me, because he is not an ordinary pug. Shaq was rescued in October 2016 from a shelter and since then he lives in Burbank CA with his owner Rob (28) and his fiance Monica. What is so special about Shaq is that he is living like a king now and his lifestyle brought him the status of celebrity in Social Media world.

His owner loved pugs his entire life and when he finally adopted one, that love and love he has for Social Media, resulted pretty quickly in enormous popularity of Shaq’s accounts on Instagram, Twitter, and Facebook.
He has more than 120k followers on Instagram currently and many brands want to work with the not your average pug. Check out in the gallery below some photos of Shaq and learn what the owner said about him and his popularity for The Awesome Daily. And of course, don’t forget to follow Shaq’s glamorous life on Instagram.

“Shaq was adopted at Pug Nation LA at the age of 3 years old.”

“His tagline is “Not your average Pug” because he definitely is not, he’s super photogenic and very kept to himself not seeking attention.”

“Most his photos take about 1-3 takes which people are really amazed when they see him taking photos.”

“Shaq is known on Instagram for his witty captions and trendy photos dressed up in human clothes.”

“His growing popularity is attracting brands to work with him.”

“We just got back from a trip to Chicago for the Launch of Miller Coors new beer they introduced called Two Hats.”

Related ItemsANIMALSnews
← Previous Story 20 Bottle Cap Crafts That Are So Cool Anyone Can Make Them
Next Story → Beware! Hot Chicks on The Horizon. Stunning Chicken Portraits by Moreno And Monti Matteo Tranchellini