How Do Snakes Sleep With No Eyelids? We Have Answers

How do you feel about snakes? People certainly have mixed feelings about these reptiles; some are scared and avoid any contact with them, and others admire their looks, way of motion and other characteristics. Either you are in first or in the second group of folks described, you will agree it’s a good thing we meet these interesting creatures and learn a few things about them, in the end, we are prone to be scared of something we don’t know much about.

For example, what do you think – do snakes sleep? How do snakes sleep? Have you ever seen a snake sleeping? If some of your friends have a pet snake, maybe you’ll assume they don’t sleep at all because you’ve never seen it with eyes closed. Yet, that doesn’t mean it doesn’t sleep. Snakes sleep with their eyes open.

How do snakes sleep with their eyes wide open?

So, if you see your friend’s snake staring at you persistently, don’t run away immediately; it’s probably sleeping and not plotting a plan how to get you. Snakes don’t have eyelids so when snakes’ brain decides it’s time for a nap it simply put itself in a sleeping mode. It’s true, snakes don’t have eyelids, but have spectacles – transparent scales or layers keeping snakes’ eyes out of harm and stopping them from becoming dry. And what’s interesting about the spectacles it’s that snakes shed these scales as they do the rest of their skin, which I think could be a really unusual sight to see.

So, snakes do sleep, but how long are they staying in this state? This is a hard question to answer because it depends on various species of snakes and more studies and information are needed at this point. Snakes have a circadian rhythm, and this is when they are totally active at a certain period of time.

Some species of snakes are diurnal in nature, meaning they are most active during the day, and some are totally the opposite and nocturnal, which means they mostly do their thing at night, and others are somewhere in between the two. Some snakes are more inclined to the current season, so they might switch between night or day depending what season it is right now. 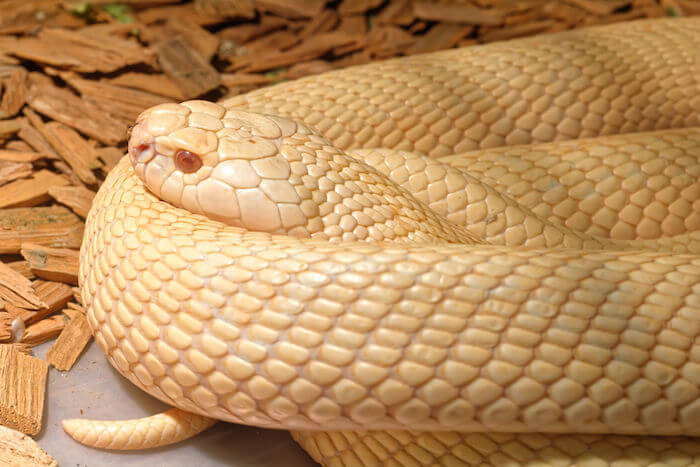 Some studies have found out that sleep in snakes comes are actually waves, they sleep at least 16 hours every day, and sometimes may increase to even 20 hours after they just ate. The said waves are in line with a slower heart rate, slow breathing patterns, muscle relaxation, and overall low behavioural response in the animal.

One more question I’ll be wondering about snakes now I know they are sleeping is – do they also dream? What do you think?!