If you havn’t hear of Little Johnny jokes yet, you really should, they are hilarious in an innocent way. Or maybe not so innocent, but just seems like it. Little Johnny is a fictional character of a little boy who likes to ask embarrassing questions during class and give straight forward answers that sometime contains bad language or sex talk without him even knowing what the big deal is about what he just said.

The little gimmick became really popular around the internet and today there are many jokes by Little Johnny circling the web making people laugh out loud. Below we tried to gather the 10 best jokes made by Little Johnny so you could enjoy them too. 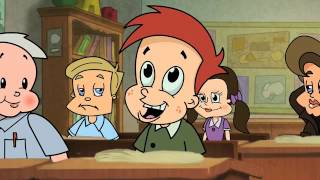 Just a normal day at school and the teacher asked little Johnny, what’s two plus two? Little Johnny opened his hand and counted 1,2,3,4 and said – 4 teacher?!. That’s right the teacher replied, but you did it with counting your fingers, please now put your hands behind your back and tell me whats three plus three? Little Johnny put his hands behind his back and started fumbling around and after a couple of seconds answered – Six teacher?!

That’s right Johnny, but you still counted your fingers behind your back, let’s try this again, but this time put your hands in your pockets and tell me what’s five plus five?

Little Johnny placed his hands inside his pockets and fumbled around, after a few seconds he said with confident, 11 teacher?! LOL

Little Johnny and Billy went on a verbal fight like many kids do, it went a little something like this:

” My father is better and stronger than your dad! ” Yelled Billy.

” My brother is better than your brother! ” Billy continued

” No he’s not! ” Little Johnny said with confidence

” My mother is better than your mother! ” Billy shouted

” Well, you got me there Billy, my dad says the same thing last week ”

One day in the kitchen during lunch, Little Johnny’s mom tried to open a bottle of ketchup and it was just too hard, so she started hitting it on the bottom to loosen it up, suddenly the phone rang, so she asked her four year old son Johnny to answer the phone. Little Johnny ran to the living room and picked up the phone: ” Mommy it’s our priest, Johnny shouted ” ” Well, tell him I will call him right back ”

4. Little Johnny learns about his past.

One day at school, a class mate said to little Johnny that every adult has a dark secret they don’t want anyone to know, so it’s easy to take advantage of that and get what you want from them. Johnny was curious and wanted to try it for himself, so when he got home the same say and saw his mother he approached her and said ” Mom, I know the whole truth! ” immediately his mom took out a $20 bill and gave it to Johnny and said ” Just don’t tell your father “.

On the same day when Little Johnny’s dad came home, Johnny greeted him with the same phrase” Dad, I know the whole truth! ” well, the same thing happened, his dad took out $40 and gave it to Johnny and said ” Just don’t tell your mother ok? ”

Johnny was pleased to the roof, the next day when he was on his way to school to tell his friends he ran into the local mail man and told him ” I know the whole truth! ” The mail man dropped his bags and said ” Well, come give your dad a hug! “

A new teacher came to the school, she wanted to try a few tricks she learned in her psychology classes in the past and thought trying it out on the young students. So when she got to class, she asked the kids ” Everyone who thinks they’re stupid, please stand up”

After a few seconds of thinking about it, Little Johnny got up from his seat and the teacher said ” Do you think you’re stupid Johnny? ”

And Johnny replied: ” No ma’am, but I hate seeing you standing there by yourself ”

Johnny was walking up a hill one day with friends and carried his little red weapon with him, it was very heavy to pull it on to the hill top and half way through Johnny started saying ” Fu** this and Fuc* that!”

Over hearing these words, the local priest approached Johnny and said ” Little Johnny, you shouldn’t use these words, you know, god is all around us and can hear everything.”

” Is god in these trees here ” Johnny asked again

” Yes Johnny, he is ” The priest replied.

” Well, is god in this weapon I’m carrying? ” Johnny asked.

” Yes, he is, the priest replied once more.

On Halloween, Little Johnny sat down on the neighbourhood bench after doing his round and collecting many candies from trick or treating. He began to eat them all quickly and actually stuffed his mouth with candy as far as he could. Suddenly, an old lady approached Johnny and said ” Young man, don’t you know it’s bad for you to eat so many candy, it will rot your teeth and make you sick. ”

Little Johnny than replied ” Well, my grandfather lived to be a 105 years old ” said Johnny.

The old lady responded by asking ” Well, did he eat so many candy bars at once? ” She asked

” No. but he minded his own goddamn business! ”

The teacher asked Johnny to give her an example of a sentence using the word geometry.

Little Johnny replied ” A little acorn grew and grew until it finally awoke one day and said, ‘Gee, I’m a tree.'”

9. Little Johnny being a smart ass with the teacher

The teacher asked Little Johnny to give her a sentence using the words ” defeat, deduct, defense and detail ”

Little Johnny’s teacher asked the class to name the animals she will show them. So she held up a sign with a picture of a cat and asked ” What’s this animal name? ” The class answered with a roaring ” a cat! ” – ” That’s right everyone ” said the teacher.

Here’s a mix of Johnny jokes:

If you enjoyed these jokes, you’re gonna love these 41 Knock Knock Jokes