Why do tigers have stripes? You might ask yourself every time you see the beautiful animal. Well, we learned that researches have actually tried to figure this question out for many years until reaching the most obvious explanation. The stripes on a tiger is to camouflage it with its surrounding so it could hide from prey, making it easier to hunt and protect itself.

Tigers are natural born hunters, they pretty much hunt all the time in order to have sufficient food and meat to survive. It’s due to the fact they are such big animals, they need lots of meat to stay healthy. Everything the tiger does, its to help him hunt and get his meat on, so the stripes is not really surprising when you think about it.

How tigers use their stripes to hunt

Tigers hunt their prey by sneaking up on it, while they are big animals that you would expect to make a lot of noise running and walking, they can actually sneak pretty good. They hunt by crawling or curling up into a ball and just wait for a prey to come by, the stripes on their fur really help in these situations as they are blended with their environment and seem like just another rock or plant to other animals which don’t really know how to see different colors as well as humans.

When the moment is just right, the tiger will bounce on its prey, using his sheer power and speed to catch it and kill it as fast as possible. The tigers are excellent hunters and usually if a prey is within 30 feet of the tiger, it is doomed.

Why tiger stripes are orange and black 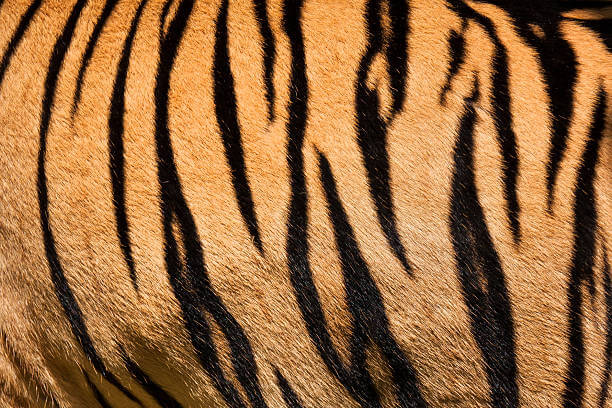 So after figuring out why do tigers have stripes, we want to know why they are in the orange and black color. Well, it has been said that these colors blend well in many surroundings, the orange can blend with dirt colors such a brown and orange, and the black breaks the orange color if the tiger is in an area where there are more trees and the orange will stick out, so the black stripes cancel this out and gives the tiger enough camouflage to not be noticed so easily.

Most animals in the wild do not see colors the same way as humans do, so while you look at a tiger and think it’s easy to spot, an animal will usually have a hard time noticing it unless it’s right in its face. Animals see solid colors better, so the stripes of the tiger actually help by confusing the animals and making them think they are looking at something naturally like a plant or a rock and not an animal trying to sneak up on them.

Like we mentioned before, most animals who face against a tiger, will lose. And the awesome jumping ability plus pure strength and speed, and with a great camouflage, makes the tiger one of the best hunters in the wild.