Puns are the worst. Seriously, they’re so annoying. Why can they even be considered jokes? They’re the lowest form of comedy but they seem to be getting popular on the internet lately. Anytime I hear someone make a pun and it isn’t an accident, it makes me cringe. But I use them from time to time too, only to annoy people. Maybe that’s why most people do it. They know how annoying it is and they just love to watch people squirm.

Alison, also known as frenums on Tumblr, is one of those people who seems to love puns. She’s created a really extensive, really annoying and kind of hilarious collection of Skeleton puns comics. It’s no surprise that these would be popular on Tumblr. The hilarious thing about these comics is that you don’t just get the puns. You get the skeleton making a stupid pun and then another skeleton being so fed up with the other skeletons crap. You get both sides of the joke.

Take a look at her skeleton puns comic and leave your thoughts and annoying puns in the comments section.

1. The first in many hilarious skeleton puns by Alison 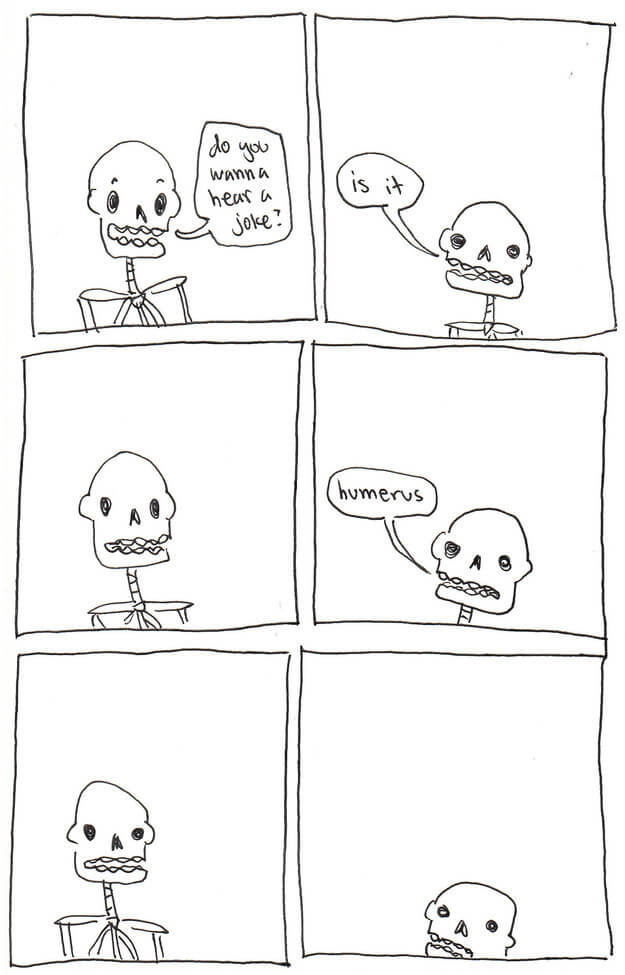 2. What do skeletons order at restaurants? 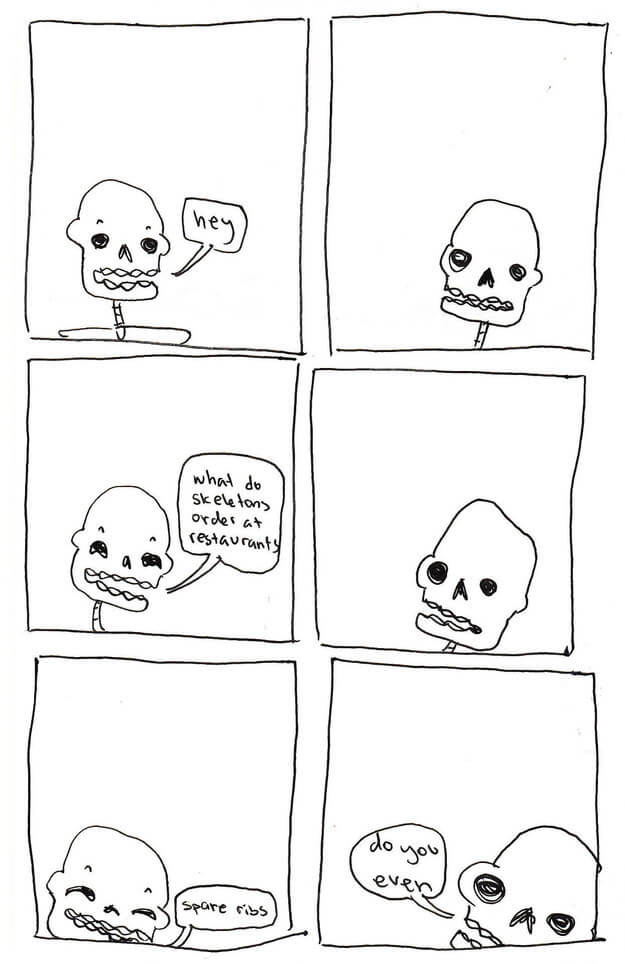 3. What is a skeleton’s favorite instrument? 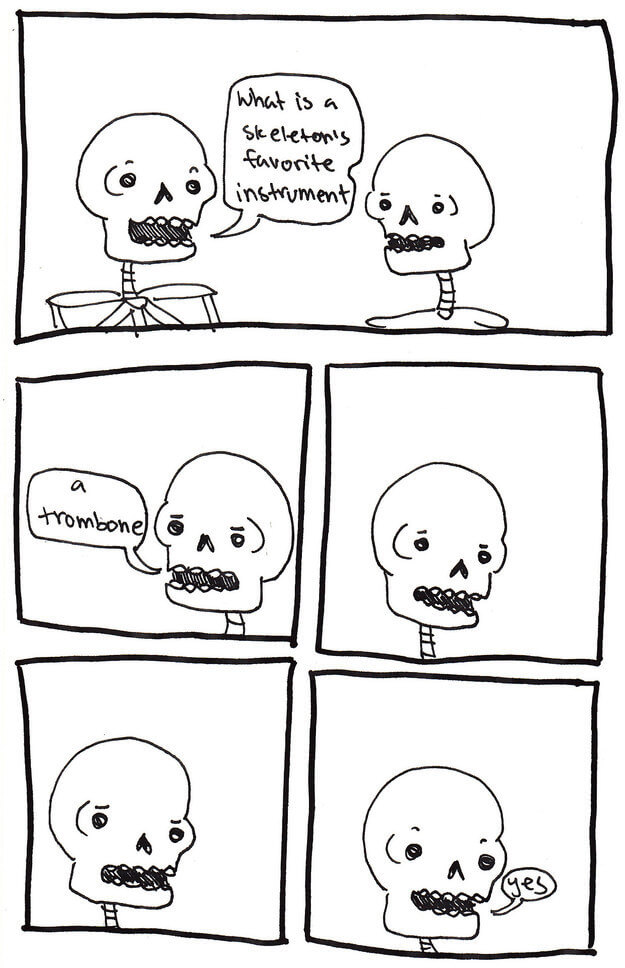 4. This is a different type of pun, only with the text.

Q: Why didn’t the skeleton dance at the Halloween party?
A: He had no body to dance with! 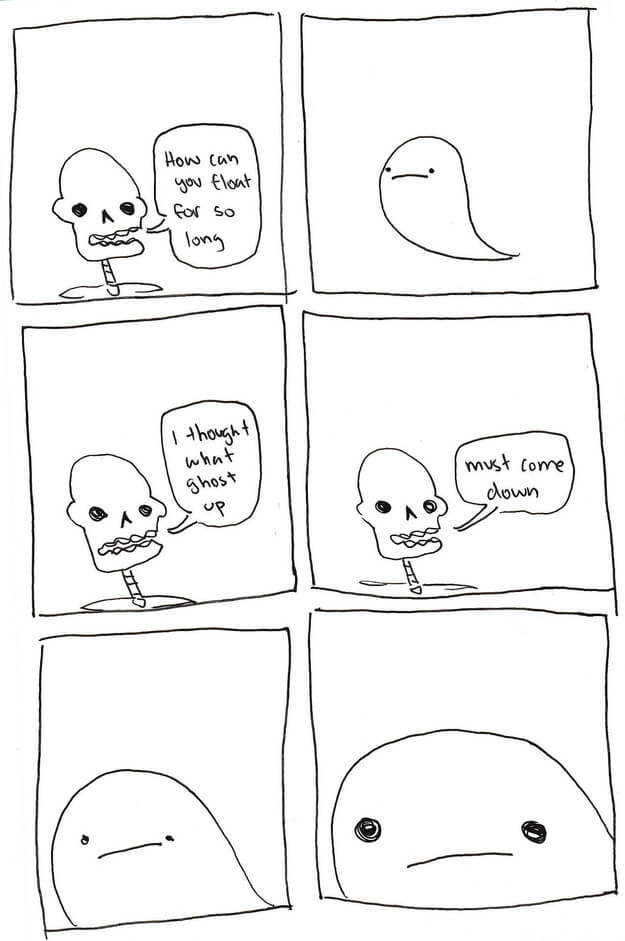 6. You want to know why skeletons are so calm? 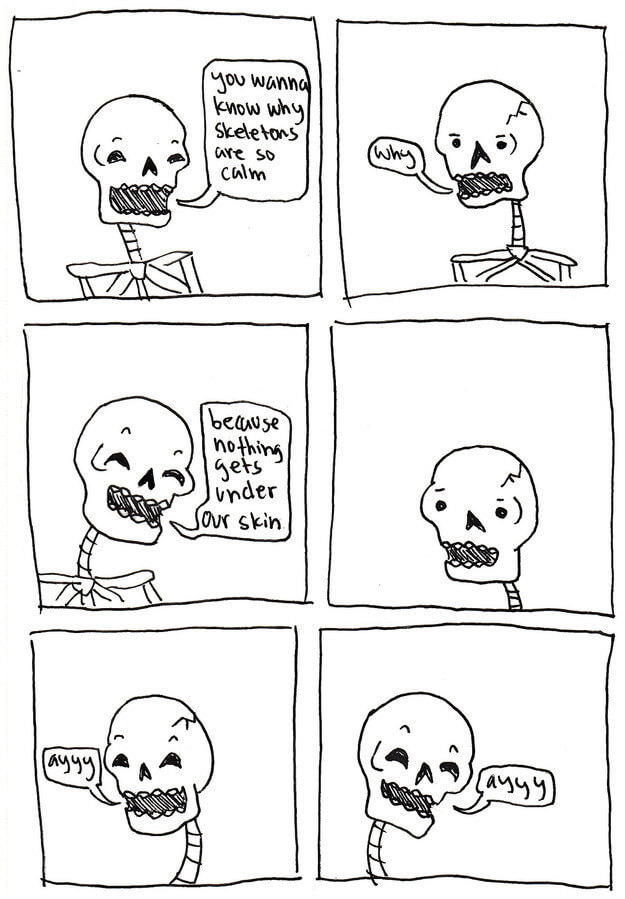 7. I see right through you man 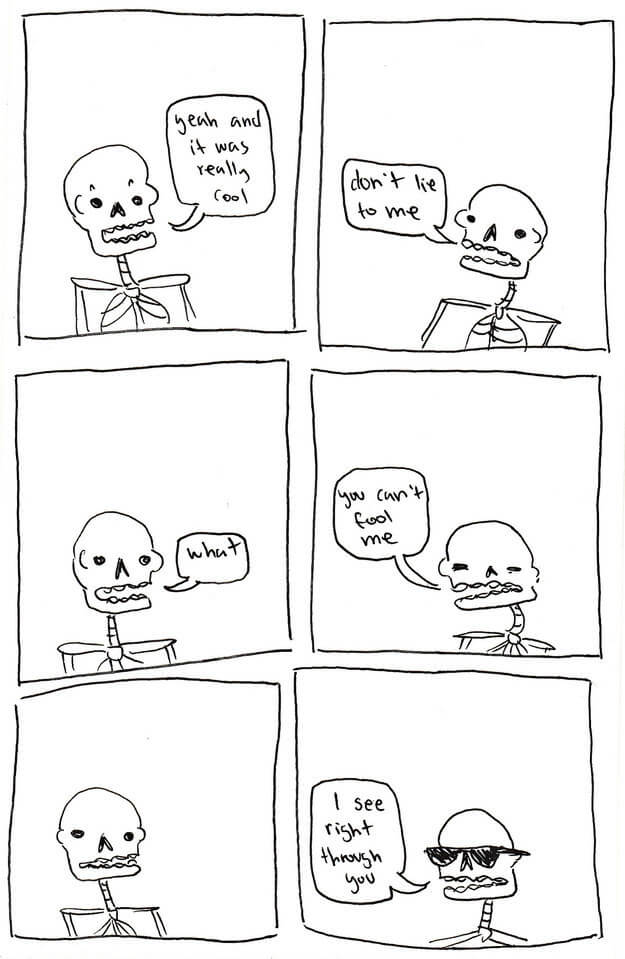 8. Here is a short video full of skeleton puns:

9. Why are graveyards so noisy? 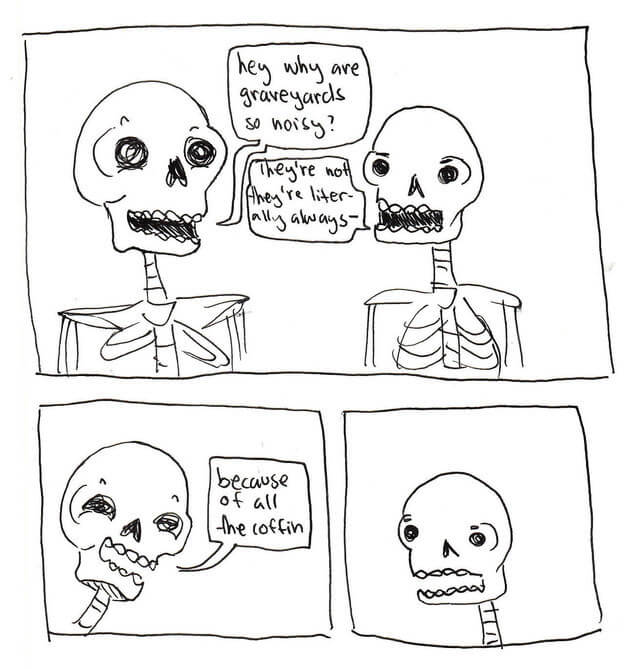 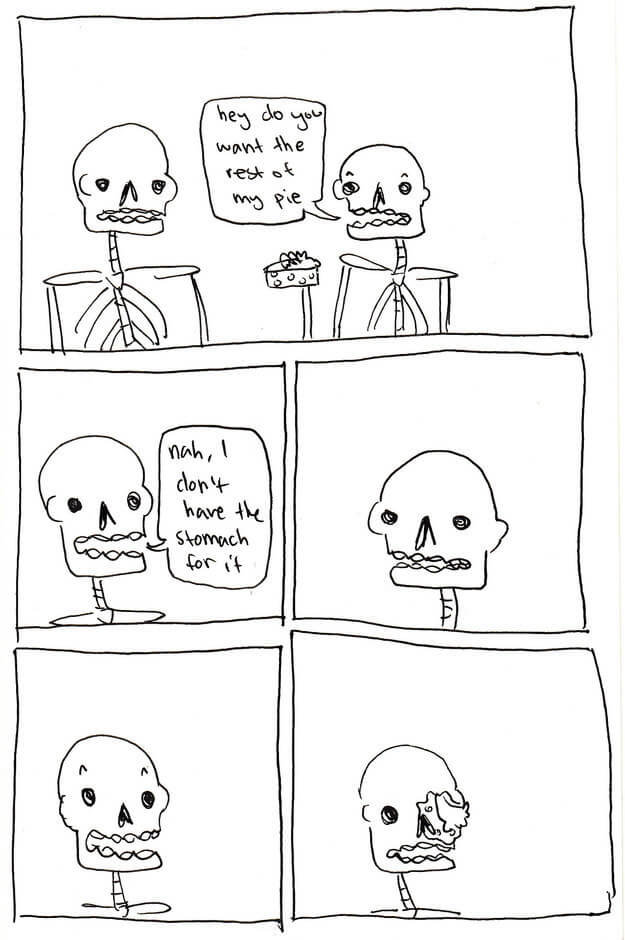 11. You know what they call a dumb skeleton? 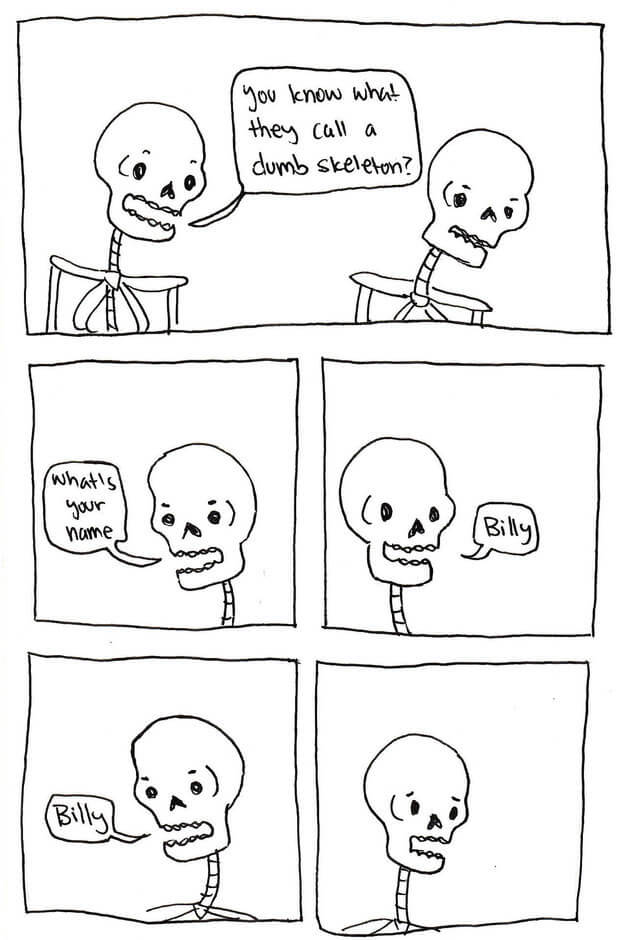 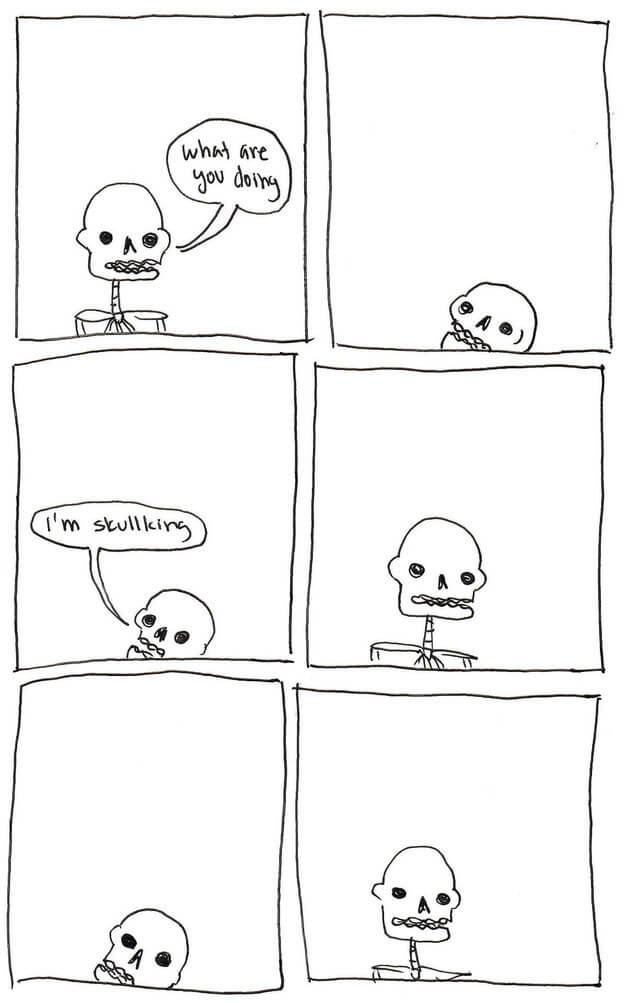 13. The wind goes right through you 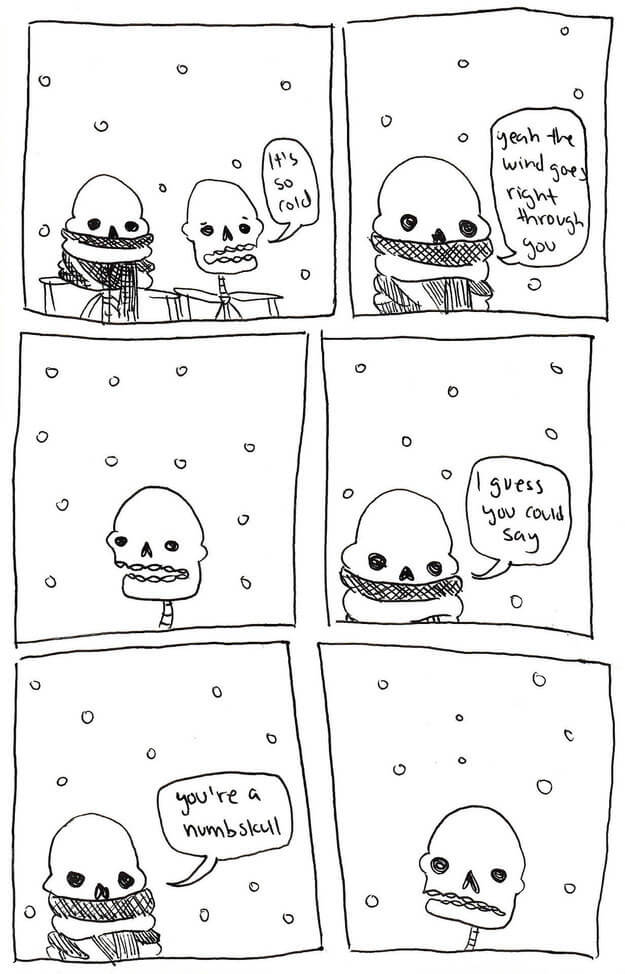 14. Why being a vampire really sucks? 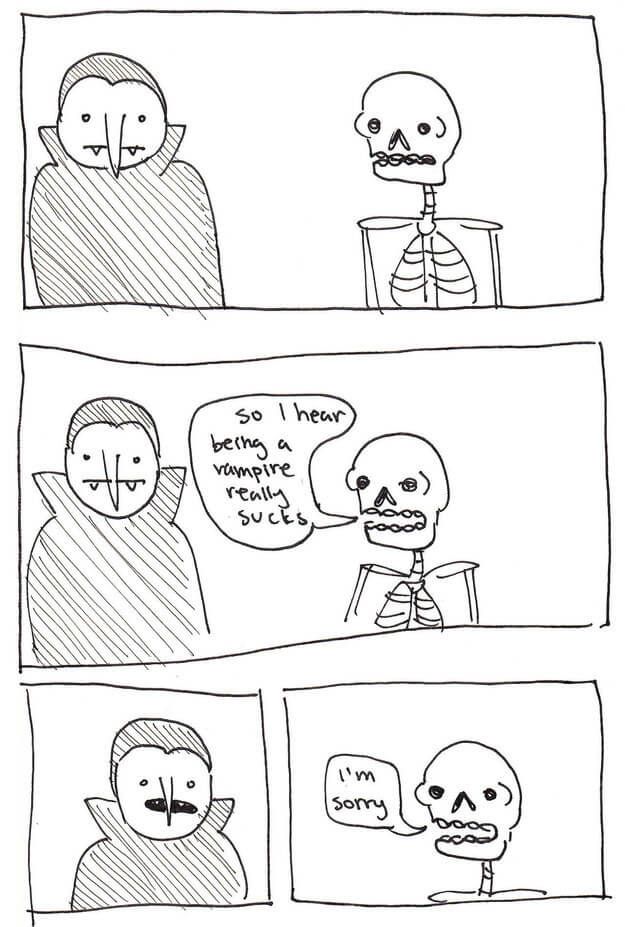 Q: What did the skeleton say when his brother told a lie?
A: You can’t fool me, I can see right through you.

16. Vampire looking for his neckst victim 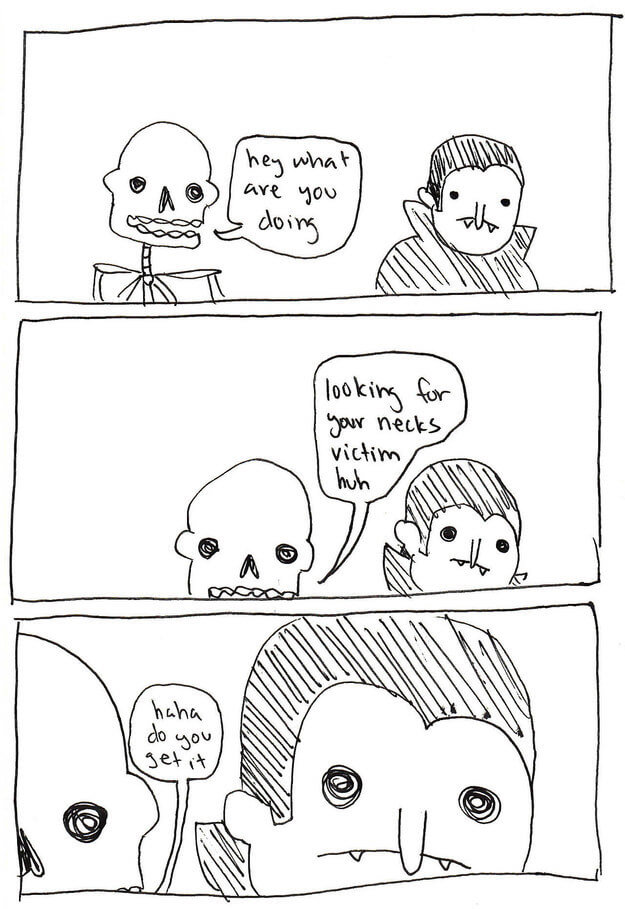 17. This garlic bread is so good dude do you want some? 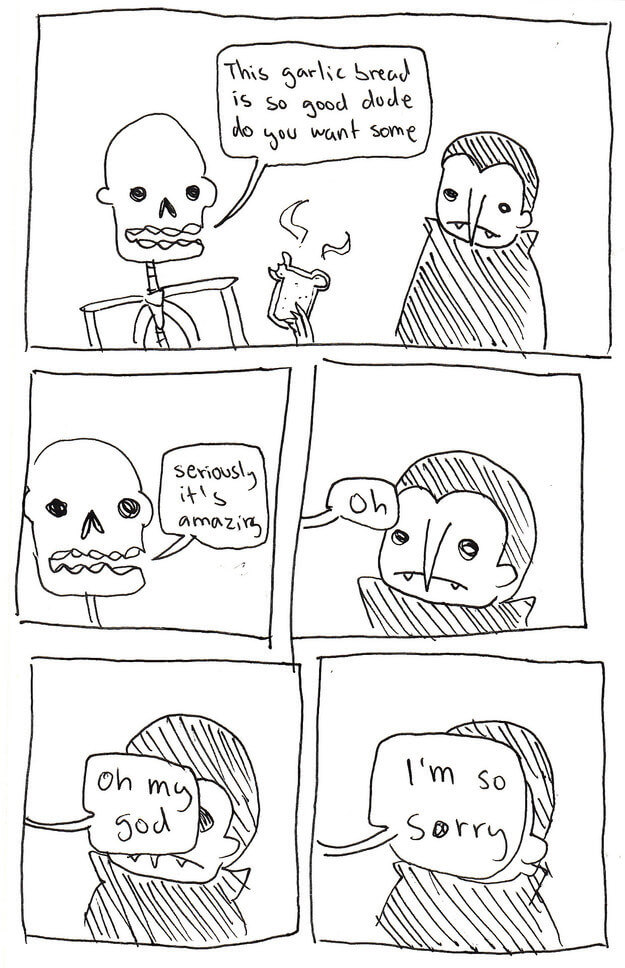 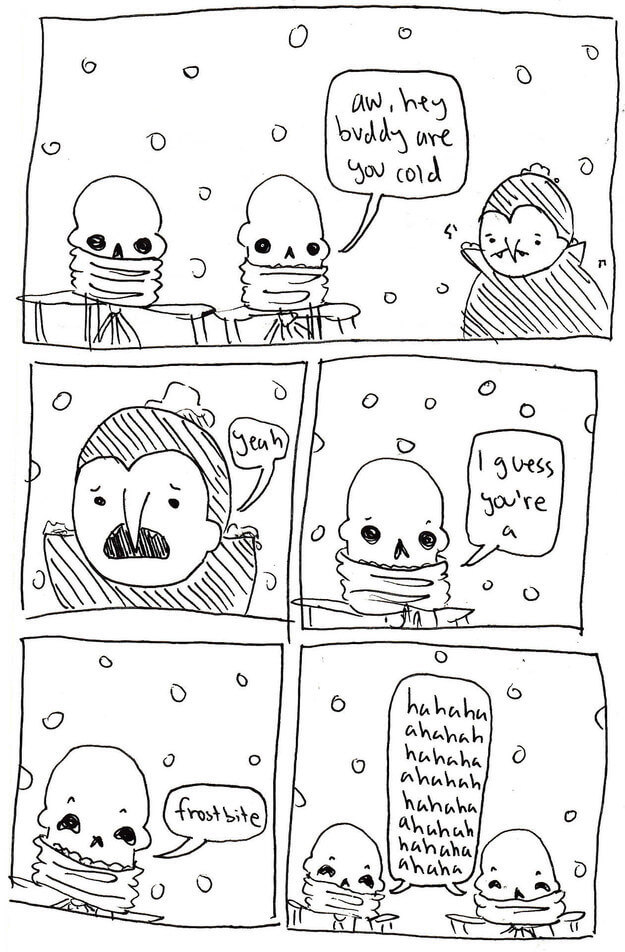 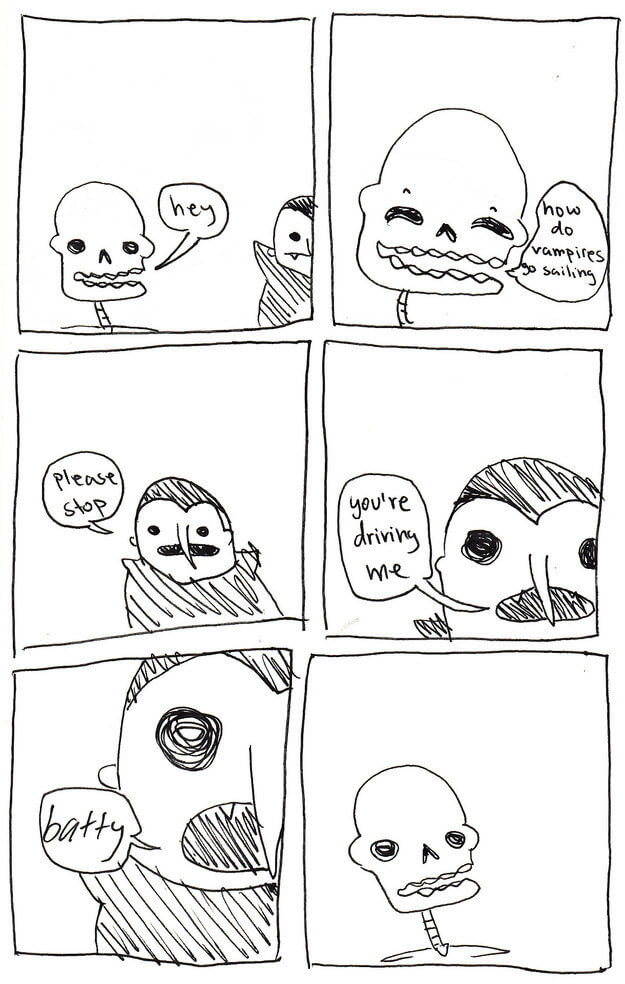 20. Remember that time when you died and i took your soul? 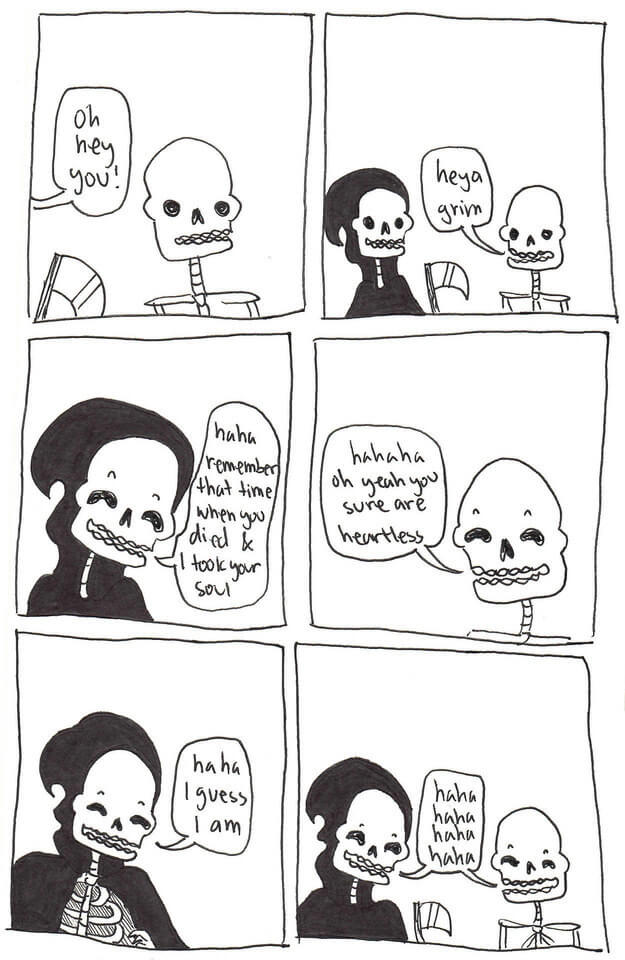 21. And the winner of this year’s skeleton beauty is? 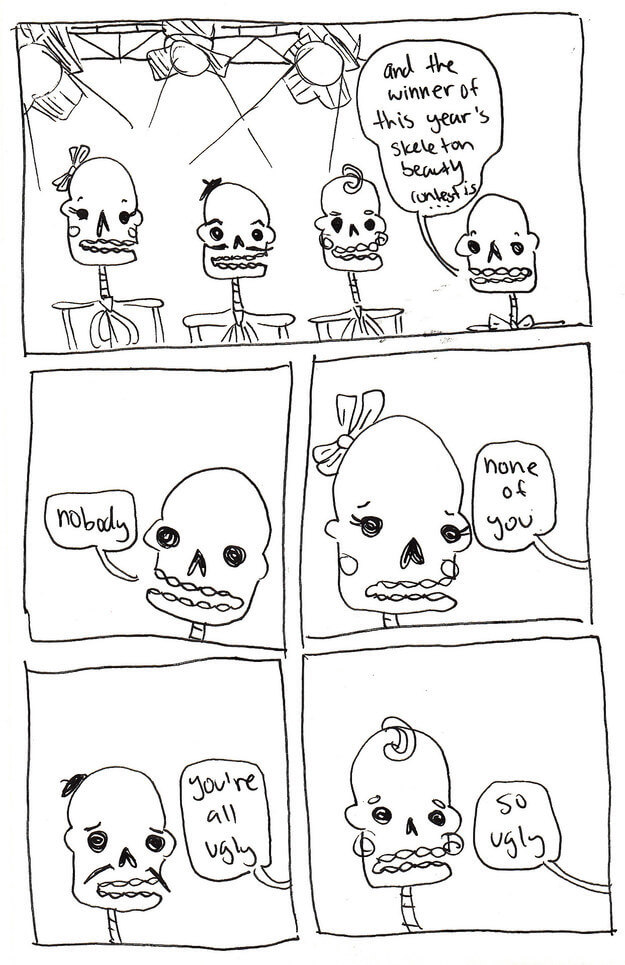 22. Did you know this fact about the human body? 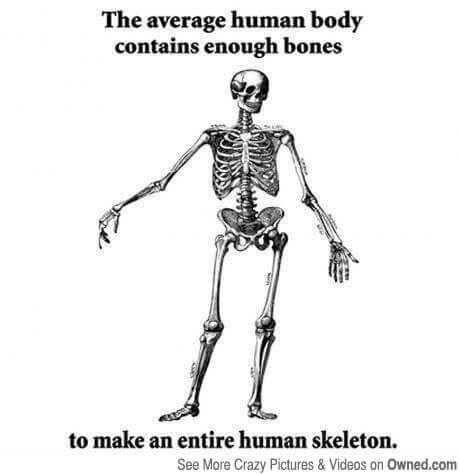 23. Why are you feeling a little down buddy? 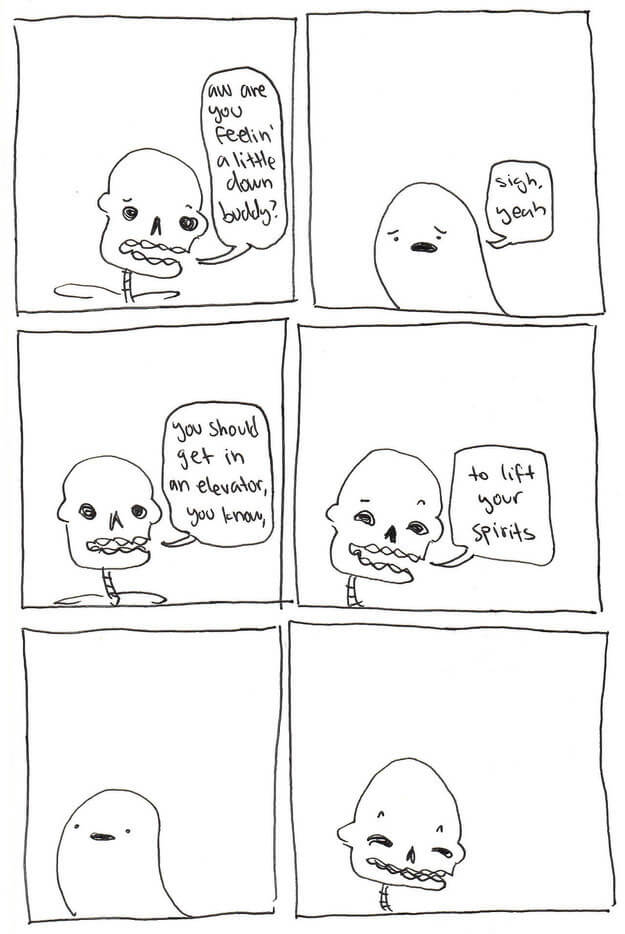 24. Dracula is actually such a pain in the neck. 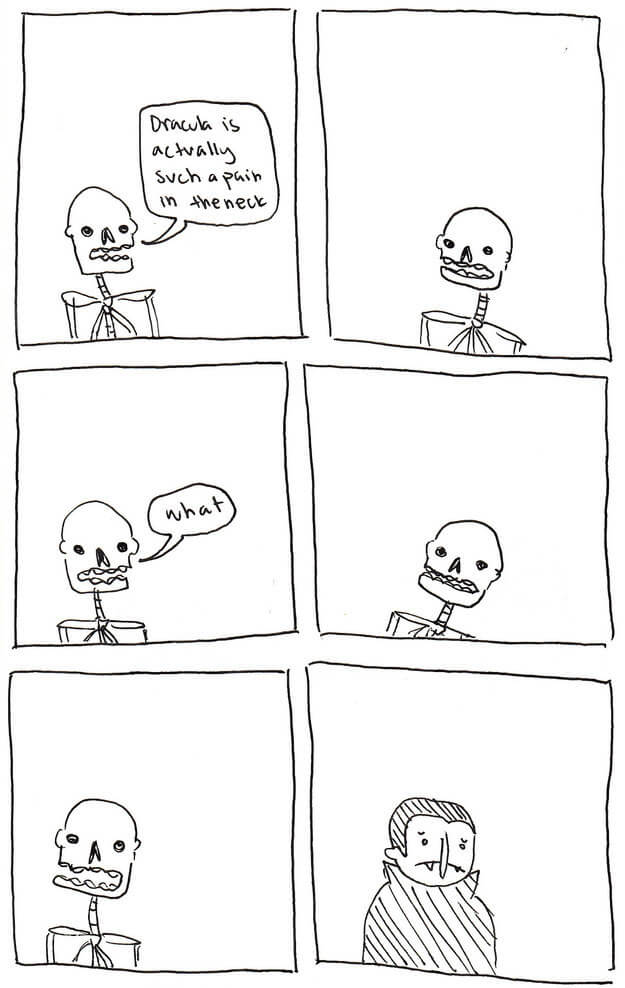 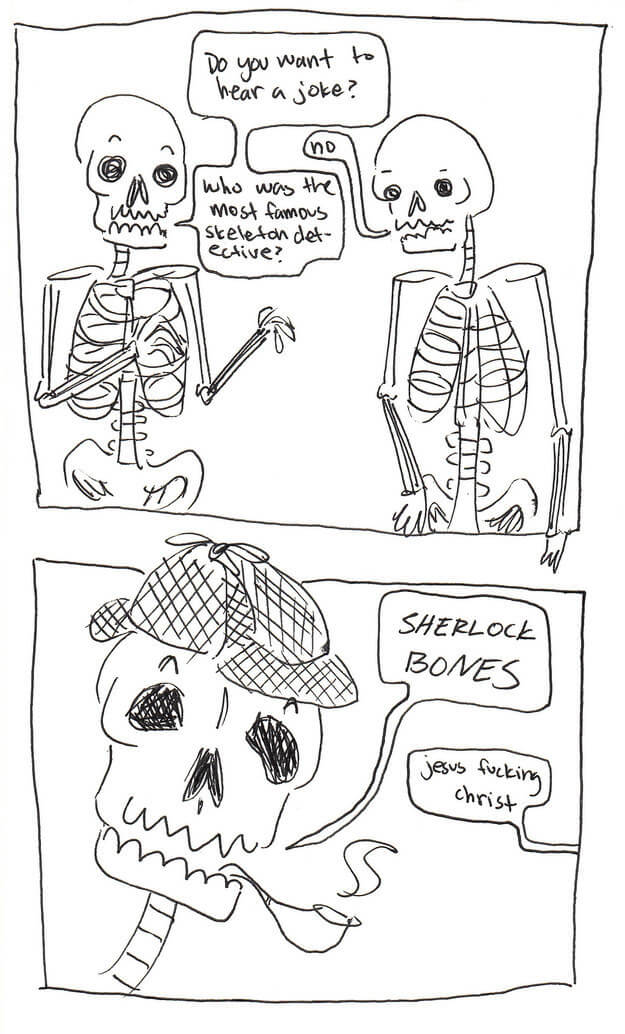