Why Do Dogs Pee On Fire Hydrants? Hint, It Just Seems Like They Do

Why do dogs pee on fire hydrants? Walking your dog is a good opportunity to become aware of his behaviour. You’re just walking by him and letting him do his thing, but you couldn’t help but notice that he prefers certain places for peeing, especially water hydrants.

Walking your dog you’ve probably become aware of his behaviour. You’ve probably been a little angry at times when the closest tree or water hydrant was not enough for him to pee. Why do dogs do that? Why are they running away back and forth and peeing a little bit on every thing they find in their way? Well, the answer is here. Or at least, part of the answer.

Dogs depend a lot on their sense of smell and they highly function on marking their territory and that’s in their genes, even though they don’t need to mark their territory anymore now as they are taken care of by their loving owners, they still have the urge to leave their scent on objects so that other animals would know they have been there.

Why do dogs pee on fire hydrants and not something else? 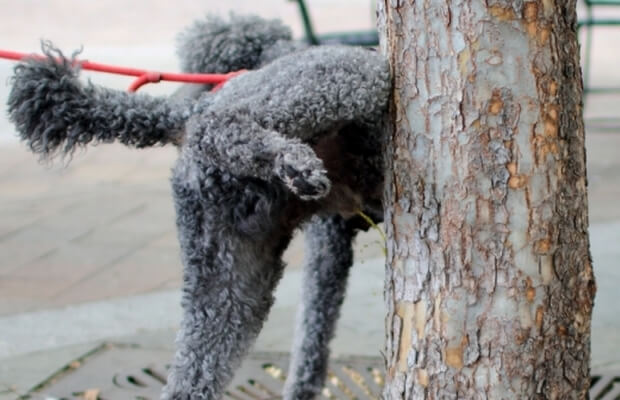 So, dogs don’t just pee on fire hydrants. In fact, they will pretty much pee on anything that is standing and able to take their pee. If you really think about it, dogs pee on bushes, trees, walls and even cars many times. Whenever you walk your dog, he will always be sniffing around and pee on a hydrant or tree where he feels that a female dog in heat has been or they simply do it to erase the former scent of another dog and replace it with their own.

So dogs don’t pee only on fire hydrants?

NO! We just said that. Good, so dogs pee on a lot of stuff because they mark their territory and they erase the smell of another dog, just to prove that they’re stronger, but why do they prefer fire hydrants that much? Well, it seems it’s got to do with the paint in them.

Veterinarians think that there is something “sweet” in their paint that replicate canine urine in a way. This wasn’t something planned, no official ever thought about using paint that smell sweet to the dogs, it just happened. And yet this is not something that is scientifically proven, it’s just how many people think, but clearly it’s no fact.

So, next time you walk your dog and wonder why dogs like to pee on fire hydrants, don’t blame him for rushing from one fire hydrant to another to pee. They’re not only peeing, they’re doing much more than that! Let them feel good about themselves.

What are other things that dogs pee on?

Dogs urinate on trees, car wheels, telephone poles, pretty much anything they sense another dog has peed on to erase their smell, or, just to mark their territory. Fire hydrants are their favourite. We’re not really sure it is because of something in their paint or just because they’re some really nice upright items available for every other dog to pee on. And, if one dog has peed on one hydrant, others are sure to follow. And hydrants have become some iconic dog icons .Pet shops are filled with pet items shaped as fire hydrants. For example, you can buy a plastic fire hydrant to hold the dog’s food or toys. You can also buy a plush toy shaped as a fire hydrant or pillows with this design.  Fire hydrants are part of the popular dogs’ tradition.

While in the wild, dogs also pee on rock, trees or any other vertical object to let everybody know that that’s they’re territory. So, there’s not much you can do to stop a dog’s love story for the fire hydrant and any upright vertical object they can use as a marking of their territory. What do dogs pee on fire hydrants? We can sum it up in 5 simple words: “Nature made them do it”. And while there might be some human touch in there (painting the fire hydrants with a type of paint that attracts our canine friends), we are not responsible for this behaviour. Still, it won’t do much harm, so let your dog have fun peeing on a fire hydrant from time to time!

21 Pictures That Make You Go Hmmm. What More Do You Want?

26 Of The Most Beautiful Roads In The World

26 Of The Most Beautiful Roads In The World