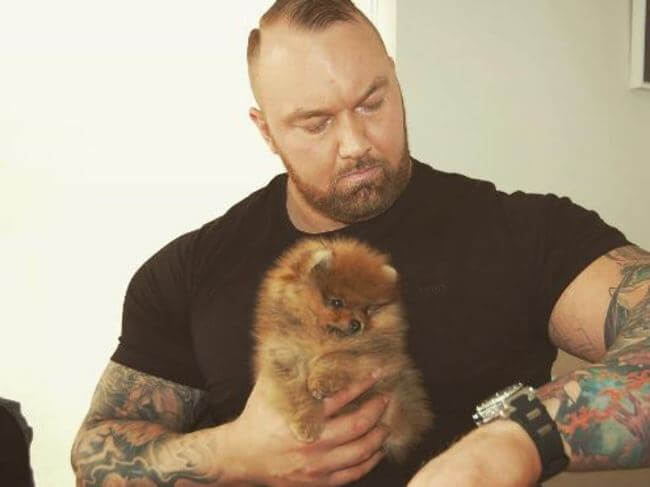 Definitely, there’s something about big guys and small dogs that make you go aww when you see them hanging together. A gentle side of someone with dimensions of a mountain is a hidden game which we admire when we finally spot it.

SEE ALSO: Game Of Thrones Cast – Then And Now

That’s the case with the dude actually called The Mountain after a character he plays in the Games of Thrones series because it is easily pronounced than his real Icelandic name Hafþór Júlíus Björnsson. Recently he’s got a new pet –  the tiny Pomeranian puppy which is about the size of his fist.

The Mountain uploaded pictures of two of them playing and training together on his Instagram account and you shouldn’t worry about the pup because this giant is taking  good care of him according to the photos. On the other hand, the pup is helping him in his cardio training for which he obviously needs an extra motivation.

In a matter of fact, Asterix (the name of the little Pomeranian) looks very happy with his owner who opened a separate account on Instagram just for him where you can see his everyday activities such as bragging with new toys. Check out the photos from both accounts below, they sure are adorable.

34 Snacks And Candy We All Loved From The 90s

34 Snacks And Candy We All Loved From The 90s