If you want a good night sleep , lets just assume all of these are fake

1 : My 3 year old daughter stood next to her new born brother and looked at him for a while then turned and looked at me and said , ” Daddy it’s a monster..we should bury it ” 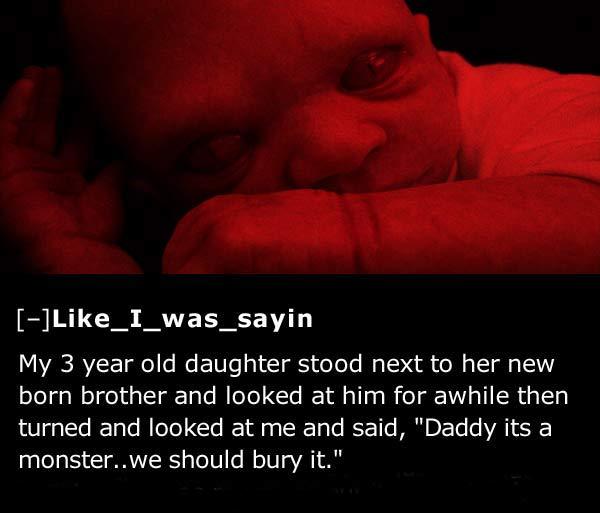 2 : When my son was about 4 or 5 we were in the toilet before his bedtime and he was brushing his teeth and he dropped his tooth brush and i picked it up for him and when my eyes met him he just stared at me and said ” dad why does that man have a knife ” and pointed behind me. Quickest 180 I’ve ever done 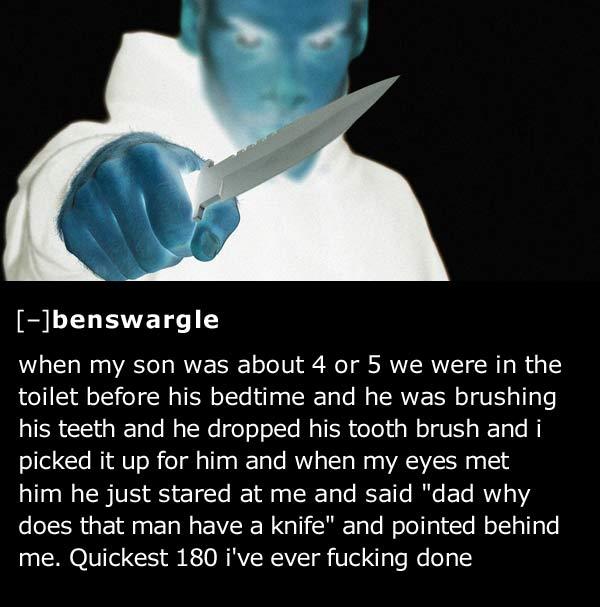 3 : When my youngest daughter was three i went into her room at bedtime to tuck her in , I walked up to her bed and noticed that the floor was wet. I asked her why the floor was wet and she told me ” I was spitting at the fog people . It makes them go away ” She did this numerous times , scared the hell out of me 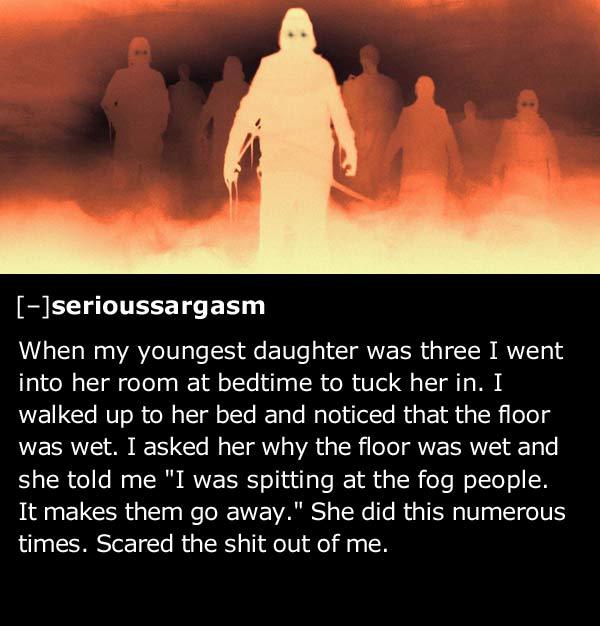 4 : When my daughter was three , one day she said to me , ” Don’t you remember , mommy ? before, when you were the daughter and i was the mother , they came and chopped all our heads off. Chop , chop , chop , chop , chop ! The whole village ” She made vicious chopping motions every time she said the word , chop . I was so taken aback all i could think of to say was ” Fortunately sweetheart , I don’t remember the head chopping .” Her response was , ” well it happened and i remember it really well “ 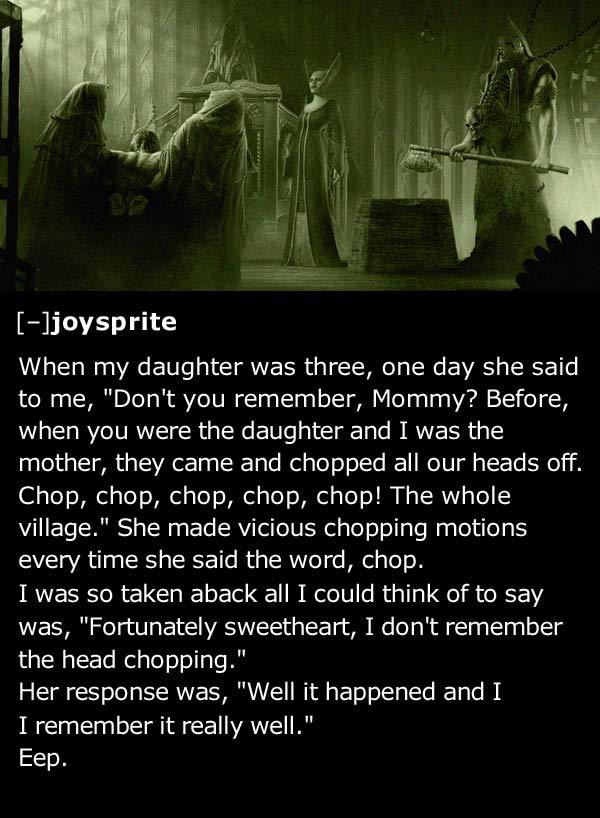 5 : I was heading to the bathroom on the second floor of my aunt’s house when i saw my cousin , April , on the stairs . April was four and very animated . She was busy making funny faces while sitting on the stairs . I asked her what she was doing . She said  ” i’m copying the lady with the braid ” I looked around , there was no one else but us . I asked  ” where is the lady , April ? ” She pointed to a beam running parallel to the stairwell . I asked April ” what is the lady doing ? ” She said , ” makin’ funny faces ” I smiled and started walking up the stairs again when April said something that stopped me in my tracks. April ” her braids is around her neck  ” i turned back and asked April to repeat herself . April pointed ” the lady is hanging by her braid… she’s making funny faces ” Then April started making a face which i then realize was it someone gasping for air 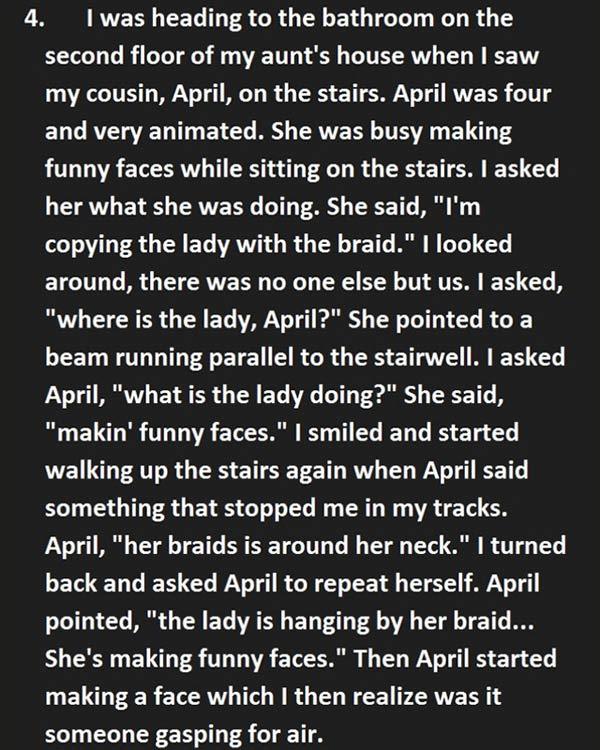 6 : One night i was babysitting my friend’s children . The youngest , about five years old drew a picture of a woman hanging from the ceiling , looked up at me and said ” she told me to drew this. She’s coming for you , Hide 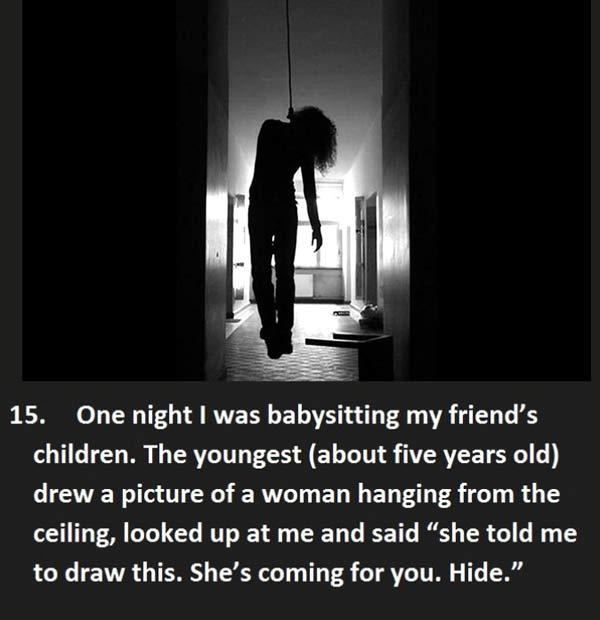 7 : Looking after my little cousin in Montana one night , and he started telling me about the ” Creeper man ” who lives in his mom and dad’s bedroom . He brings it up after he visits them . I made the mistake once of asking what he looks like . He said ” Oh , he doesn’t have a face ” 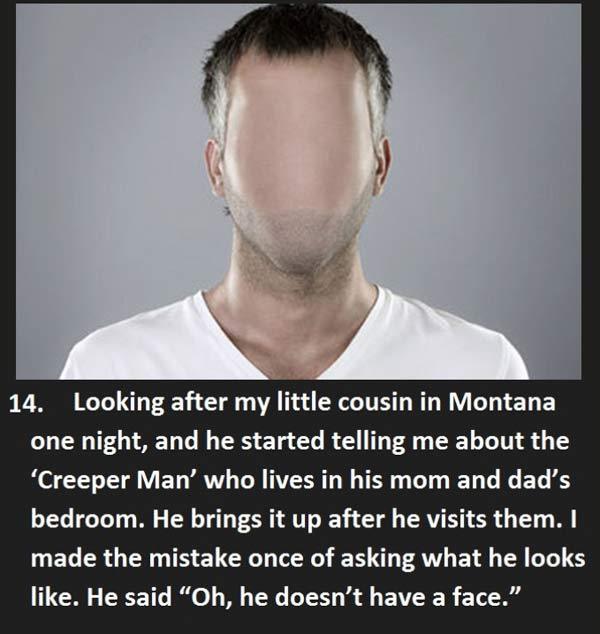 8 : My daughter said to me that there is a woman who watches her watch movies in her room and sleeps on the ceiling above her bed when sleeps. She also says it does not like me and wants to eat my heart. my kid watches Elmo and dinosaur train , where in the hell did she get this from ? 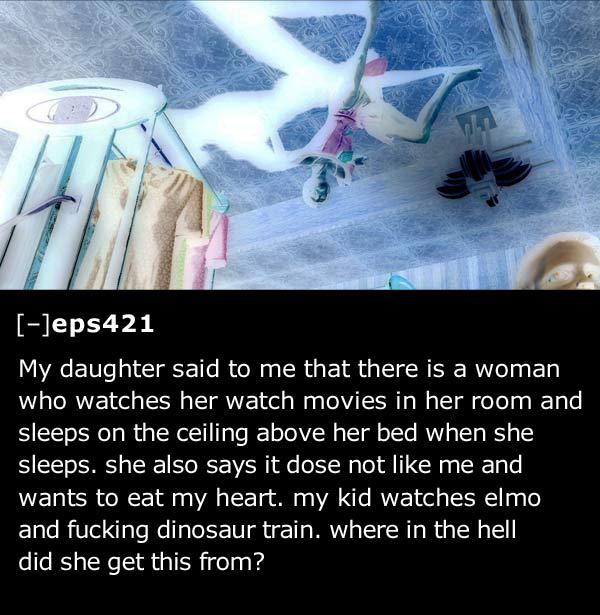 9 : When my son was three , he came and climbed into bed with us , crying . I asked what was wrong , he said that the big fat man with a bloody hole in his head kept trying to open his window 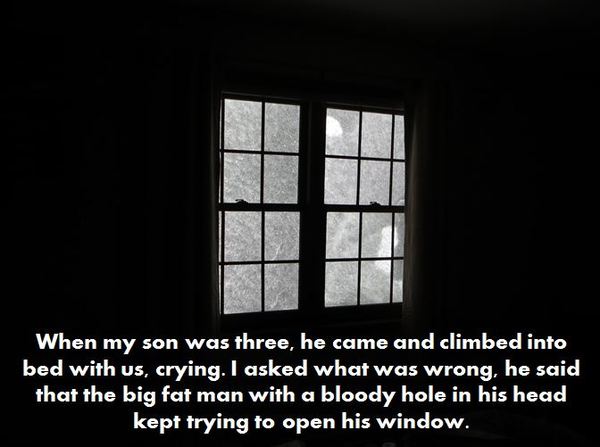 10 : My brother grew up being terrified of water, I’m 4 years older than him and during the nightly battle for bath-time when he was about 3 or 4 i asked him why is he so scared of the water . he looked at me and i remember this word for word  ” i was in a big unsinkable ship , we hit the biggest iceberg and then it was really busy and then i got really cold and wet i went to a warm bright place and waited until my next family came’ my mum heard it all and decided bath-time was over . Creepy thing is my brother was born April 15th 1992 , the Titanic sunk April 15th 1912 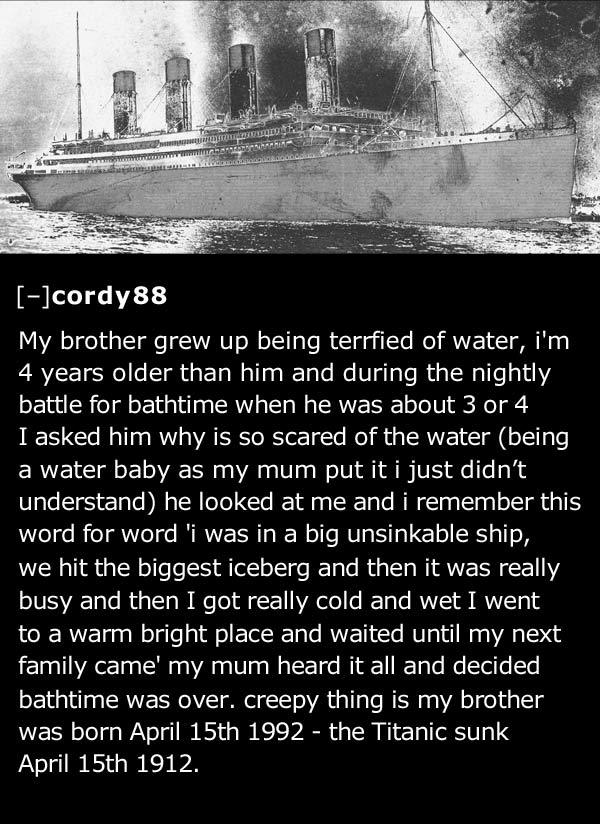 11 : I wake up to find my three year old standing by the bed staring at me inches from me with a huge grin on his face. he just stares and grins…” What are you doing ? ” I finally say . ” Nothing ” still grinning , at this point i realize he’s got his hands behind his back . ” Are you holding something ? ” ” No ” I look anyway , he’s hiding our largest carving knife behind his back 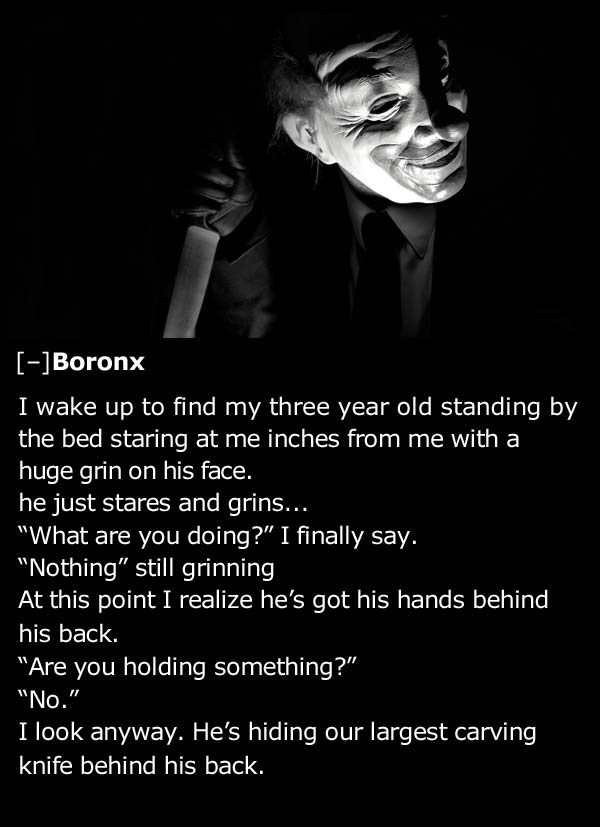 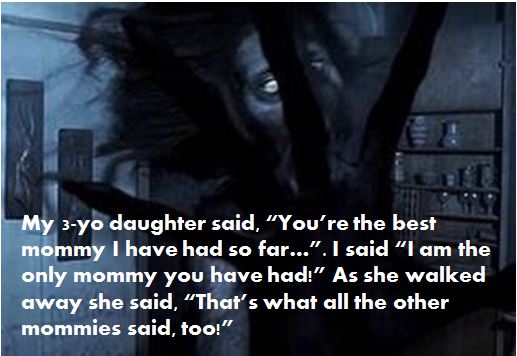 13 : Two years ago i was looking through my elementary school year book with my 5 year old cousin , when we were at a page with a 2nd grade class, she pointed to a boy’s photo and said ” that looks just like Nicolas ” when i asked who Nicolas was she just said ” The boy in my closet ” and kept on looking though the pictures , i almost died 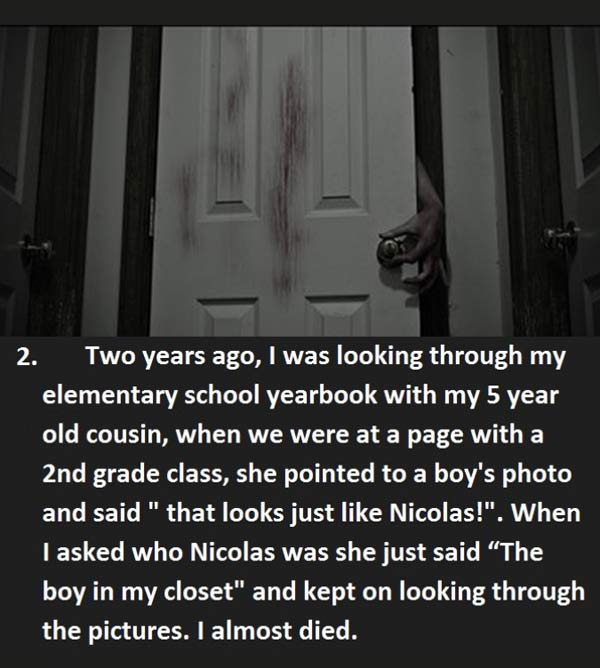 14 : A few years ago i was putting my friends daughter to bed fir the night , she was about 2 at the time , and she was fighting going to sleep . She asked me why she had to go to bed , and i said ” Because it is late and it’s time for little girls to get a good night’s rest ” she then pointed at nothing across the room and said ” Why about that little girl ? ” 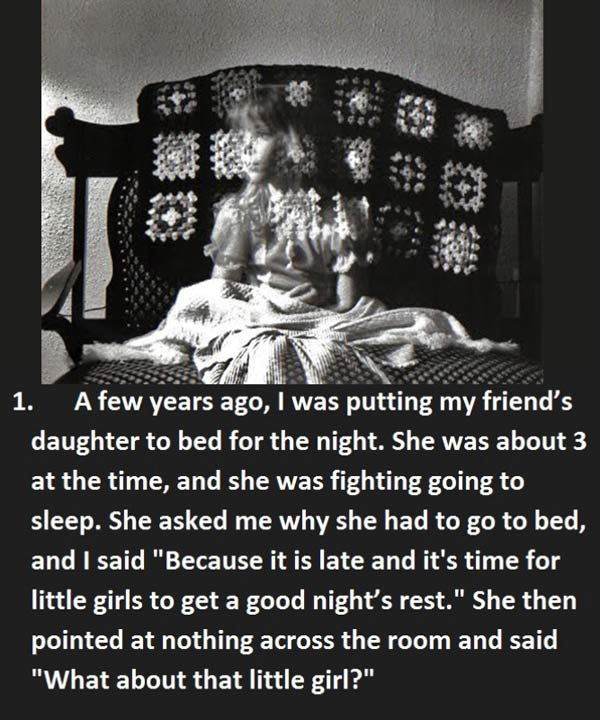 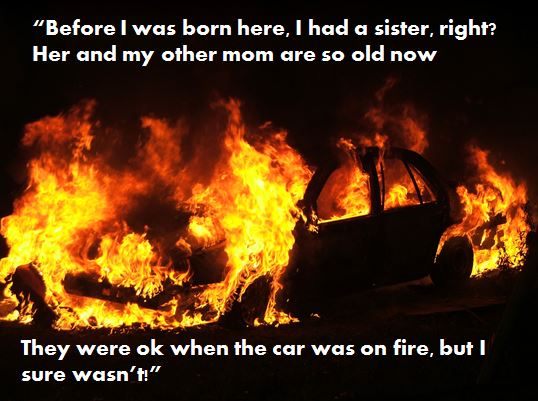 16 : When my oldest son was 2 he pointed to our guest bathroom and asked ” Why is the little girl in the bath tub sad ? ” 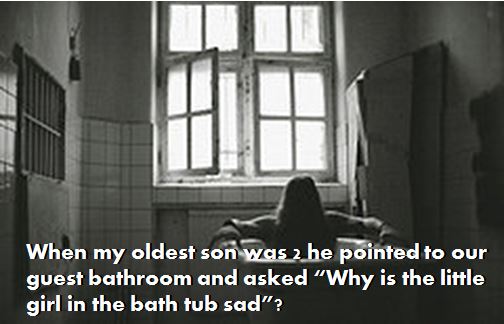 Oh lord , i’mma have a heart attack! oh this is some scary stuff