Is there someone in the world who doesn’t like surprises?! Okay, probably there is, and probably it’s a Grumpy cat. But for most of us, ever since we were kids who got thrilled by gift hidden inside a Kinder Surprise, surprises are welcome and can bring our mood quickly on the highest level.

The development team from Google knows this fact and hides a surprise or fun little treats called Easter eggs in almost all of the company’s products and services. Here is the list of 10 Google Hangouts Easter Eggs that are hidden in the popular Google product. Use these tricks to start the fun!

Type “LMAO!!” (with the two exclamation marks at the end) into Google Hangouts and look what will pop up right in your chat box.

2.  /PONYSTREAM – the weirdest feature on the google hangouts easter eggs there is

Type “/ponystream” (with the forward slash at the beginning) into Google Hangouts and you’ll get a stream of My Little Ponies going endlessly from side to side of your chat box. Not sure when to use it… when you’re bored, probably.

Type in “/ponies”—only a single pony will appear instead of a stream.

Type “/shydino” into Google Hangouts and a small green dinosaur will slide on the screen and hide behind a small yellow house. A shy dinosaur makes cute emoji and cool Easter egg on this list of 10 google hangouts easter eggs

Type “woot!!” into Google Hangouts and don’t forget two or more exclamation point and animation will pop up to emphasise your excitement. This also works with “Woohoo!!” or “Yay!!”.

Type “Happy Birthday!!” into Google Hangouts and popping up duck will send the wishes for you.

Type in “/bikeshed” until you get a color of chat box background you like. It changes randomly, 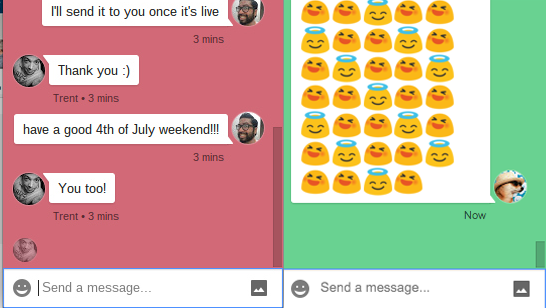 If you type “/pitchforks” into Google Hangouts, villagers with fire and pitchforks will run back and forth across your chat window. Get him! I almost hear the crowd yelling.

Google programmers love the Konami Code, which originally appeared in old school video games like Contra and Castlevania. If you type this in the chatbox your background will change magically from white to green hills and trees. 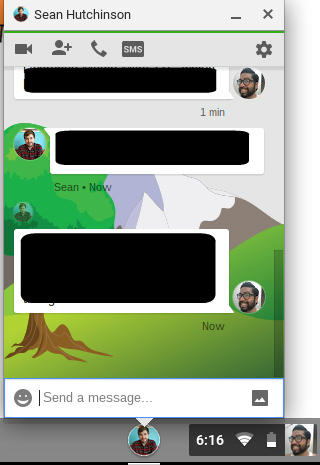