In 1990 Fans Broke Into Keanu Reeves Property And Instead of Calling The Cops, He Invites Them in For a Beer

So by now we all know that Keanu reeves is the nicest celebrity on earth right? Hell he is one of the nicest people in the world in my opinion, but if you need another proof to this fact, check out this personal story from the past. A woman named Chris Johnston shared a story about the celeb that will blow your mind.

It was back in 1990, and Chris and her cousin were on their way to California to watch her than boyfriend play in a local softball tournament. Now if you need to know only one thing about Chris, is that she is a huge Keanu Reeves fan and back than she was even bigger. So her cousin decided to take her to the home of the star for some light sight seeing.

The two ladies, being young and reckless, decided it was ok to jump over the fence of his property, casually walk up the driveway and just knock on the door, what could go wrong right? I know what you’re thinking, because we are all thinking about it too, this is breaking and entry, an offence you can and probably would go to jail too, or worst, get shot for trespassing.

But back in the 90’s, everything was chill, according to Chris:

” If this happened today, I am not sure the outcome would be the same, It was a calmer time, and I also think a more innocent time. I think if it were today, I would for sure be on the news … but I also would not do it today. Of course, older and wiser. I think being young ‘silly’ girls helped too! “

Can you guess what happened next? When reeves opened the door and saw the girls, instead of doing what most people would when two strangers show up at your door and call the cops or just defend yourself or at least be a little bit mad about the rode trespassing, Keanu, being the nice guy that he is, just started a nice conversation with the ladies.

“After we told him the story and asked him not to call the police, he invited us in, gave us a beer and spoke with us, I told him how I was there for my boyfriend’s softball tournament and reeves hearing this just took a piece of paper and  wrote a nice note for Ned and I, wishing him best wishes to him in the softball tournament. He was such an awesome guy!” 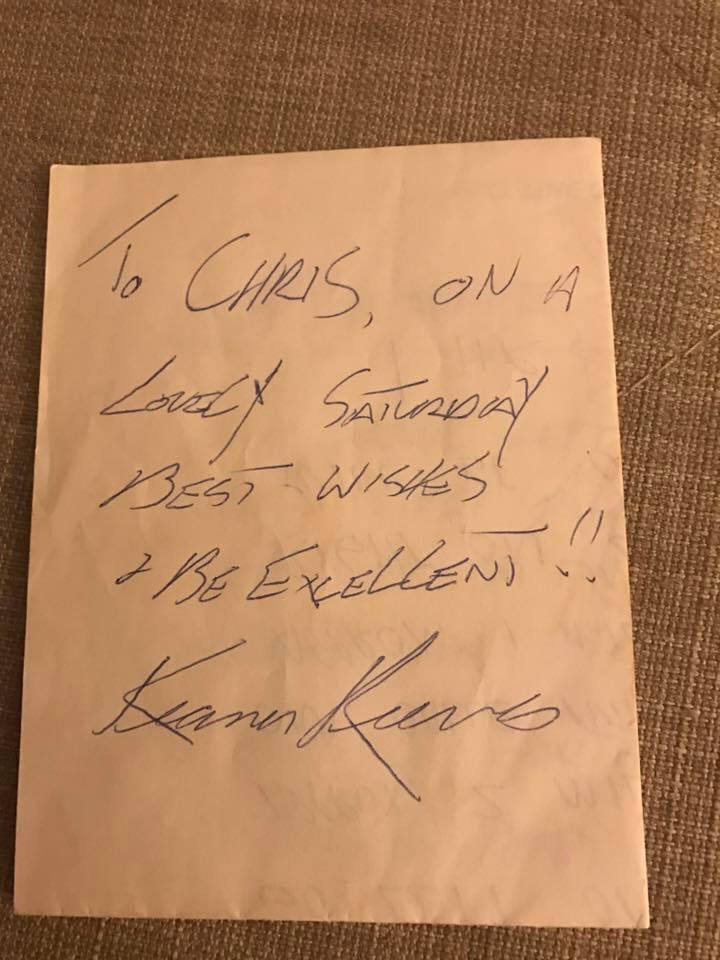 After they had a nice chat, the ladies were on their way not before they managed to get a few pictures with the movie star, when they went on their way they wanted to get the photos developed like you do before digital cameras were a thing, but she almost lost the film in a weird mishap.

” When we left, I had accidentally exposed the film in the camera, we went right to a one hour photo shop with the hopes of having the pictures saved… after an agonising wait, there were only 3 pictures that were not all yellow from exposure… I was so grateful because no one would have ever believed us. Sometimes I still can’t believe it. ”

The moral of the story? Keanu Reeves is the the nicest celebrity in the world!