Learn why were chainsaws invented - It's not for what you think

Why were chainsaws invented? Well, the TLDR version is that Chainsaws were invented to help with childbirth originally ( What?! ) YES. Someone thought creating a chainsaw is a good idea to help precious little and very gentle babies during the birth.

Before you scream, hear us out. In the old days, before C section surgeries were performed, if a baby was too big to pass through in a natural birth, they used a sharp knife to cut some areas or the pelvic to make room for the baby to come out. This process is called Symphysiotomy.

When a woman is giving birth and for some reason the baby can’t pass through the birth canal naturally, a surgical procedure is performed to widen the pelvis by cutting cartilage of the pelvic symphysis and when no caesarian section is manageable.

This was a messy, painful and not so accurate process that involved many mistakes and a lot of blood.

So, two doctors in 1780 decided the process needs to be better, so they actually invented the chainsaw to make the process more quickly, and easier.

In the old days the original chainsaws were powered by hand crank, and as you can imagine, it was much more difficult and required more human intervention.

Why were chainsaws invented – The full low down

Now, we hear you, the first few paragraphs of this article already made me clinch, I’m sure most of you as well, sounds crazy right? But remember that back in the day, a lot of stuff happend that seems crazy today.

So getting back to childbirth, before technology, and C sections all babies had to be born the natural way, meaning going through the birth canal, which makes a lot of sense right? How else would they be born?

And as we all know, babies come in many different shapes, and sizes, and a lot of situations can happen during a birth that can complicate it. In those days, if a child could not pass through the canal, you had to do what ever you can to help him or her, or the baby would not make it.

So doctors in these times used small knifes and saws to cut pieces of the pelvis and cartridge to make room, and yes, this was done without any anaesthesia and while the woman giving birth wide awake. Oh my, just thinking about it gives me the chills.

The whole thing was a mess. it took a long time, was done manually, and was very very painful and bloody as you might imagine, but people did it, and that was the way.

So like mentioned before, two Scottish doctors named John Aitken and James Jeffray decided this can’t go on and invented the chainsaw to be used to cut pelvic bone when needed. It looked something like this: 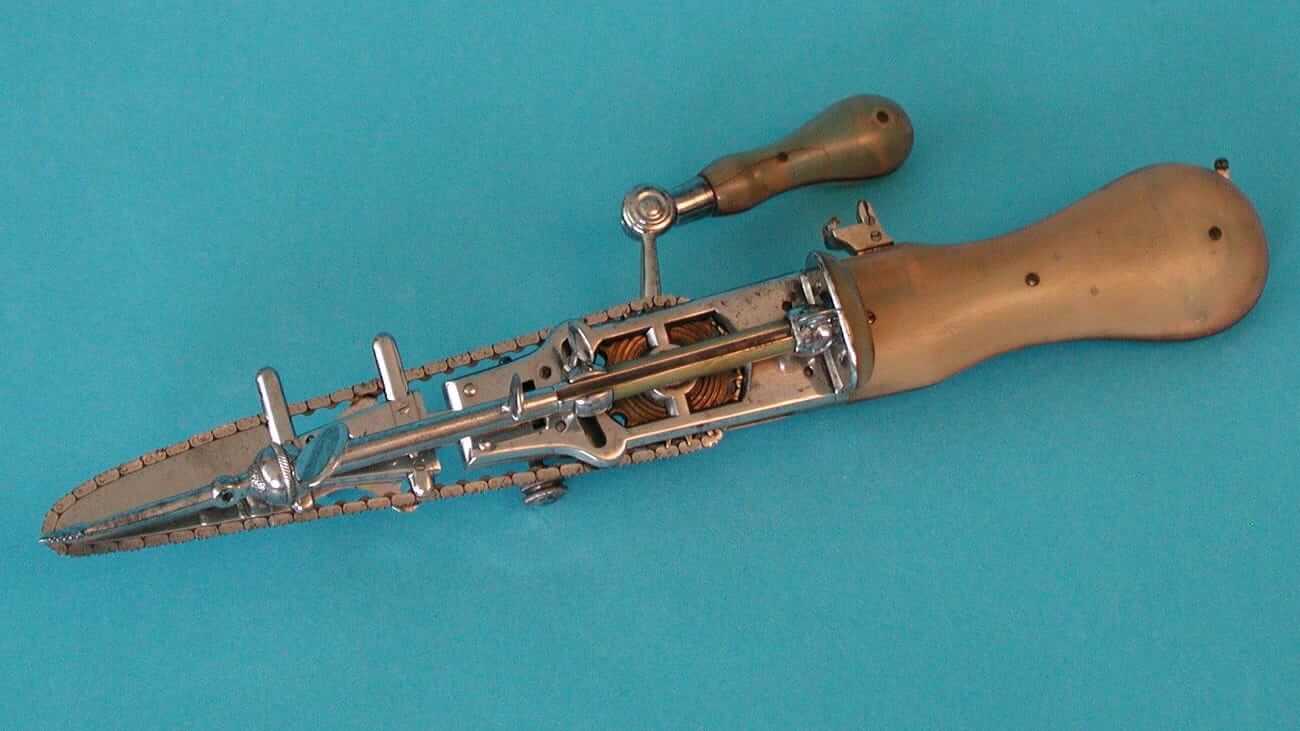 It was powered by hand, as you can see it had little teeth and a chain moving around it, with a handle you can turn to make the chainsaw work. Luckily, while this still looks very scary to me, it’s still somehow looks like a medical tool and not something you would want to cut a tree with.

The spread of the chainsaw

Once other doctors noticed that this little chainsaw can cut bone pretty quickly, they stated using it for other medical situations like amputations and eventually it made it way into the wood-working industry as people learned this tool can cut pretty much anything.

Over the years it became larger and more powerful to be able to cut down bigger and stronger things and this is where you might know it from best.

This tool is not being used today in developing countries and only in third world countries where a operation is needed and no other tools are available.

That was the history of the chainsaw and it was shocking for me to learn why were chainsaws were invented and more shocking to learn that they were NOT invented for cutting down trees.