This is the unbelievable story of US marine gunnery sergeant Brian Meyer , he was seriously injured in 2011 when defusing a bomb and it suddenly exploded , the brave soldier ordered one of his fellow marines to take a photograph of his wounds  just after it happened and he managed to force a smile. He was afraid that his injuries will affect the rest of his squad , today , he uses the same image to inspire others , Sgt Meyer is now working with fellow wounded veterans and he wants to join a major US navy rehabilitation study for six years. This is his story

US marine gunnery sergeant was a bomb technician in afghanistan in 2011 , while a device he was defusing exploded prematurely leaving badly injured , the 29 years old marine was ripped by the blast , he  lost his right leg above the knee , his right hand above the wrist and three fingers in his left hand . As he was getting treatment on the battlefield Sgt Meyer was fearful of the impact his injuries would have on his squad so he ordered one of his peers to take his picture , through the pain he managed to force a smile and gave a thumb’s up with his just ripped apart hand , he thought or hoped that this photograph will provide inspiration for his men as he began his own battle with a long recovery 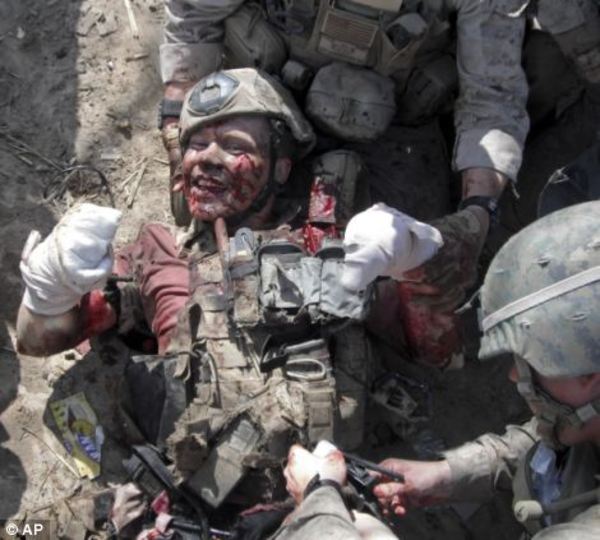 Almost 2000 US troops have lost one or more limbs in combat since the war on terror and the invasion of iraq and afghanistan began , now the naval health research center has started a six years study to help these wounded heroes rebuild their lives. So far 1,500 people have signed up for the Wounded Warrior Recovery project but the navy wants to increase this number to 10,000 , in addition to the amputees there are 50,000 people who have suffered serious injuries in combat while being in iraq or afghanistan , amazingly , 16,000 of them would not have survived in an earlier conflict 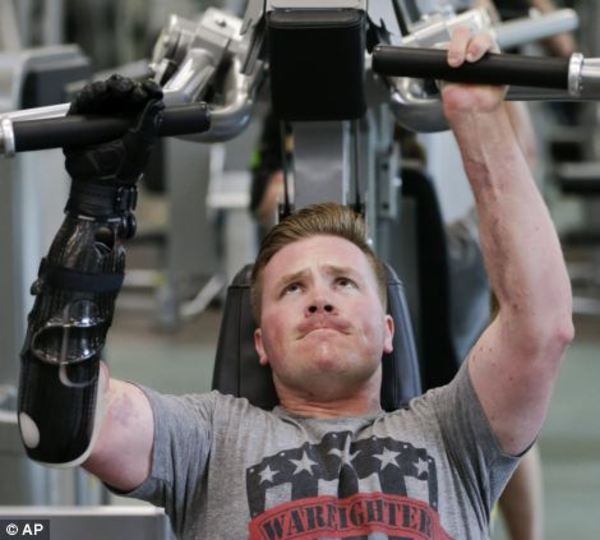 According to doctors , a positive attitude is key to recovery , so the study will also examine mental resilience of the veterans and why some of them have it and others don’t, it will rely on web-based , telephone and mailed surveys that will be conducted every six months and will be about mobility , ability to function and social activity . The goal of this study is to review how veterans such as Sgt Meyer who has suffered debilitating injuries cope and enjoy life , it will last six years and will help to understand how the injured people quality of life impacts their long term care. It is known that among the young severely disabled combat veterans population who keeps and active life style the prosthetic limbs tend to wear out very quickly and sometimes in a matter of months due to running marathons or mountain climbing , troops like Sgt Meyer are always pushing the military to find better ways to accommodate them 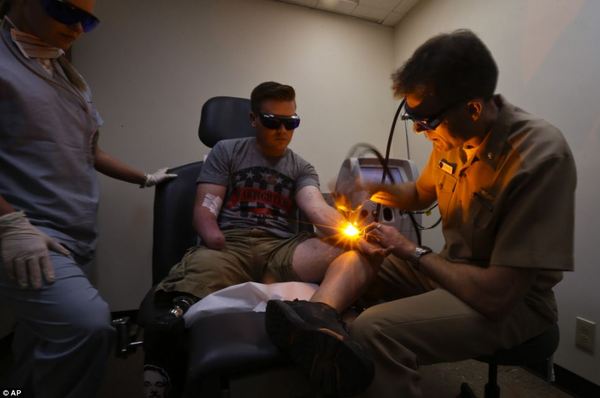 Sgt Meyer has retired , but he continues to take pioneering medical treatments by the Commander Peter Shumaker at the Naval medical center in San Diego , California . the special laser you see above helps softens the scar tissue on Meyer arm to reduce pain and allow him greater movement 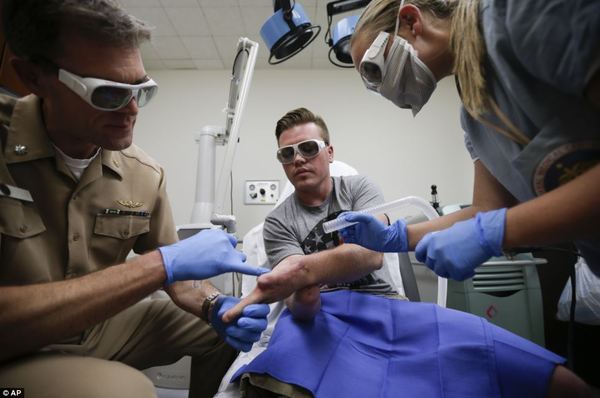 Among the projects Meyer is involved in is something called Warfighter Made , the project customises sports cars , off road and motorbikes to fit wounded veterans, Meyer says ” What we want is for a guy in the coolest car to drive up to a handicap spot and have people like ” What’s this guy doing?! ” Then they see him get out with his prosthetic legs ” 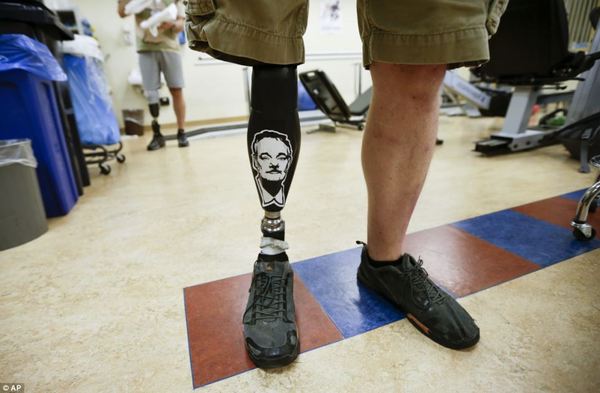 Sgt Meyer has no regrets about ordering Eric Lunson to take his injuries in the battlefield, he looks at it with a certain amount of pride, ” Its the exact opposite of what somebody expects you to do, so when i show it to people they are inspired by it, instead of being shocked, I know they get it ” 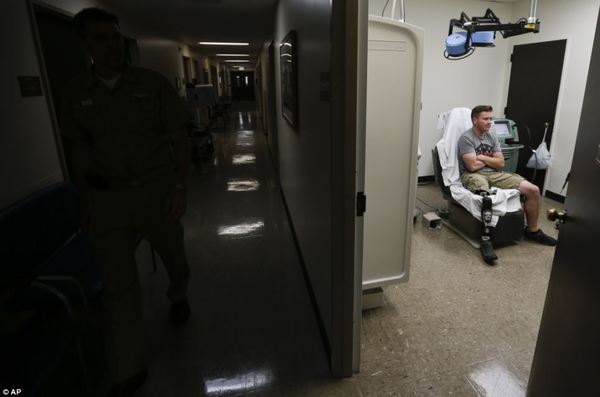 Chief of dermatology at the Naval center in San Diego Commander Peter Shumaker has really pioneered some of the techniques that are being used on severely injured veterans , he said ” Its a privilege to work with soldiers and marines , like Brian , because they are young and motivated and healthy and they can go farther than we ever thought ” 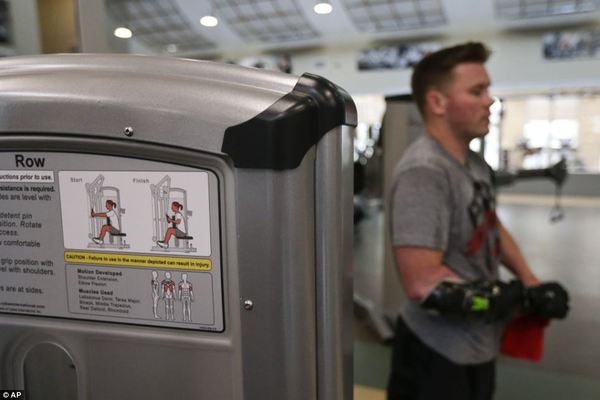 Early in his rehabilitation , Sgt Meyer refused offers to install ramps at his home as he wanted to lead as full a life as possible , he said ” I focus on what i have left , not what i lost ” 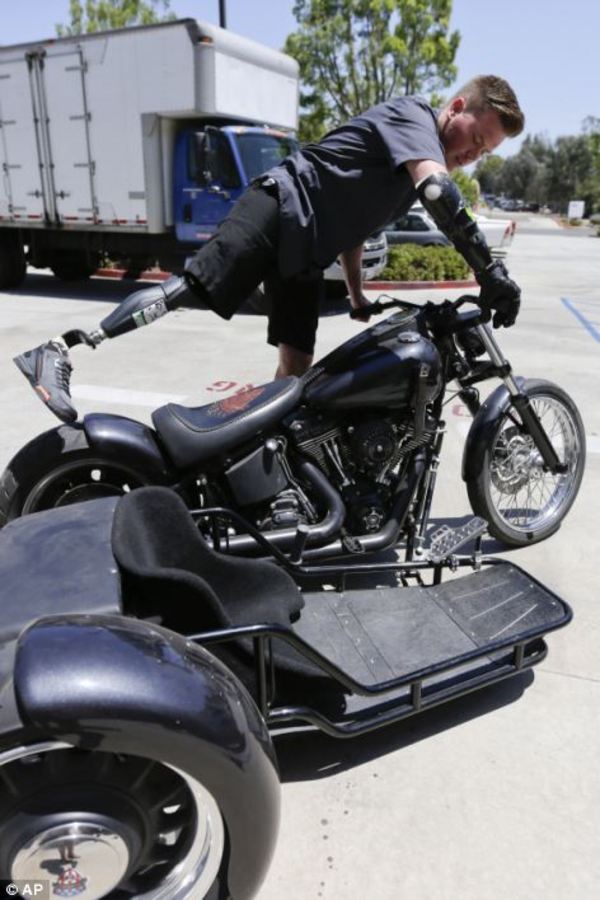 Thanks to the revolutionary laser treatments Meyer takes that softens his scars , he is able to operate his motorbike using only his two fingers in his left hand 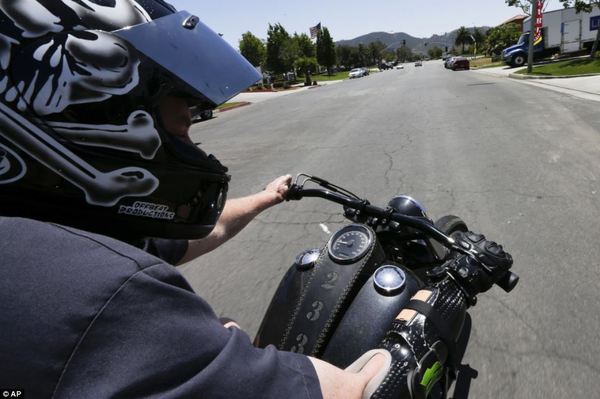