In the old days, it was hard to convey a complicated thing back to your audience or class. Thank god we know have the internet so that we can use simple images or videos to explain eve the most complicated things back to the people you want.

The gallery below will show the world economy explained with just two cows. Simple as that. Obviously everything here is very simplistic and basic, but there are truths here. Which of these do you like the most?

1. Traditional Capitalism – You have two cows. You sell one and buy a Bull. Few years later you retire on a beach somewhere 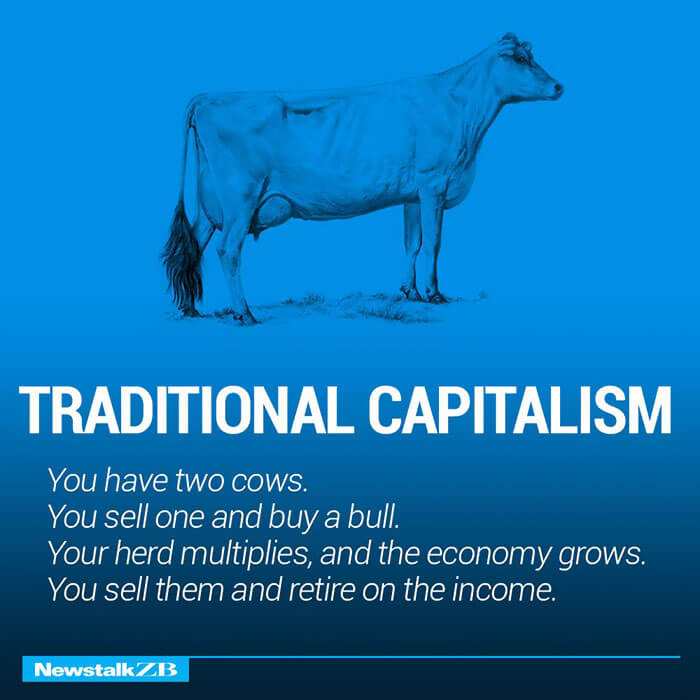 2. Greek corporation – You borrow your cows from the German with no intention to ever bring them back. 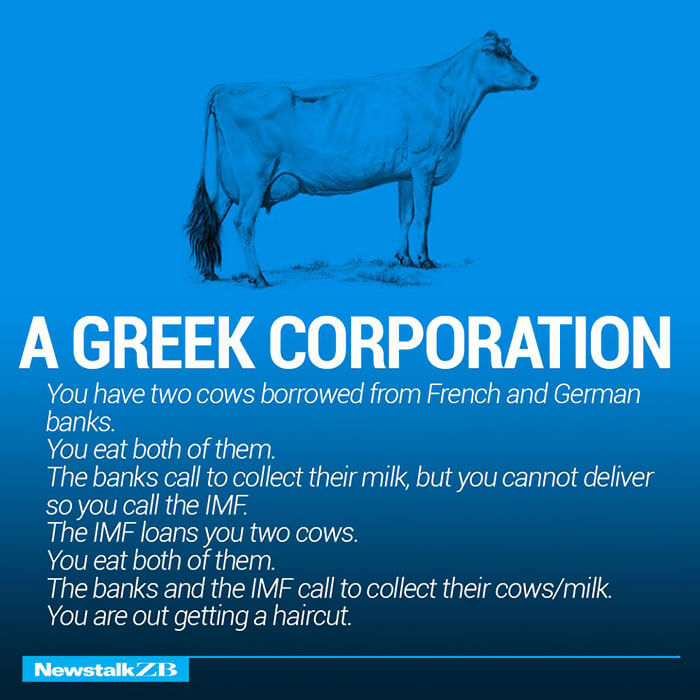 3. An Indian corporation – You worship your cows 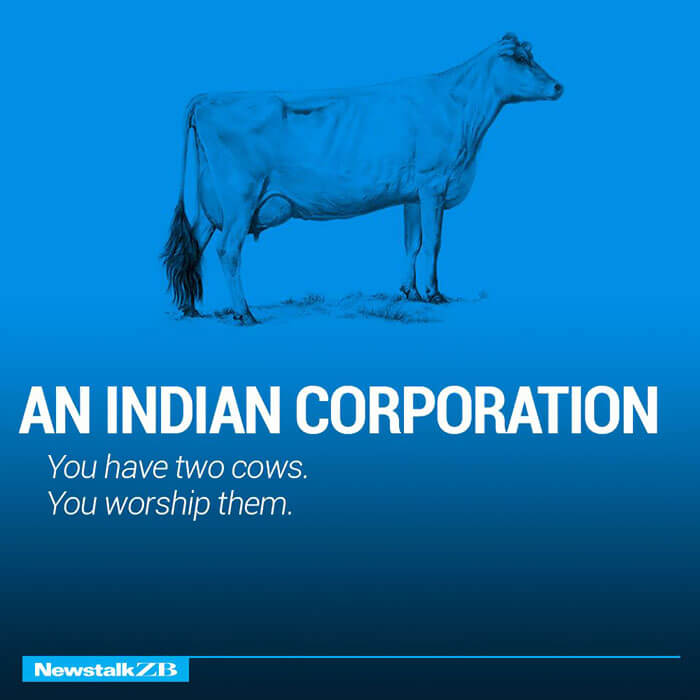 4. An Italian corporation – You lost your cows. You have lunch instead 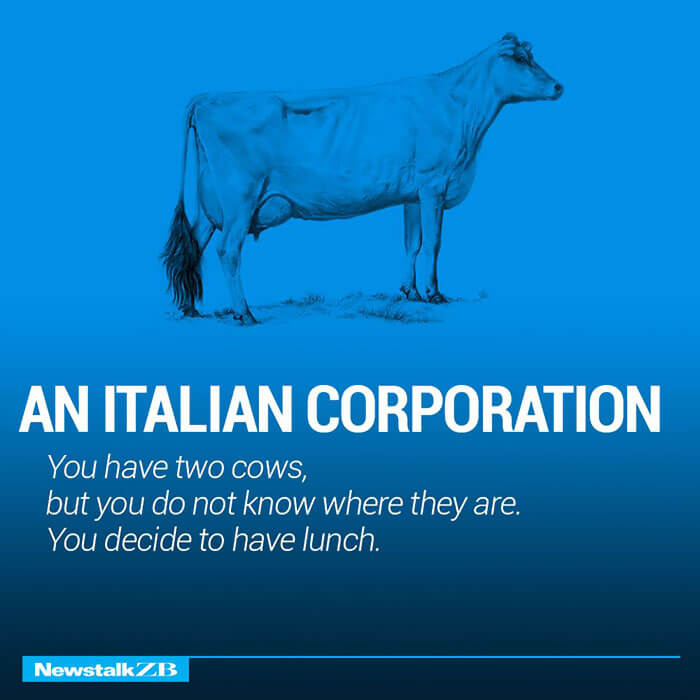 5. Venture Capitalism – It’s a big mess, but someone is getting rich 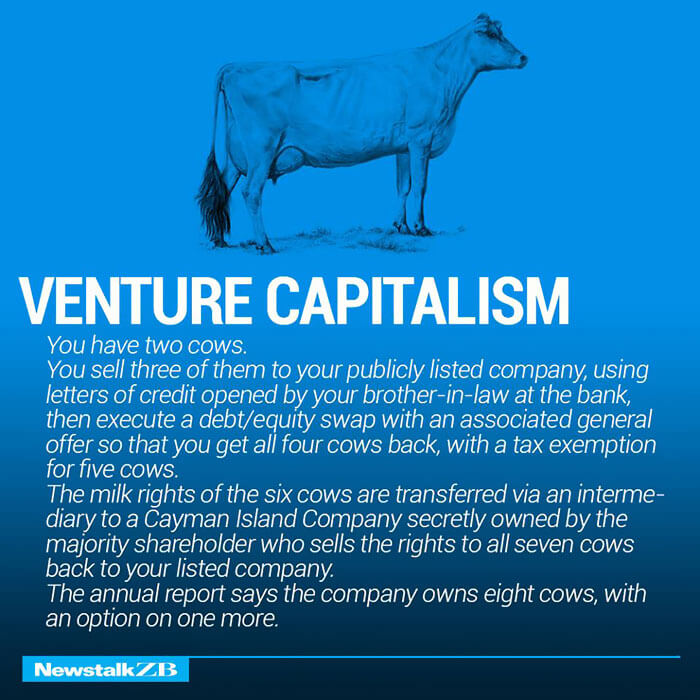 6. Australian corporation – You have two cows. Success, go have some beers. 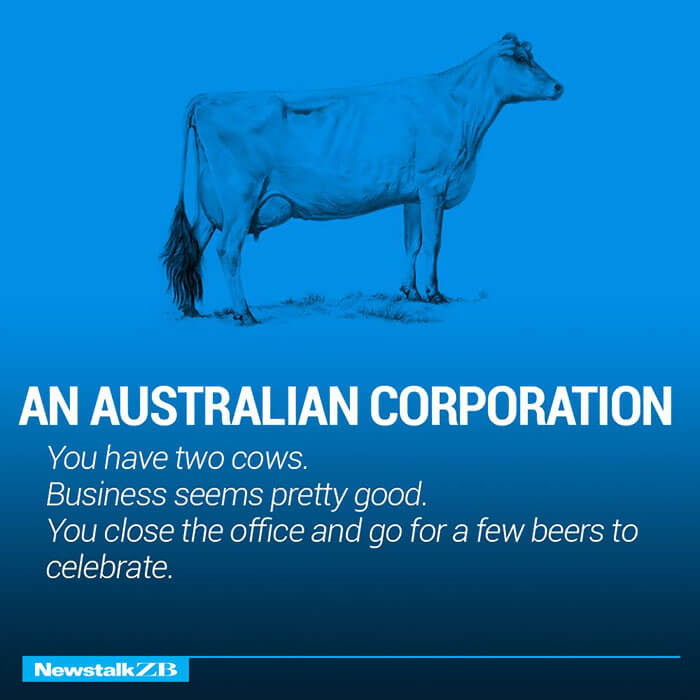 7. A french corporation – You have two cows, you go on strike, block roads and cause riots because you want three cows. 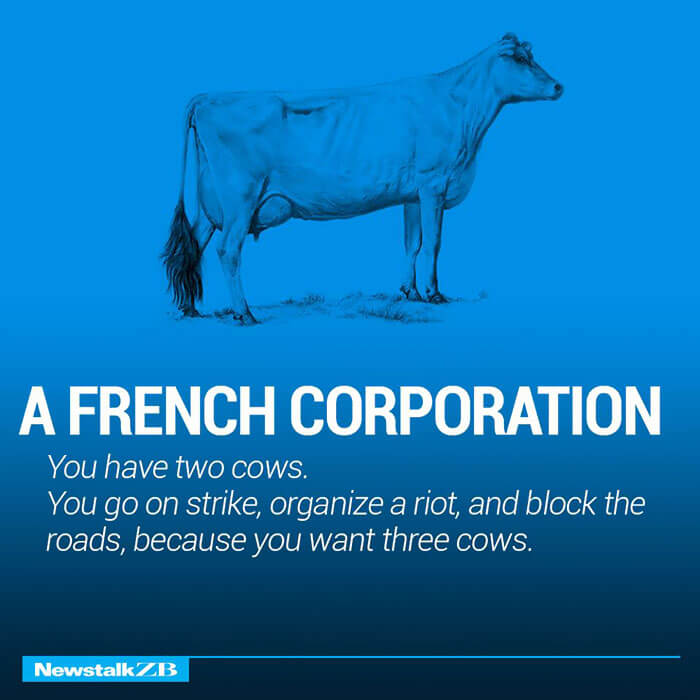 8. A Chinese corporation – you have two cows, you employ 300 people to milk them around the clock in horrible conditions. 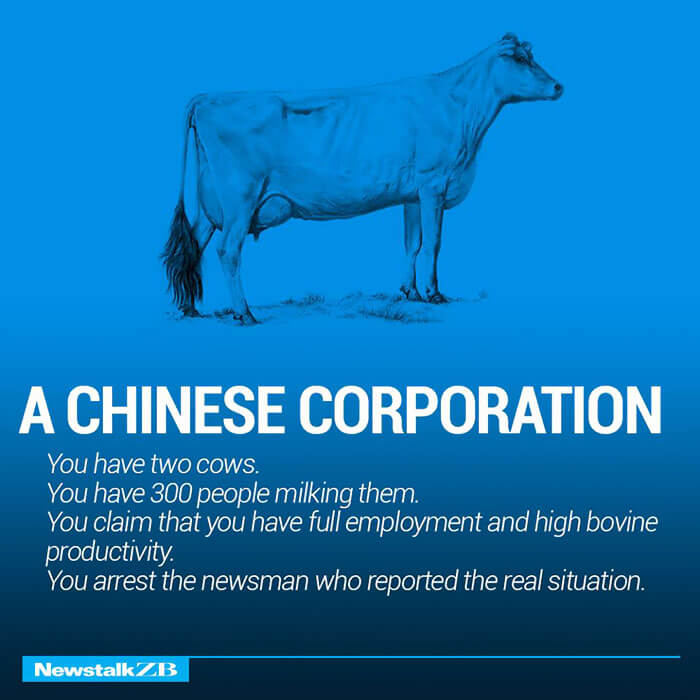 9. A British corporation – Both of your cows are extremely mad 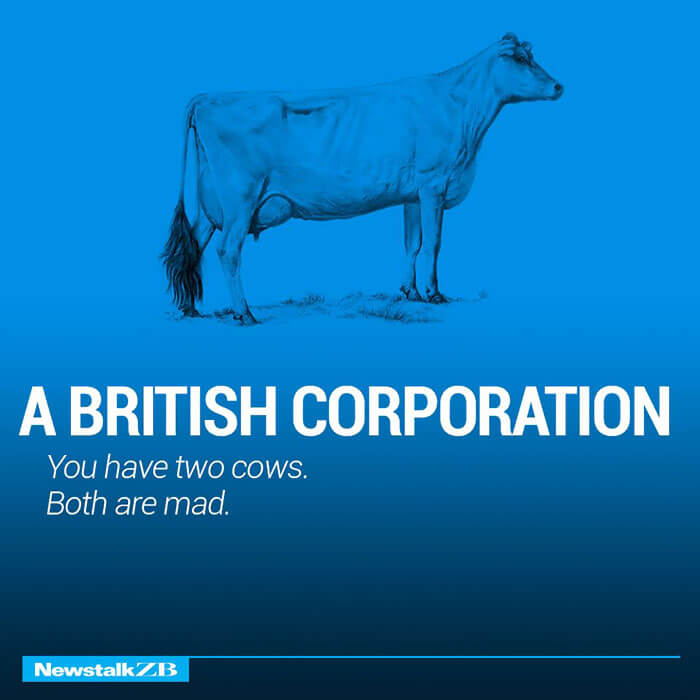 10. An Irish Corporation – One of your cows is a horse 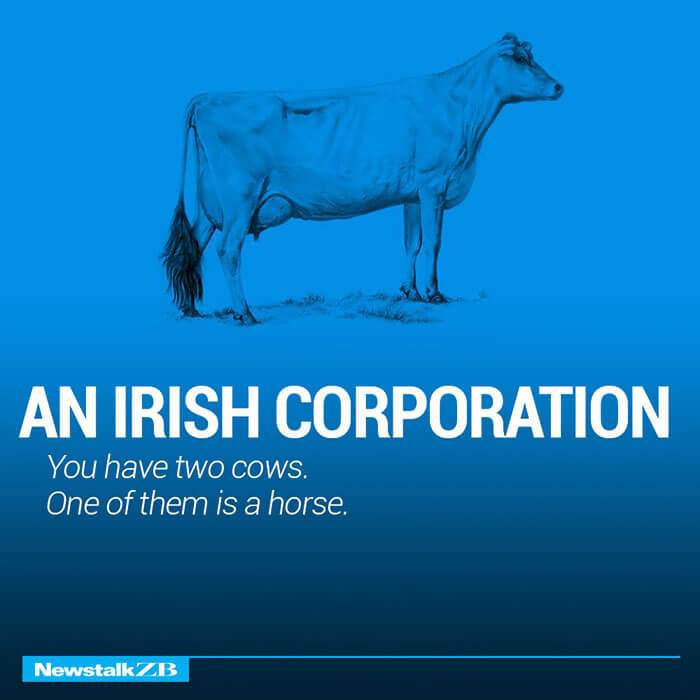 11. A Swiss corporation – You have 5,000 cows that don’t belong to you but yet you charge the owners a fortune just to store them. 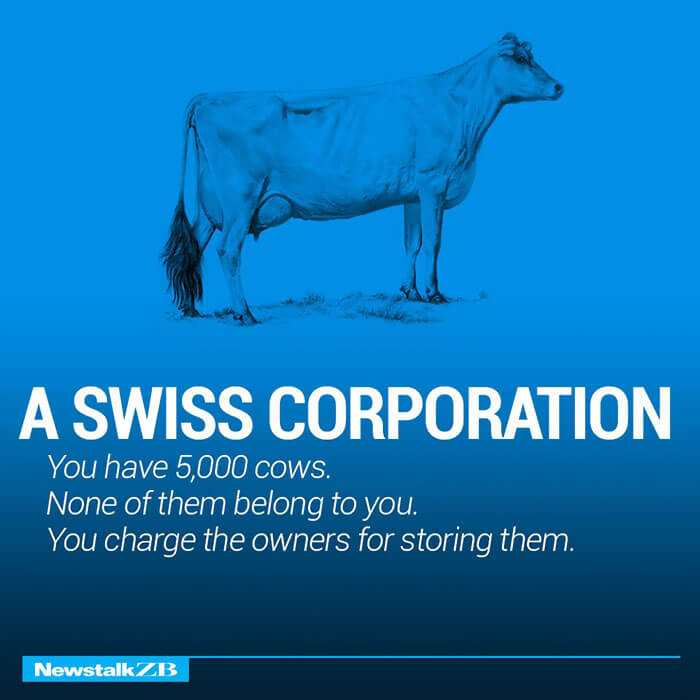 12. Communism – You have two cows, the state take both, maybe gives you some milk so you won’t die. 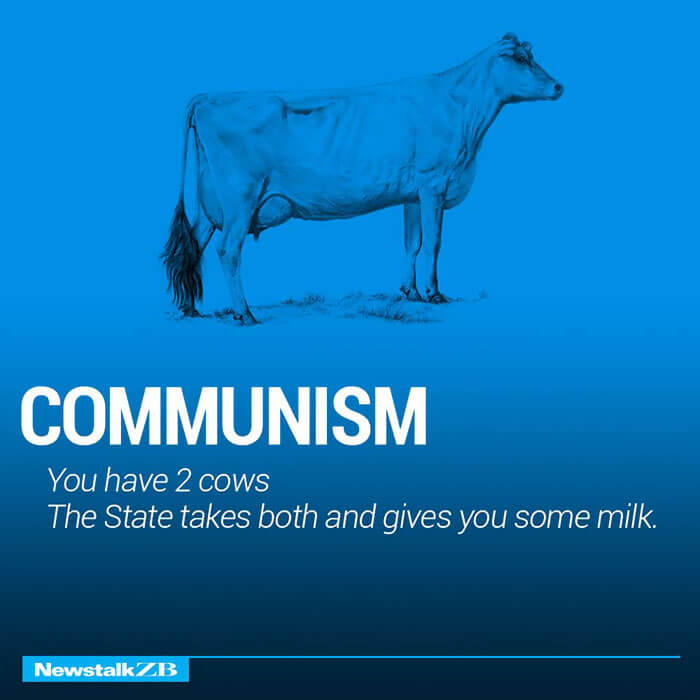 13. Iraqi corporation – You have no cows but everyone thinks you have a shit load of them. They bomb you, destroy your country and forgets why they did it 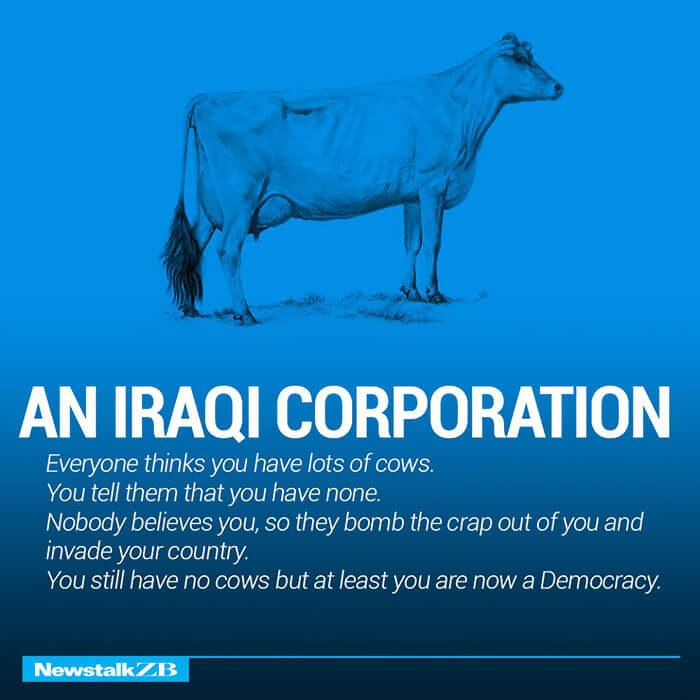 14. Bureaucratism – The state shoots one of the cows, takes the other one, milk it dry and throws it away. 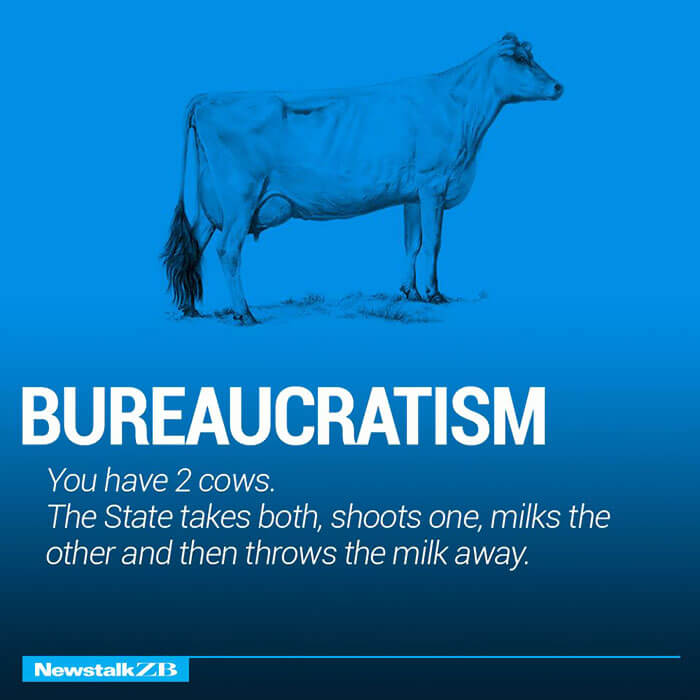 15. Socialism – You give one of your cows to your neighbor 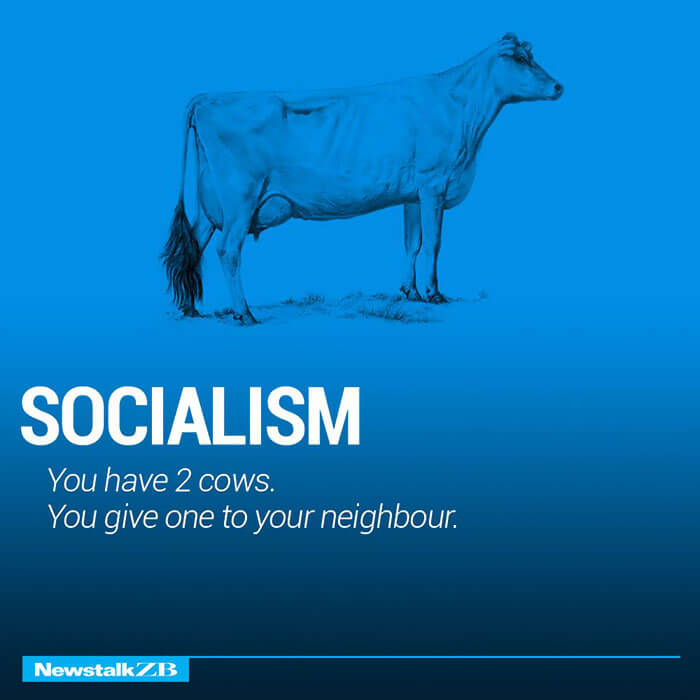 16. Fascism – The state takes both of your cows and sell you some milk expensively. That’s economic right there. 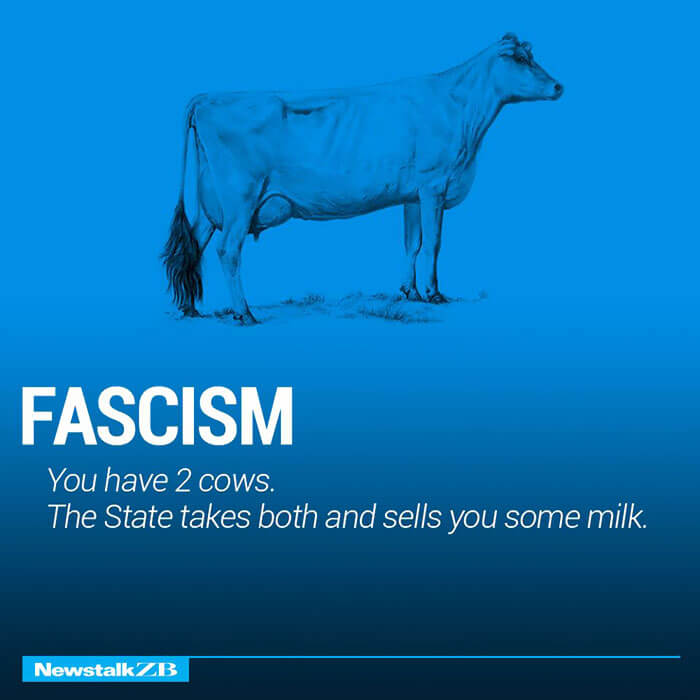 17. Surrealism – You have two giraffes because the government wanted 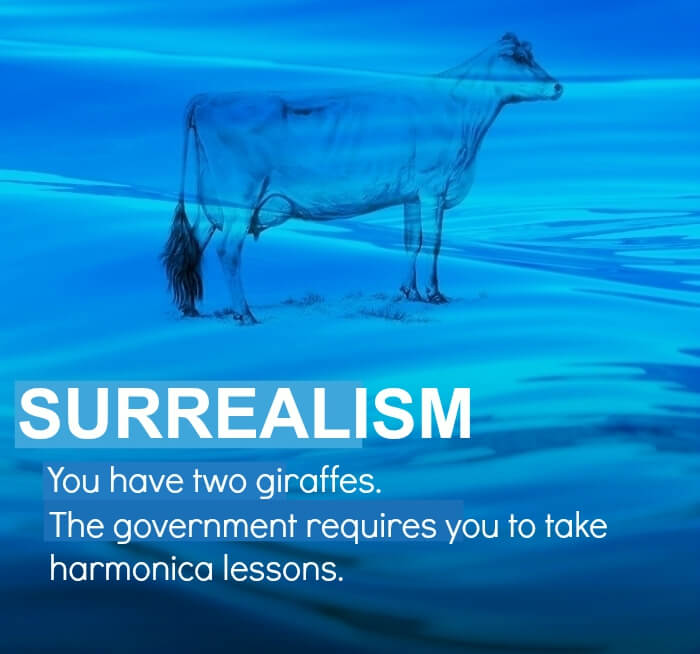 18. A Canadian corporation – Both of your cows are sorry 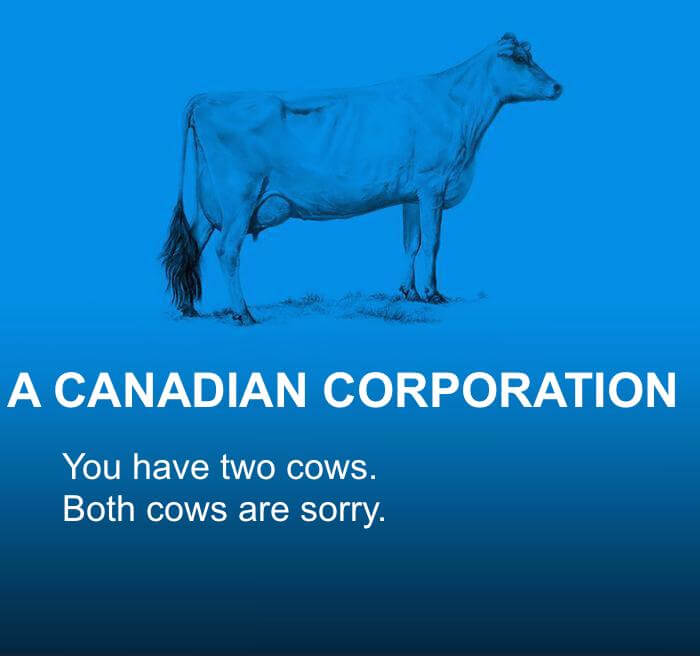 19. Czech corporation – someone steals your cows, you go have a beer 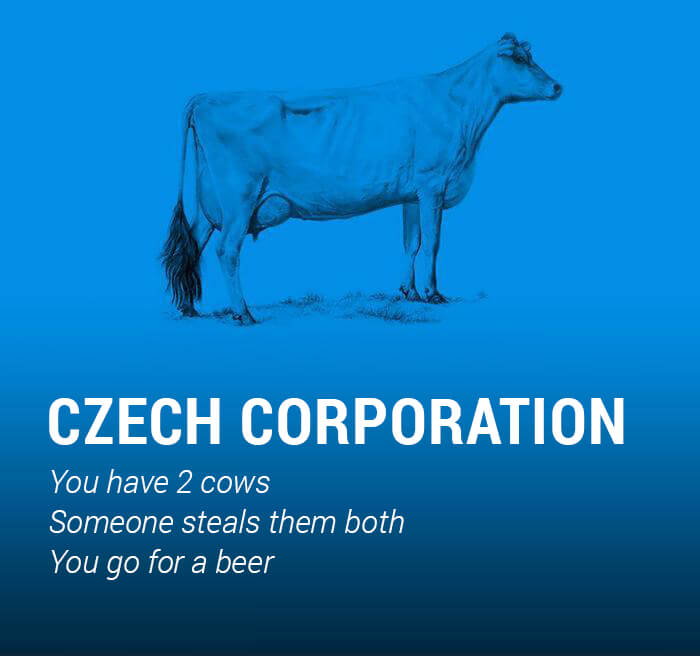 20. A Dutch corporation – You have two cows, they declare to be gay and refuse to give milk. You give them rights as citizen and everything is right with the world 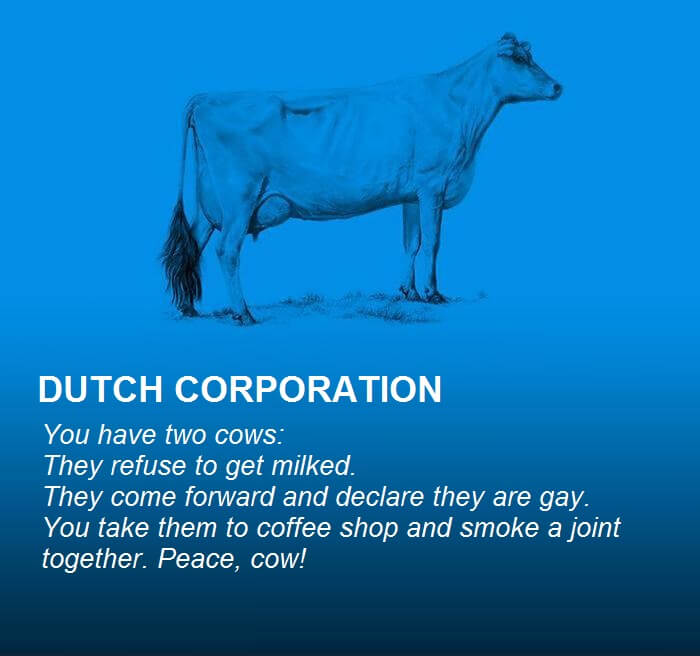 21. A hungarian company – You need to be a party member to get some cows. That’s it. 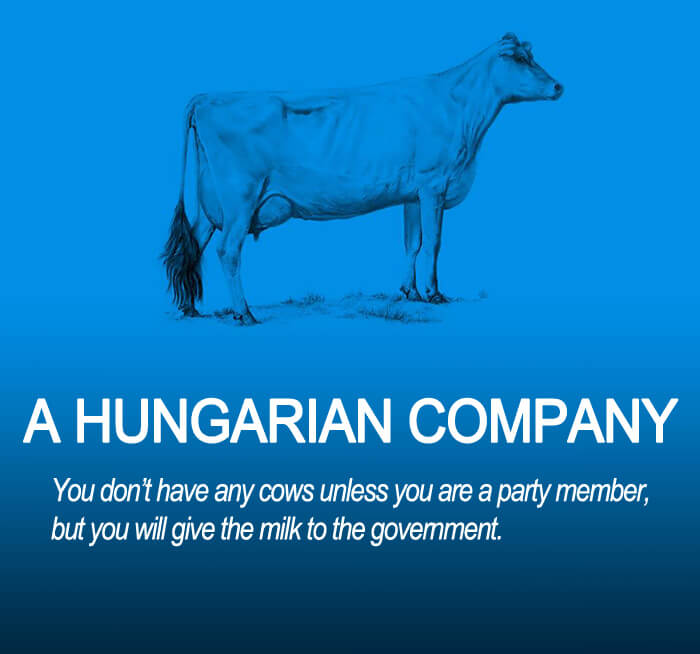 22. Mexican dictatorship – everyone gets killed by drug cartels 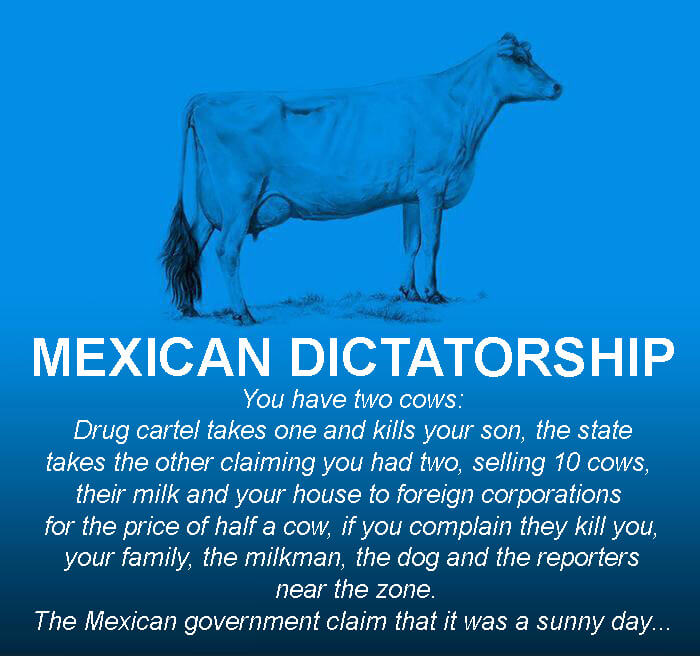 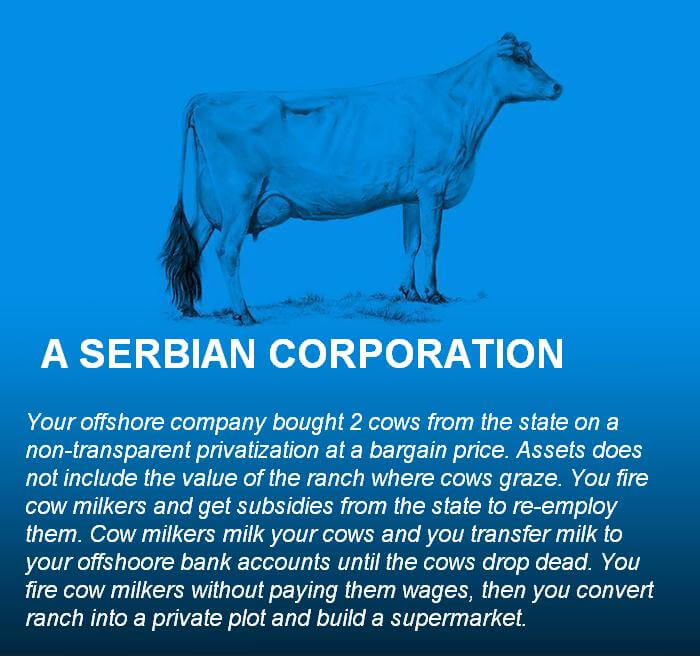 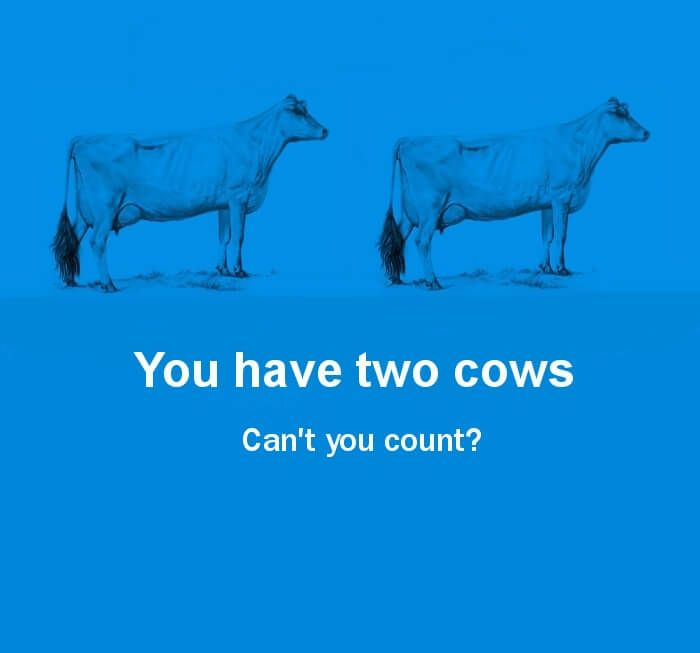 25. Brazilian corporation – you get in trouble and get arrested 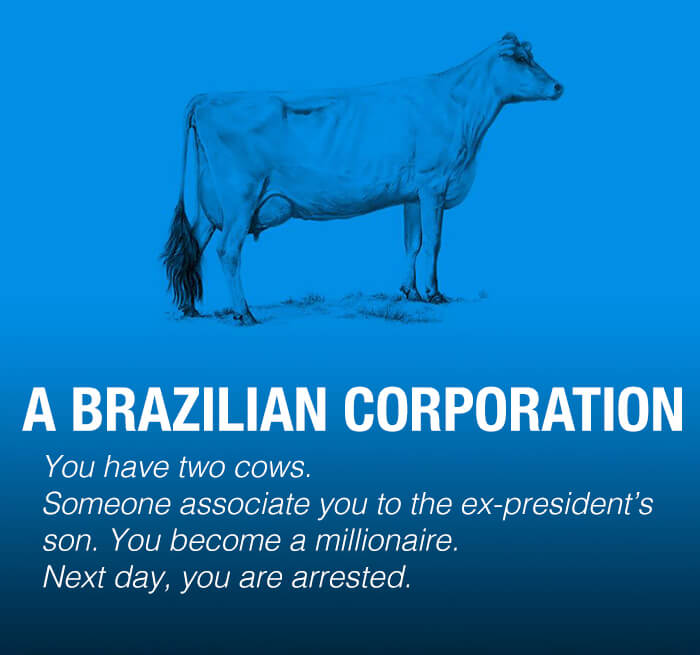 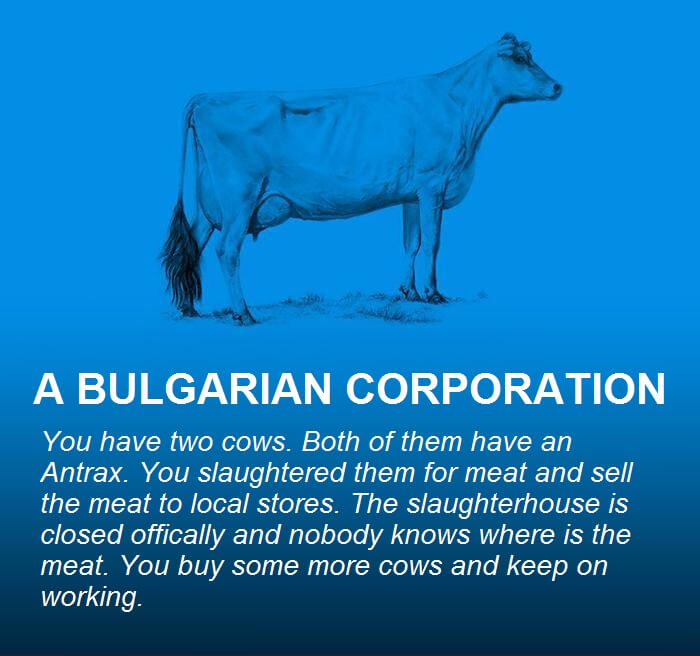 27. A Belgian Corporation – you have two cows that speak different languages. 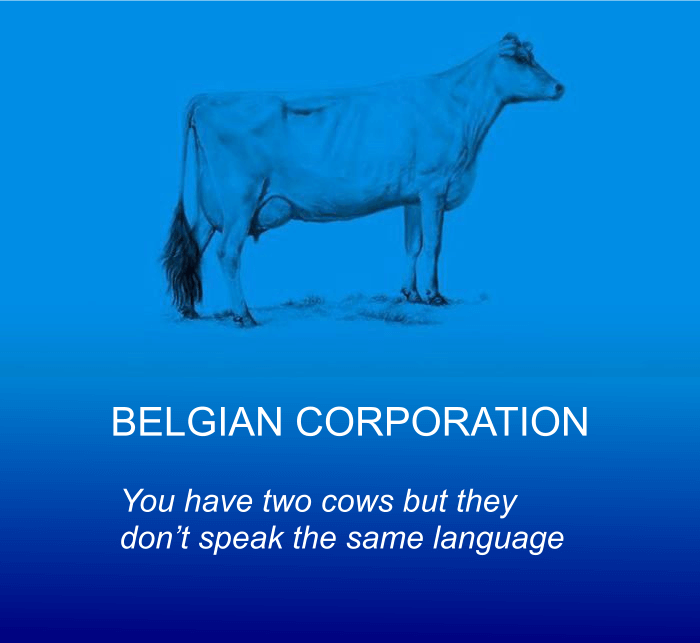 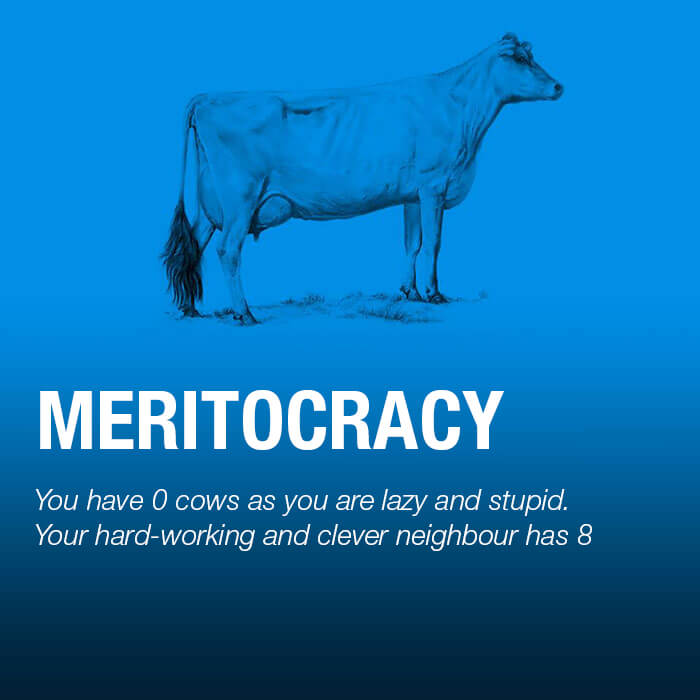 29. A Bulgarian Corporation – you turn your cows into a horse 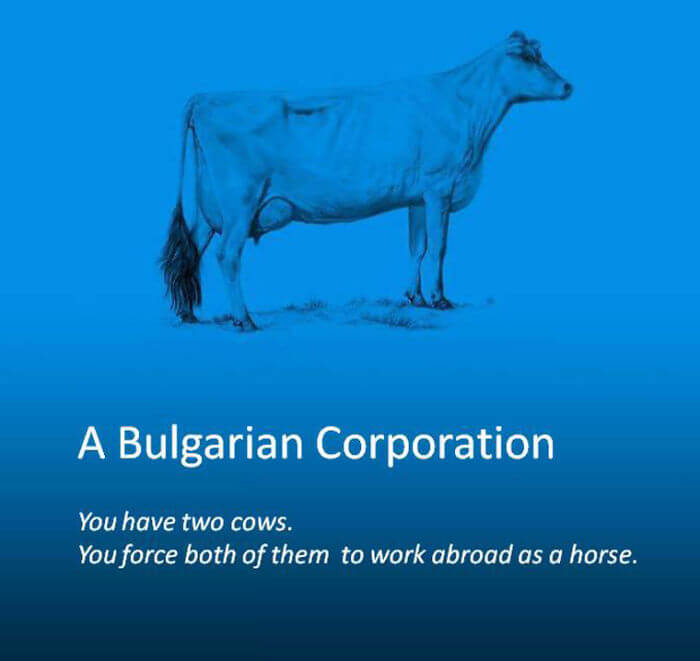 30. An American Corporation – Basically you work your cows to death and then investigate why they died 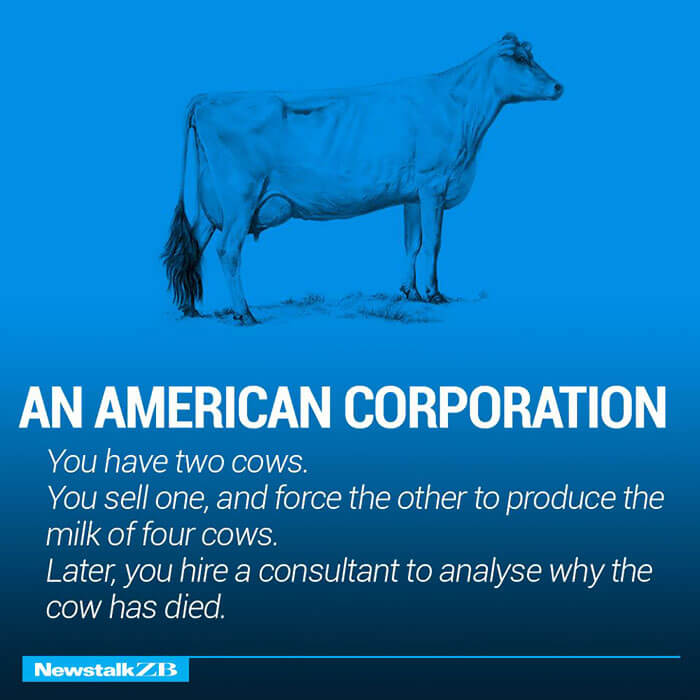 The world economy explained with just two cows is a cool idea in my opinion. If you agree. Please share.