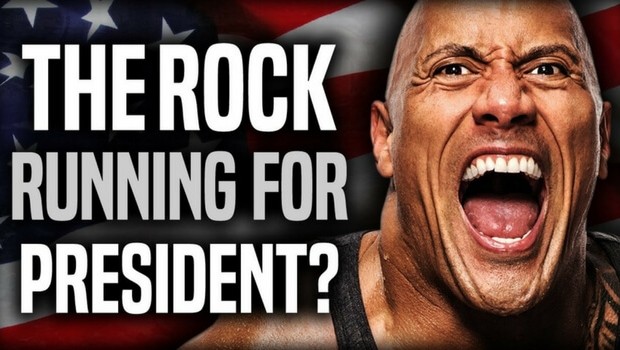 Wait, what? But then you come back on Earth and remember that Donald Trump is president now. So, if he’s president, why wouldn’t The Rock be the next president of the United States? We’ve already had Arnold Schwarzenegger as governor, so The Rock seems like the best next president, right?

Now, leaving the jokes aside, Dwayne Johnson was on Ellen this week and said he is seriously considering running for president. “If he were to put himself in that position, he would get my support wholeheartedly. I know where his heart is. I really know him. So I know if he puts himself in that position, it’s for the better of the people. I can only applaud him and support him for doing that”, said Jumanji co-star Kevin Hart.

On The Graham Norton Show, last week, the pair was less serious about this issue.

“100%. I will take you down. I don’t want it to happen because it will make you that much better than me, and I just don’t want it. I would sabotage it in a heartbeat”,

But there’s another Jumanji co-star that thinks The Rock will be a good choice for the next president of the United States. Karen Gillan told Metro.co.uk that: “He’s such a good leader in a situation, I just feel like he needs to run the world one day. I think he should. I would vote for him. She called him “genuinely one of the most generous, kind, professional human beings that I’ve ever encountered”.

Apparently, Johnson has flirted with the idea of being the next president of USA for a year os so, whether he was serious about it or just said it as a joke. In May, this year, he said on “Saturday Night Live” that he is announcing his campaign and Tom Hanks will be his running mate.

So, would you vote for him? He might be better than Donald Trump, or will he bomb? What do you think?

Related ItemsnewsWTF?
← Previous Story Georgina Ryland Body Paintings Of Pop Culture Movies Is a First And We Like It
Next Story → Ceramic Donuts by Jae Yong Kim That Are Too Good Looking Not To Eat