The Oldest Poo In The World. Yes, You’ve Read That Right!

“It’s insulting, really. This is the most exciting piece of excrement I’ve ever seen, in its own way, it’s as irreplaceable as the Crown jewels”, said the director of the Jorvik Viking Centre about the Viking poo that was valued at $39,000. Yes, we’re talking about a piece of shit, one of the oldest poo in the world and most expensive ever. It is widely known as the Lloyd’s Bank Coprolite. It was found in York, in 1972 and this article is NOT a joke.

The Lloyds Bank coprolite is the largest example of fossilised human faeces ever found. It measures 20 centimetres long and 2 centimetres wide. This incredible specimen was first put on display at York’s Archaeological Resource Centre. In 2003, a teacher who was on a school trip dropped it and it broke into 3 pieces. The work to reconstruct it became quickly after and, in the end, they glued it together and now is in display at Jorvik Viking Centre, in York, England. 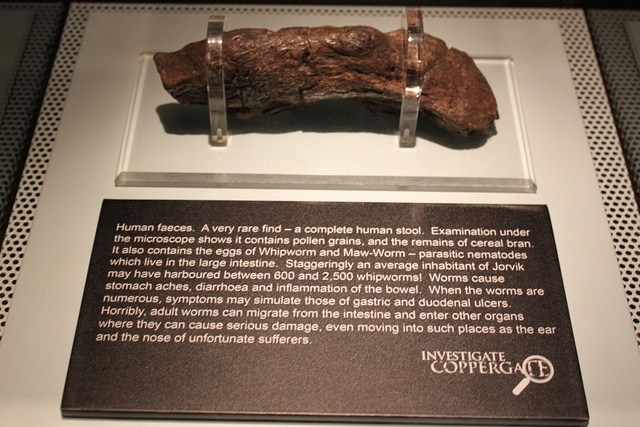 Specialists have determined that it belonged to a Viking that lived around the 9th century AD, during the Viking Age and whoever is that man, he hadn’t performed for a few days and his bowels were quite itchy.

Why is this poo so important?

First of all, most of the fecal matter found in Archaeological excavations are quite mixed together. This one fabulous piece is a whole, completely pristine after 1000 years. That Viking should be proud that now we are examining his poo. Why are we doing this? Because it can reveal important details about the meal habits of its…shall we say, master? Analysis has shown that the poo’s creator had a diet based mostly on meat and bread. They also found pollen grains and several hundred parasitic eggs (whipworm).

Yeah, we know, this might be a very hard to watch picture, but imagine you walk into a museum and see this. If you don’t know it’s poo, well, it’s not that bad.

Anyways, let’s go back to our Viking poo analysis. It can tell a lot about the parasites that Vikings had living in their guts, their intestinal worms. Specialists found at least two varieties of parasitic worms in there. The poo also reveals a lot about the Viking diet which was very high in fibers.

You can also see that in the size of it. It must have hurt. Also, scientists are trying to get DNA out of it and thus learn more about the Viking gut flora. Anyways, don’t underestimate the value of your poo. Next time when you poo in the woods just think that maybe they will find your poo some thousands of years after and be amazed at the McDonald’s food. Ever thought about that?

23 Things That Have Perfectly Fallen Into Place