The Spider Clock everyone has been talking about

The Clock Spider is a widely known huntsman spider that was presumably found by someone while visiting a relative’s house, when he suddenly noticed the legs of a huge spider poking out from one side under the wall clock.

He managed to take three photos before running from the house scared shitless. The first pic is of the clock on the wall where you can see the spider’s legs poking out.

The second picture shows the spider on the wall after the clock was removed. It’s unclear how they removed the clock or just knocked it down with something or the spider just moved away from behind it. The third and most terrifying photo is a close up of the giant spider where you can actually see its fur.

According to some legend who may or may not be confirmed, the spider used to have nine legs, but he lost one while fighting with the lime cat and won! Becoming a legend from that moment and dubbed as ” God “.

There are has been another rumor that the spider will send all of his worshipers huge pieces of cheese on judgement day, but until that day comes, it’s more likely that it will eat all the cheese along the way so this doesn’t check out right? Check out the creepy pictures of the spider clock below. 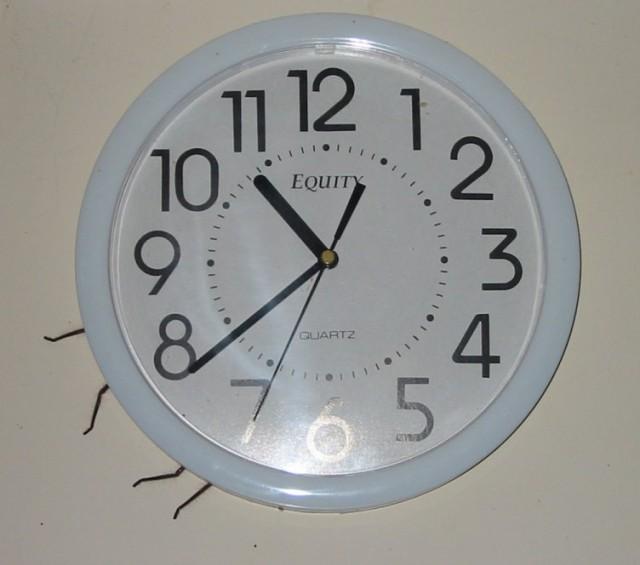 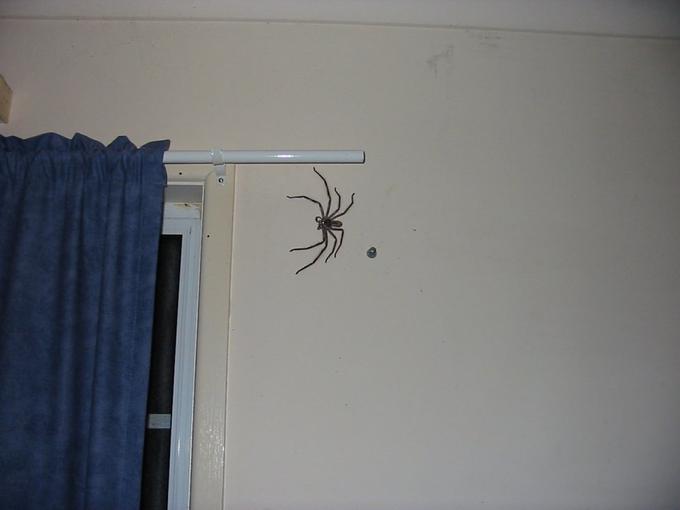 And the last one and creepiest of them all, look at its size! You can see his fur OMG!! 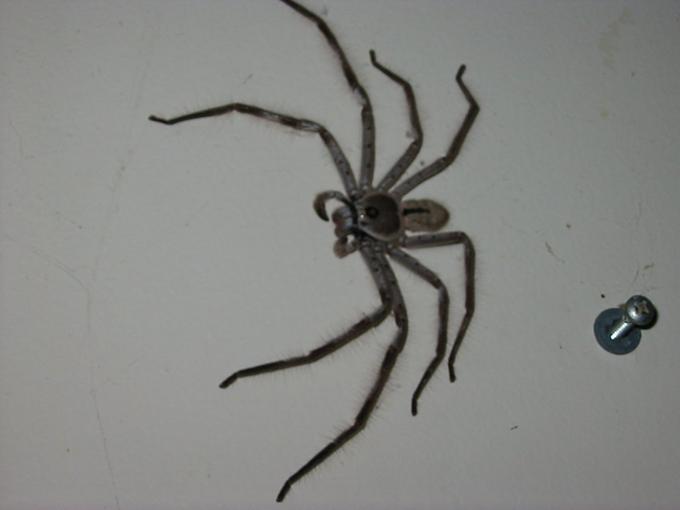 Not sure why I even wrote about this issue, it’s too creepy to look at, but if you’re into this kind of stuff, show your love with a share.

Here’s a video of a similar spider creeping on a clock.

granted it’s not the same one, but it’s scary enough to be included:

The legend of this spider hidden behind a clock quickly spread around the internet like wildfire, and as you can see from the Google Trend graph below, people really love to see photos and search about it:

More about the Huntsman spider

If you ask people what are their biggest fears, a high percentage of them will say they fear spiders. So this species that can grow into a big size is considered very scary to many people.

Just think about it, it doesn’t matter how brave you are, if you notice this spider creeping up behind your wall clock you would freak out as well for sure.

How the spider looks:

As we mentioned above, this spider comes from the species family of Sparassidae and what makes them unique is their large size and the fact they have eight eyes – four eyes in each row on the side of their head.

It has been said that there is a Huntsman spider in Laos that reached a leg span of 25 to 30 CM. Some people who don’t understand spider and spider species mistakenly think these spider to be Tarantulas, but it’s easy to see that these spiders have long legs that look more like a crab legs than a spider legs.

You will most likely find these spiders under rocks ( or hidden behind clocks ). In more human settings, you will find the clock spider behind garages, sheds and things of that nature.

The spider has really good vision so they are able to spot humans or other large objects from relatively far away, this gives them enough time and warning in advance to run a hide and might be the reason you never really saw such a spider in real life.

A fun fact about the clock spider is that before the urban legend about it rose to fame, there were other references to the species in a very popular movie. Yes, that movie! Spiderman.

The hero of the movie Peter Parker gets beaten by a spider of the same type – the Huntsman.

Like many other spider species, the Huntsman can also produce venom and use this as both hunting and protective method of protecting itself from other predators.

Is the Sparassidae family of spiders dangerous to humans?

Yes, the Huntsman spider can bite humans and in some cases cause harm. While most spider bites will not cause anything more than just a little mark on your skin, the Huntsman long thangs make his bite to be more harmful and can cause some harm to humans as well in the form of inflammation and pain.

People should be aware that there is one Huntsman species in Australia that has extremely strong venom called Neosparassus that can cause you nausea, headaches, vomiting and similar symptoms if it bites you.

These spiders are born in greenish color and slowly change it into brown as they mature.

While the spider can be found in most areas of the world, it was only just recently that it was discovered that the male Huntsman spider shells out a mating call when he detects the female pheromone.

At that point the male will try and locate the female by following up the trail of pheromone, and once it has been found, the male will lower itself to the ground and anchor itself firmly.

At that point they will start to vibrate at high speeds to transmit their sounds. Most of the sound originates from the abdomen part of their bodies. Interesting enough, each male has its own unique vibration sound that helps the female spiders to distinguish between the males that are pursuing her.

When a female finds a suitable mate, she will approach to the source of the vibration and copulate with it.

To humans, these vibrations might sound like a ticking cock, but it is unlikely you will hear it in a daily environment as it is very subtle and needs to be in a quiet area to be heard by humans.

We hope these words will make you more educated about the legend of the clock spider, and next time when someone brings it up, you can share your new found knowledge of the topic.

24 Pokemon Shoes That Every Fan Should Wear At Least Once

24 Pokemon Shoes That Every Fan Should Wear At Least Once