Meet the man who refused to freeze to death!

What do you do if you are completely lost, wet and freezing in one of the windiest places in Europe which also happens to be a massive wilderness covered in snow? Such stories of survival are only possible in movies, you might say. Nevertheless, you forget that movies are inspired by our very lives and trials and aspirations and that sometimes, somehow, the human body’s ability to adapt, exceed its limits and survive is extremely remarkable and almost unfathomable to most of us.

Heimaey is the largest island of the Westman archipelago, situated south of Iceland. On March 12, 1984, the 23-year-old fisherman named Guðlaugur Friðþórsson limps, bare-feet, in the snow, towards unimaginable salvation after he has swum for six hours in 5C waters, only wearing a shirt, sweater and jeans.

Heimaey is the only inhabited island of the all Westman archipelago and about 4, 135 people live in its main town called Vestmannaeyjabaer.  The town is sitting near the Eldfell volcano which has erupted in 1973, forced the evacuation of the entire population to mainland Iceland and the dropping of 6.8 billion litres of cold seawater. All in all, the island features a subpolar oceanic climate and very strong winds, up to 140 mph. The main wind directions are easterly and south-easterly. 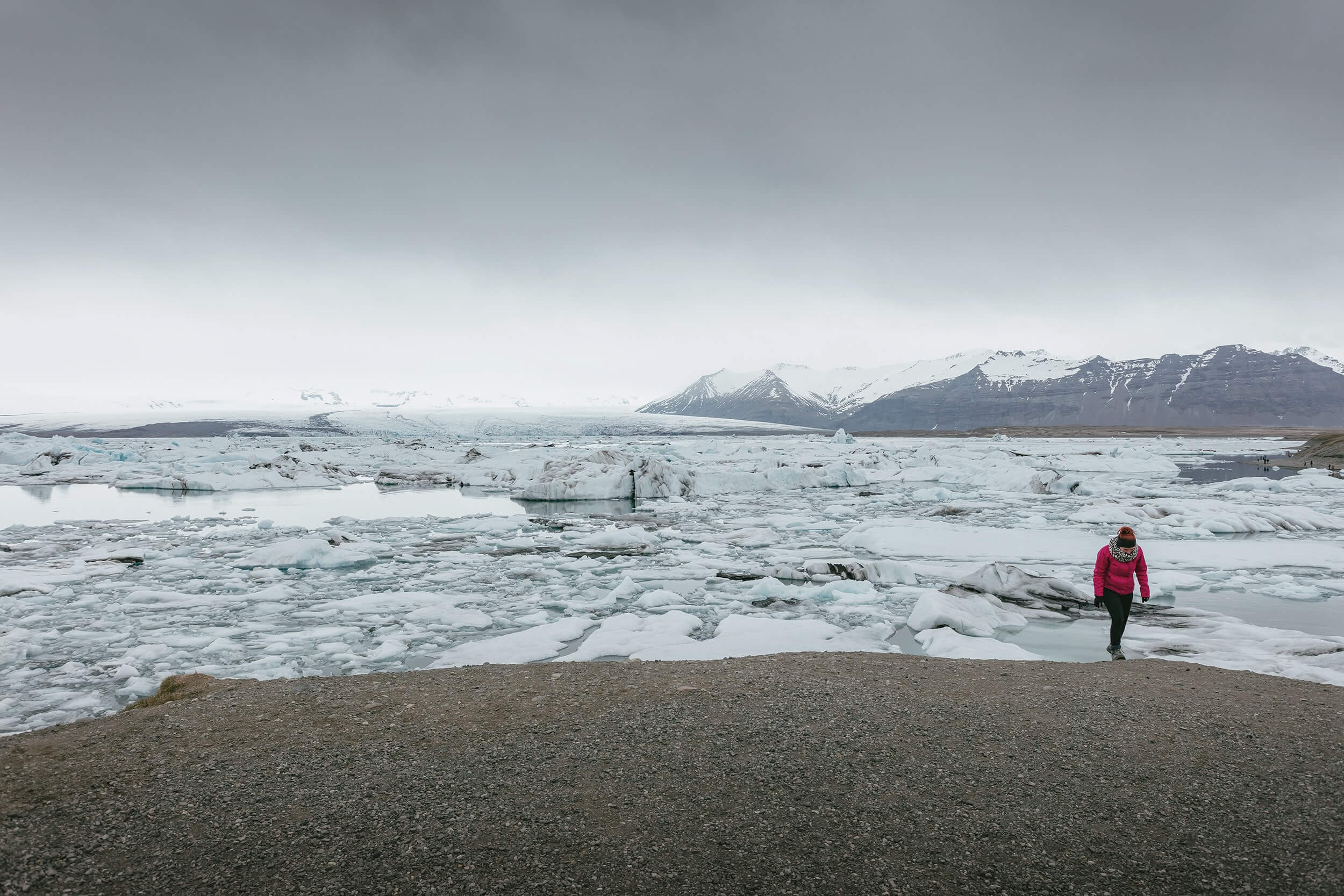 Meet the man and his story!

Guðlaugur Friðþórsson is from Iceland and he is a fisherman from Iceland who was doing his job with other four fellow fishermen near the Westman Islands, on 11 March 1984. Their boat sunk mostly because the weight of the trenchers on it was too much for the shipping vessel. Guðlaugur and other two fishermen survived the first 30 minutes by climbing on the keep of the boat. After another 45 minutes, they decided to swim towards the shore. The water was 5 C cold and the distance was 6 km. The other two swimmers disappeared after 10 minutes of setting off and only Guðlaugur was able to survive for 6 hours in the freezing temperatures of the water wearing only a shirt, sweater and jeans. His head was clear all throughout this “expedition” and he followed a lighthouse on to the shore. 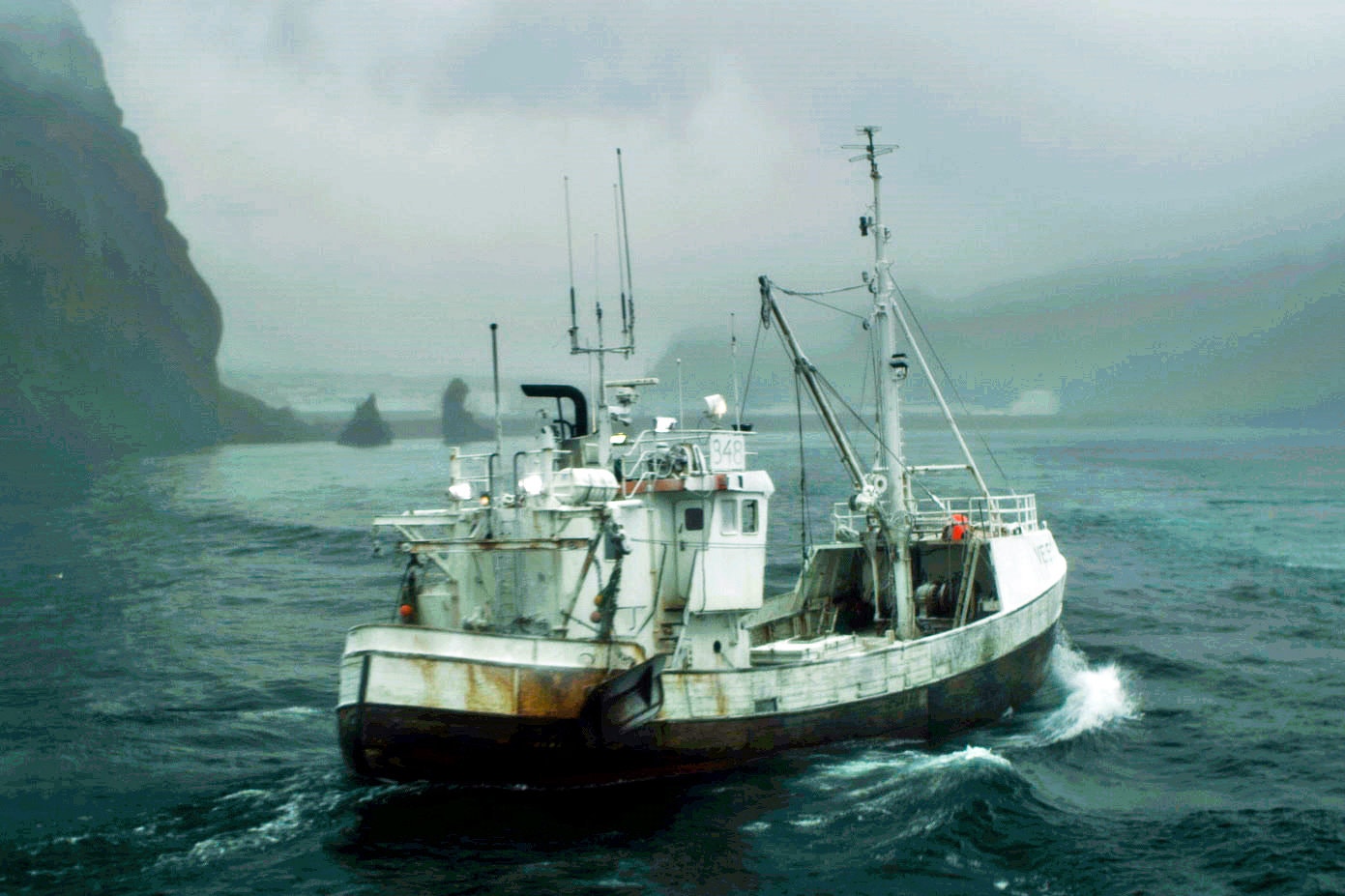 A scene from “The Deep,” a tale of an Icelandic’s sailor’s ordeal directed by Baltasar Kormakur

Once on the shore of Heimaey, he had to face yet another challenge: he would need to walk with bare feet on volcanic rocks for more than 3 kilometres, while the waves were hitting hard on the coastline he was traversing. Nine hours later, he knocked on the first door he could find and was taken to the hospital. His body temperature was below 34 C. Hypothermia begins when your body temperature gets below 35 C. Nevertheless, he didn’t have any symptoms of hypothermia or vasodilatation, only dehydration. The 23-year old, 124-Kilograms Icelandic fisherman had phenomenal resistance to cold.

An average man would survive in 6C water for about 75 minutes. In controlled tests, subjects can only stay for up to 30 minutes in cold water before they begin to suffer adverse effects. To swim 6 kilometres in 5C water would have been suicide. Nevertheless, staying on the keel in the sub-freezing air temperature while their clothes were wet was no option at all.  So, after a short deliberation, the three men decided to take the risk and swim. How could Guðlaugur Friðþórsson swim for 6 hours in extreme temperatures while his fellows succumbed after 10 minutes?

The first thing Guðlaugur did well was control his breathing. Gasping and panicking when faced with the cold water will only make the cold shock response stronger and cause your body to lose temperature much rapidly.

The Icelandic survivor said that he managed to be clear-headed all throughout the swimming. His presence of mind might have saved his life. When he arrived at the hospital, 9 hours after his ship had sunk, he was treated for cuts and dehydration; the doctors found no sign of hypothermia at all.

Friðþórsson is a very tall and stout man. He is 193cm tall and 125 Kg heavy. His abdomen was wrapped in a thick layer of fat, of about two and a half centimetres. Nevertheless, how he managed to stay warm puzzled researchers who concluded that he maintained his normal body temperature almost the entire time. 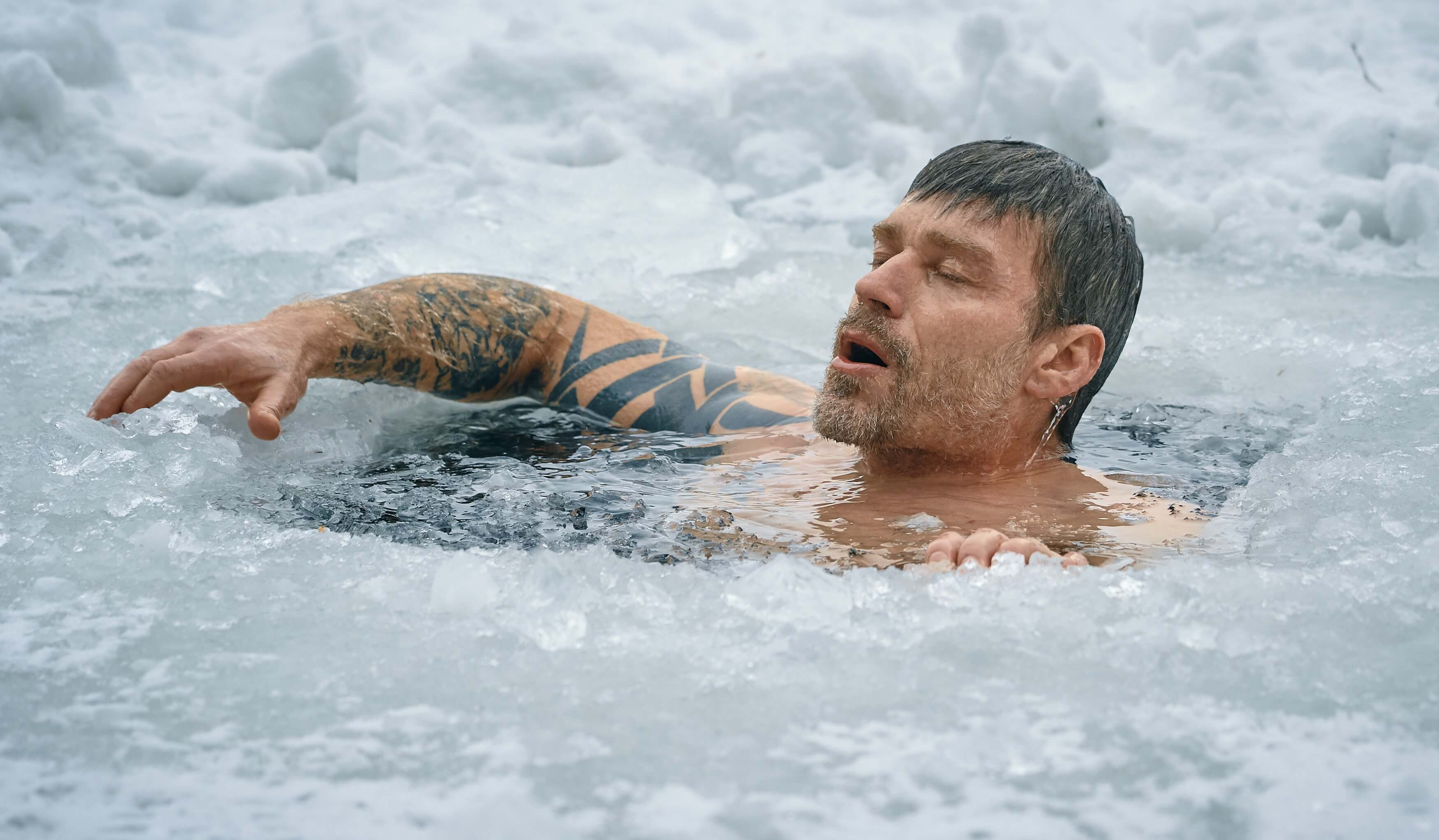 Meet the human body and his many surprises!

A very important and overlooked concern in freezing environments is dehydration. It seems strange that you need a drink of ice-cold water when you’re actually freezing in the wilderness, but you do. Actually, the air in sub-zero temperatures is very dry; there is almost no moisture in the air at freezing temperatures and every time you breathe, you actually lose very important fluids that your body desperately needs in those conditions. However, cold annihilates our sensation of thirst and breathing heavily to stay warm will quickly leade to dehydration.

Nevertheless, in our Icelandic fisherman’s situation, dehydration was not the real problem; hypothermia was. His clothes were wet and that made matters worse. He could keep his core temperature in acceptable levels if he kept exercising/walking, but stopping to take a sip of ice-cold water could have cut off his muscles and body for good.

The truth is, you can keep your body warm if you exercise enough. If you exercise hard, you can even do it in t-shirts and shorts. Shivering is also a reasonable light exercise to keep your blood flowing. However, when you’re at high altitudes, climbing high peaks, things change because your mind is affected. You might get disoriented and weak and taking one step every 10 seconds is not exercising hard enough to keep your body warm. It’s a chain of reactions that will get you down, eventually, both mentally and physically. 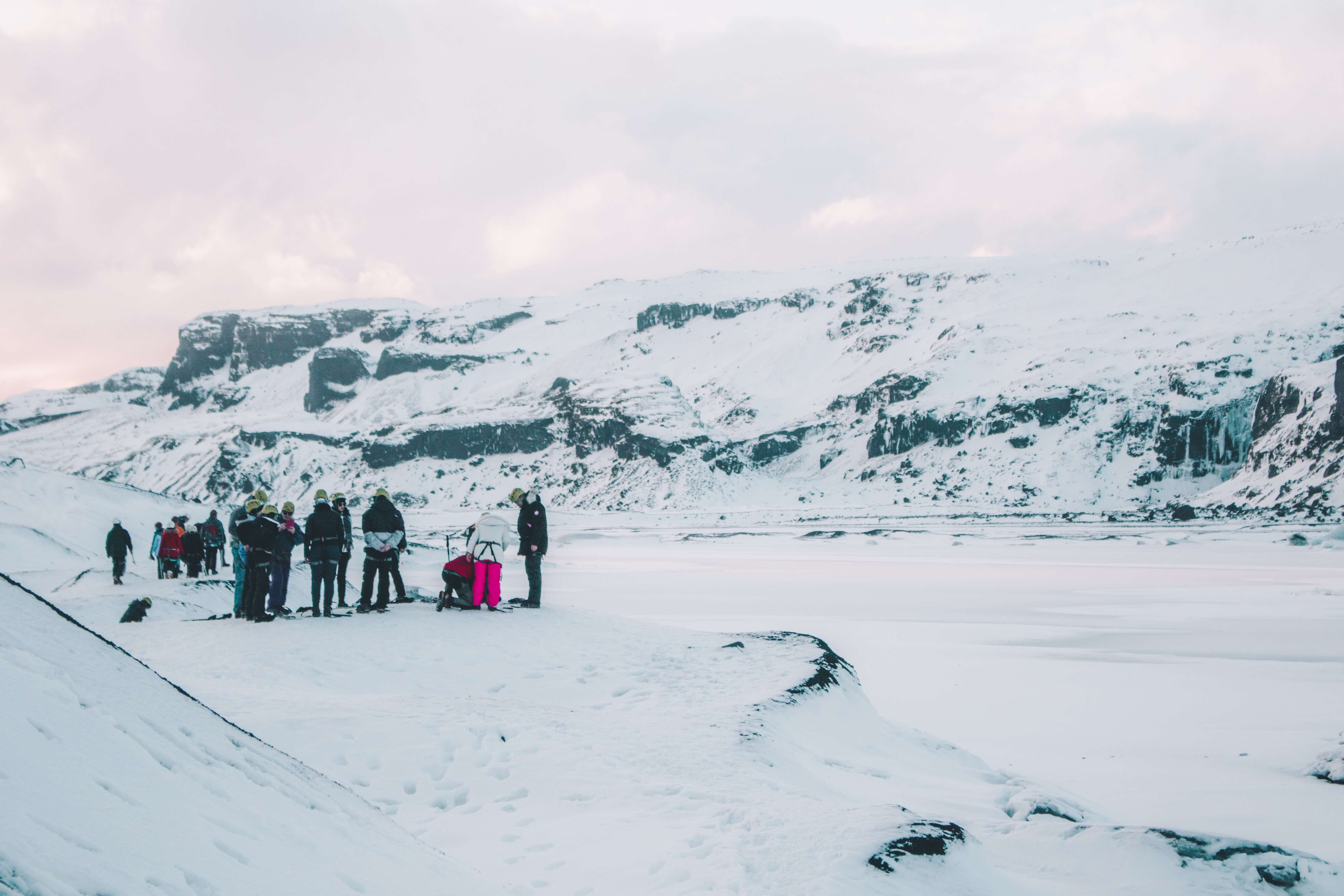 Our body has advanced survival strategies for extreme conditions

It does and it does that by keeping the most essential organ of all up and running – the brain, at the expense of other less essential body parts. When in extreme freezing conditions, our body will reduce blood flow circulation to the hands and feet in order to preserve our body core temperature. The process is called vasoconstriction and can lead to necrosis or cell death in the extremities; it’s the frostbite. At around -0.5 C the human tissue freezes. The cell walls break and that is when it begins.

However, this was the story of the man who managed to swim for 6 hours in almost freezing waters without suffering from hypothermia and he is still alive today. An Independent Icelandic film was made to tell his story and you can see the clothes he wore at the Eldheimar Museum on Heimaey. His story is indeed remarkable.

Via BBC and Wikipedia