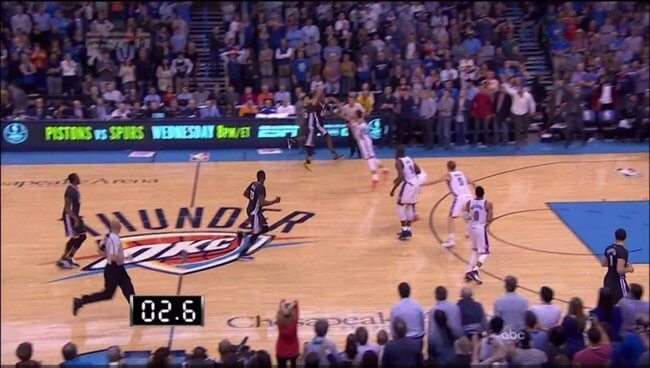 In a game that had an atmosphere of a Western Conference Finals, the Golden State Warriors beat the Oklahoma City Thunder with yet another ridiculous shot by non other than Stephen Curry winning the game from 38-foot 3-pointer buzzer beater!

Despite being on the losing side of the game in the fourth quarter, the Warriors managed to comeback just in time hitting two free throws at the end of regulation, When Kevin Durant lost the ball with the clock winding down to end the game in a tie and send the teams to over time, and that’s when things got really excited.

With seconds left in the game, the Thunder missed an important shot and the Warriors pushed the ball up the court instead of playing it safe and call a timeout. That’s when Curry got the ball and won the game with an amazing shot from 38-feet away! Swish

Curry was exceptional as usual breaking more records. That last shot was his 12th 3-pointer of the game, tying the NBA record. During the game he also broke his own record for 3-pointer in a season with 288. And the team still have 24 games left to play in this season, how much more can he get? This was also his 11th game with 40 points or more in the season, WOW

You earned this dance Curry

Related ItemsnewsOMG
← Previous Story The Snorlax Cushion Of Your Dreams Is Here, And It’s Really Big
Next Story → 10 Painfully Obvious Truths Everyone Forgets Too Easily