What’s your average day like? Well if you ask Hafpor Julius Bjornsson, better known as The Mountain from Game Of Thrones, the answer will be ” pretty normal”. Get up in the morning, play some fun games with cute puppies, eating seven chickens in one meal, hanging out with some cute lions, carrying refrigerators for fun, doing some aerobics with Conor McGregor, throwing around beer kegs, maybe breaking a 1,000 years old weightlifting record i don’t know…you know regular stuff. I also enjoy working out, eating, working out some more, eating again and than eating some more. You probably already guessed it, there’s nothing average about Bjornsson, because he’s the Mountain! And now he asks you to drink his Vodka, Icelandic Mountain Vodka, Do you like it? ( Please say yes we don’t want to die )

According to Mountain Vodka, the Icelandic Mountain Vodka is ” distilled seven times so it feels extra smooth while still standing strong at 40 percent alcohol, it is also made with pure Icelandic water and is gluten-free.”

Vodka is just the first of many the company says, ” The Icelandic Mountain Vodka is the first of four products that we have tied together. The products are based on the old Icelandic legends of the guardians or the Icelandic Spirits. The giant ( Mountain Vodka ), the dragon, the eagle and the bull. Legends say that these four creatures protect Iceland from its enemies. ” 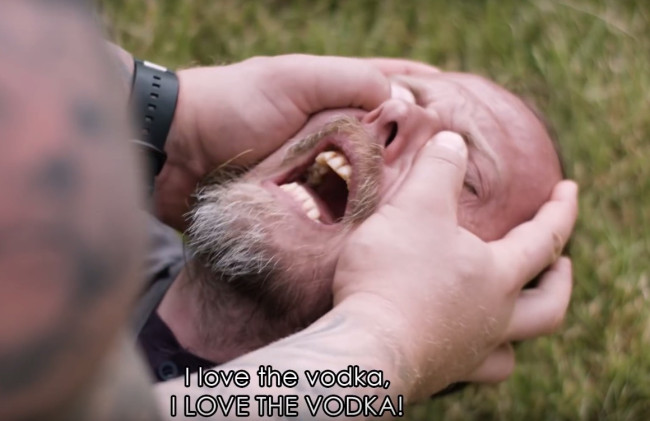