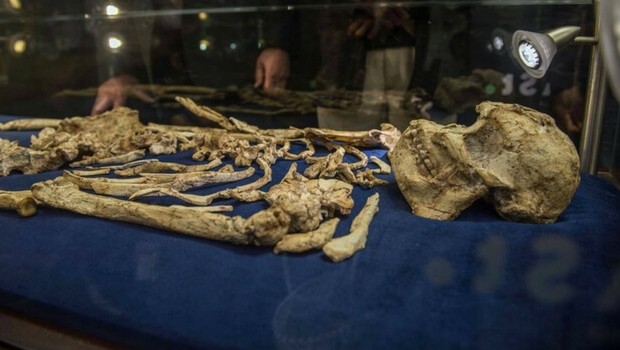 “Little Foot” took more than 20 years to assembly. And he’s some 3.6 million years old. The waiting was a piece of cake for the oldest hominid skeleton ever found in Southern Africa.

Starting with December 6, the world can witness an Australopithecus fossil at the Hominin Vault at the University of the Witwatersrand Evolutionary Studies Institute in Johannesburg, South Africa.

“It has a lot of firsts. It’s the first complete skeleton adult, it is the first skeleton that has a complete arm and a complete leg in one individual that can be compared, and it is the oldest in Southern Africa” says Ron Clarke, one of the paleoanthropologists who contributed to the discovery.

The first foot of Little Foot was found in 1994, in a box of animal bones from South Africa’s Sterkfontein Caves. Since then, scientists have worked hard to bring to late the current skeleton.  There are more than 25 scientific papers written on the research that are about to be published next year.

“This is one of the most remarkable fossil discoveries made in the history of human origins research. And it is a privilege to unveil a finding of this importance today”, said Clarke in a press release.

This is quite an exciting discovery for scientists and us. Would you like go see a guy that’s been dead for nearly 4 million years? He might be “Little Foot”, but he seems more like “Big Patience”, waiting around for this period of time…. Now we’re just kidding, but, good job, guys for finding him!

Related ItemsNaturenewsOMG
← Previous Story Portland Has a Hipster Santa With Arm Tattoos That Say Naughty And Nice, a Man Bun And He’s a Breath Of Fresh Air
Next Story → Matching Christmas Jumpers For Pets And Owners Will Make For a Good Christmas Portrait