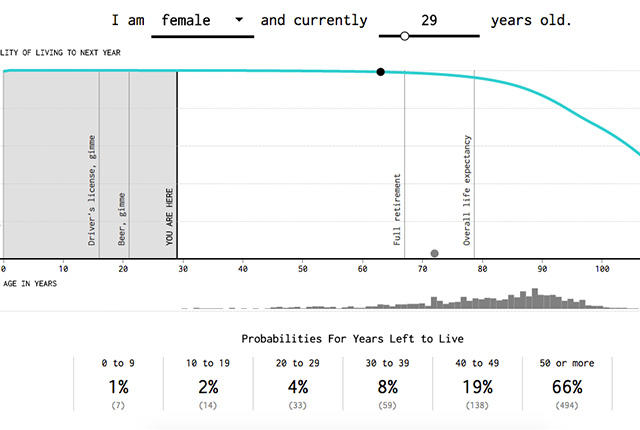 No one knows how much time they have left to live on this world, sure there are estimates, and according to the Centers for Disease Control and Prevention, it is said that women in the United States will live for an average of 81 years and two months, and men will live for an average of 76 years and 5 months. Now i know this information alone can freak you out, and it actually gives a pretty good ballpark estimate, but one man has created an interesting graph that will visualize how long do you have to live.

The man is called Nathan Yau and he says he can calculate the odds and it is fascinating to see it in action.Yau uses data taken from the Social Security Administration and with that simulate your possible lifetime. The graph itself looks like it shows several dimension all happening together as they fall like little black dots through time and space.

to start you will need to chose your sex, male or female, that is what the SSA has data for, from there the simulation will start to run and show you all the outcomes little by little at the bottom.

It won’t come as a shock to most that the likelihood of death will increase with age, and if you’re around 50, your life expectancy is very unclear ( sorry ). But one thing that is really interesting about this graph is if you’re in your 70’s or older, here’s what Yau says ” Life expectancy increases and the balls tend to drop farther past the overall life expectancy point. As you shift into later years like is like ‘ Hey, you’re pretty good at this aging game. Better than most. You’re probably going to live longer than the average person'”.

I run the test on myself, and like i thought i was not surprised to see that most likely i will live to my 80’s. But there is always that little chance that things will turn out differently than what you expect. and that is exactly what life is all about, these unclear feeling that you can die at any moment.

Here’s a link to the graph

19 Photos That Totally Mastered The Art Of Perfect Timing